Hello everybody.
I represent my native tree Quercus robur
Collected in April 2018 two miles from my home. For two years I sat in the garden without moving and was sick.
I got tired of this and in March 2020 I transplanted it into a container. When transplanting, I saw that the roots of the oak did not change during these two years. Only the place where the taproot was cut was covered with callus.
All summer 2020, I fed him on a leaf, because there were few sucking roots. And kept it in full sun. The stump is overgrown with twigs, and this is the end of the season for the oak.
On March 30, 2021, I dug a container with an oak tree out of the ground where it hibernated. And by chance, when he was stomping there, he broke off one branch.

I loaded the tree into a wider container. Cutting only those roots that were already going in a circle.
I didn't like the long, straight stick on top and decided to cut it off.
Then I cut off the terminal buds on the upper branches, except for the topmost one. Since I'm not sure what on the remaining piece of the stick, it will awaken the dormant buds.

Then I put wires on the branches that I plan to leave in the future. If the upper stump does not awaken the dormant buds, then the angle of the upper branch will be changed.
And if he awakens, he is also changed.
After the leaves appear, I will update the topic.

On 17.05.2021
The oak did not want to follow my plan and did not awaken the dormant buds on the stump. He began to awaken them under her, on the back of the large cut.
The upper branch was pulled to the stump, making it more vertical. From it I will grow a new peak.
Of course, now I am thrown back, having lost a piece of wood with an old bark. But the even long stick, which was on top, is a defect that needed to be removed.
I chose the new bud that was closest to the broken branch. The red circle is a trace from a broken branch that was in the right place. The green circle is the selected bud for the growth of a new branch, which is not in the very right place

As of May 30, 2021.
The oak opened its leaves two weeks later than the other Quercus robur. He does this every year. I used to think that he was sick, so he wakes up later. I was wrong. I have another small oak tree from the same grove. So, this small oak tree also wakes up later than the others.
I also thought it was the winter form of Quercus robur. But the winter form, yes, wakes up later, but hibernates with dry leaves, like beech. This leaf sheds at the end of autumn. Apparently, this is such a mutation.
I usually keep the harness on all types of oaks during the growing season for about a month. It is convenient - I put a wire, timed 30 days, removed the wire - the form froze.
But now the energy has gone to a new peak and it quickly spread out in thickness. He removed the wire ahead of time, there were traces, but the oak forgives and delays this.
======
The next photo - oak in new leaves, looks cheerful.
On those branches where I cut off the end buds, branching and a small leaf went. But the small sheet is not important to us now. You will have to direct the energy to the top so that it becomes thick and beautiful. It will take a lot of time. 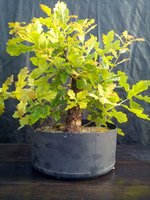 Second wave of growth.
Now I want to pump up the tree with energy.
Therefore, I allow him to grow freely. I plan to prune and remove unnecessary branches in the spring.
N

I fed this oak with fertilizers containing nitrogen until the leaves fall. To test the theory read on this forum. Which says that this method provides a powerful spring start.
Visually, the oak is well prepared for the winter, the branches are ripe, the leaves are thrown off in a timely manner.
In general, I am satisfied with the development of the tree in 2021. The tree has grown stronger and more powerful.
Yes, at the beginning of the summer, one young branch was torn off by a strong wind, but in the spring of 2022 I am planning a strong pruning and removal of the lower sacrificial branches. That, in theory, should give the awakening of dormant kidneys.
========================
photos dated November 10, 2021 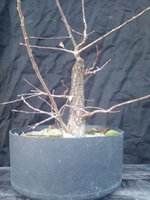 In April I did a heavy pruning and removed the lower sacrificial branches.
The upper branches began to grow in thickness, so they were cut shorter.
photo from 25.04.22 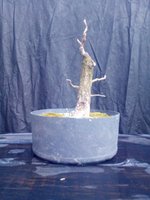 Until the end of May, I just watched what the oak was doing.
The oak directed the main efforts to the top and slowed down the development of the side branches, which did not suit me too much.
And I cut pieces here and there to make it grow more evenly.
photo from 30.05.22 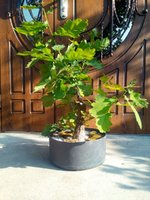 Next to the removed sacrificial branches, new ones have grown. I decided to use them to tighten scars.
But this can be done endlessly - instead of some scars next to create others. And waste the energy of the tree.
Photos from 14.08.22 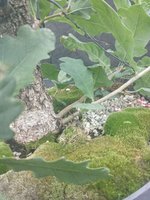 This large cut is the most problematic part of the tree. I don't plan on making a carving to somehow beat him.
It tightens, but slowly. I think that strong suppression of apical growth will further delay healing.
Therefore, after pruning in May, I do not touch the top.
The explorer marked in red I plan to remove next spring. Yes, it's another scar, but a cone would be better. 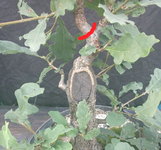 In general, this season's pruning was aimed at weakening the upper branches of the old trunk and developing a cone and shorter internodes on the middle branches.
Two young skeletal branches were slightly affected. 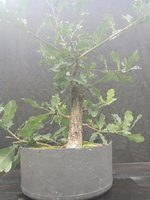