English Yew as all of you know has a long and illustrious history here in the UK, a few still alive date back to well before biblical times and they have been important in religion, medicine, even our armies (via the longbow) etc etc.

Unless I quickly find something more pleasing, I am gonna go with this nursery topiary blob that was hiding in the clearance aisle with the half-dead stuff. Still a baby, probably too straight and i haven't seen under the soil line yet, but could make an interesting project let's see! Wish me luck! 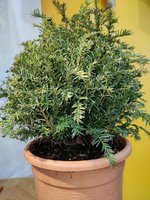 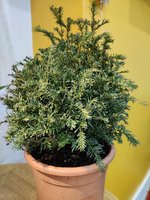 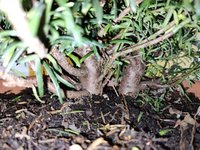 This weekend I got my Taxus out of it's nursery container and into some better substrate. This is only the 3rd or 4th time i've done that with pre-bonsai in mind, documenting here for my own records too! The plastic pot was really tough gauge so couldnt trim down gradually, in the end I just pulled it all out and went all in for the repot ahead.

The nursery soil was the heaviest, dankest mud I've seen yet. Very heavy and claggy but came away in big lumps. Seeing this and the huge number of vine weevil grubs reconfirmed my idea to get rid of it all and start fresh, repotting into an ercol pot with a mix of pumice, akadama and bark. I did not wash the roots, and mixed a really small, clean amount of the old soil with some organic bonsai mix, spoon of rootmore and included this too. I guess old habits die hard re. organic matter plus I found the 7L ercol had really large holes in the sides and without a bit of 'binder' bits were falling out!

I potted at a bit of an angle partly for interest, partly because thats the way it went! I hardly pruned any roots or twigs at all unless really in the way, let's say ~10% root prune including what dropped off accidentally. There was less fine feeder root than I was expecting, mostly on one side, and some thick, straight roots that looked to have been trimmed all to same length in the nursery process, increasing root volume but offering little in terms of feeding it seems - i trimmed a bit and they are alive but i guess i could go much harder on these in future repot.

Regarding future nebari, there was a bit of flare down there, now covered with topdressing, probably artificially enhanced by the triple trunk we have now. Still undecided on the best front and where to go from here, but I'll spend the next few months looking and imagining! Overall from what I saw under the soil line I think short-term is just leave and maintain, get the roots healthier before any more major stress.

I am just relieved this guy is out of the muck and pest larvae, hope i see positive response to that this year! 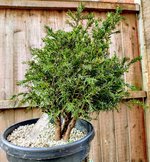 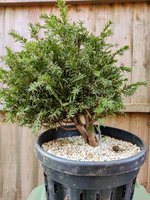 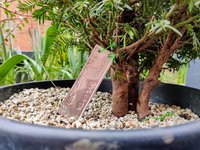