I've been playing round setting up a display involving these two trees, a cascading shohin Field Maple (Acer campestre) and an informal Sloe / Blackthorn (Prunus spinosa) which is slightly larger than shohin size. Any constructive criticism welcome. My own self-critique is that the elements are a bit cluttered together and should be spaced more widely. The cascading tree probably needs to be closer to the scroll to emphasise the link between the mountain scenery and the cascading tree (though it might be difficult to do that without having the scroll off-centre). The sloe should maybe be on a lower stand. Maybe lose the accent. What do you think? 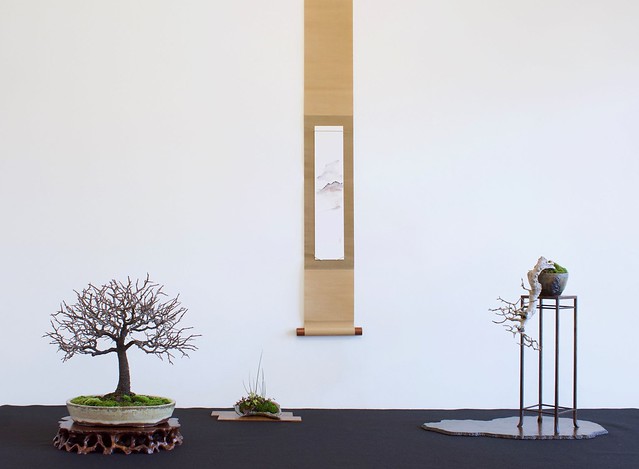 Very nice display. Everything is just right except the primary stand. Just doesn't fit. I would push the primary tree back and push the accent forward. Very nice elements. I'm just so, so in math but I think you have four points?? A three point display depicts Man, Earth, Heaven. You have added Child!

Thanks Al, that makes sense.
What do you think about this stand under the Sloe instead? 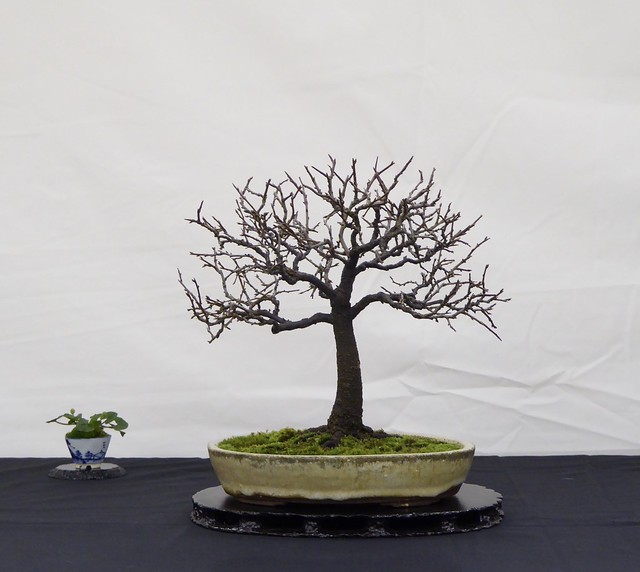 (ignore the accent in this one, it's from a different occasion)

TomB said:
Thanks Al, that makes sense.
What do you think about this stand under the Sloe instead?

(ignore the accent in this one, it's from a different occasion)
Click to expand...

Choose either an accent or scroll. The accent appears to be too big. And it’s placement near the scroll appeared to be accenting the scroll rather than either of the trees.

I would love to compare it to a traditional stand. That looks much the same. You also need a little height in the stand to elevate the primary piece.

Nice field maple and interesting display. I would think about loosing the accent plant. Maybe a very small element could be added to the point of the jita under the maple? A teensy thing. And I also don't care for the stand under your primary tree, it's too heavy feeling for the tree for me.

I am not sure if it is the angle the picture was taken but when I first saw it my focus was on the stands that each piece was put on. I did not even notice the trees and plant. It seems like the scroll is towering over everything and makes the tree seem less vertical if that makes any sense.

I like the scroll and the Amur with it's display elements. Maybe like @JudyB suggested, maybe a small "fauna" figurine or something like that, right at the end of the wood slab under the Amur. Maybe avoid any accent that's flowering or has too much green in it. Elements here to me, harken coming winter, use something seasonal to accent.

Four point? I think a conifer should be in there somewhere.....

Nice stuff, all around though......thanks for a thought-provoking post!! Cheers.....as I down ANOTHER hot rum cider!!!!!!

LanceMac10 said:
I like the scroll and the Amur with it's display elements. Maybe like @JudyB suggested, maybe a small "fauna" figurine or something like that, right at the end of the wood slab under the Amur. Maybe avoid any accent that's flowering or has too much green in it. Elements here to me, harken coming winter, use something seasonal to accent.

Four point? I think a conifer should be in there somewhere.....

Nice stuff, all around though......thanks for a thought-provoking post!! Cheers.....as I down ANOTHER hot rum cider!!!!!!
Click to expand...

I, too, would like to see a conifer in the display, but I bit my tongue! Lol!!!

I would also agree with the Bananaman that the primary tree could use more height, except that the secondary tree is a cascade. Which implies it’s up higher on the mountain. So, it should be higher.

Which led to the thought: the two trees are not equal in size. The maple cascade appears, visually, to be much smaller than the Sloe. Even though the trunks have about the same girth. Hmmm...

Which brought me to: would a tall root stand work better for the maple? Maybe, maybe not. It might obscure the fine twigs of the maple.

So then: maybe remove the scroll. Even though it is seasonally correct. Which leaves us with an accent. Which tree do you want to feature? If the maple, perhaps a tiny accent plant on the jita. If the Sloe, then an accent with movement towards the Sloe.

A tall skinny scroll with a short wide display is disturbing, IMHO.

I like the setup and I know how difficult it is to pull it off...
Points of attention for me would be:
Scroll is to big and too centered. It is also a somewhat Japanese looking scene. It doesn't match the tree species.
Stand of the Prunus is similar in colour as the jita. It is also irregular as is the slab under the maple. I would like to see a light real table under it.
The maple should be bigger and higher or te Prunus smaller.
Following the lines of the plants, it should flow to an accent or an interesting point.
Keep up the good work and keep puzzling.

Thanks to everyone for the comments so far - some interesting and useful points. Here's some more food for thought taking various suggestions into account. @Bananaman this is the best sized 'normal' table I have - I think a low, delicate ladder style one would work better as this is a little heavy. @Adair M this is the tallest root stand I have. And I don't have a handy conifer to slip in The accent in some of the pictures is wrong (too bulky) and is really just there as a placeholder for the images. I'm seeing the maple as the focal tree, even though the sloe is bigger - moving it to the rear of the display has balanced the relationship between them a bit better I think. 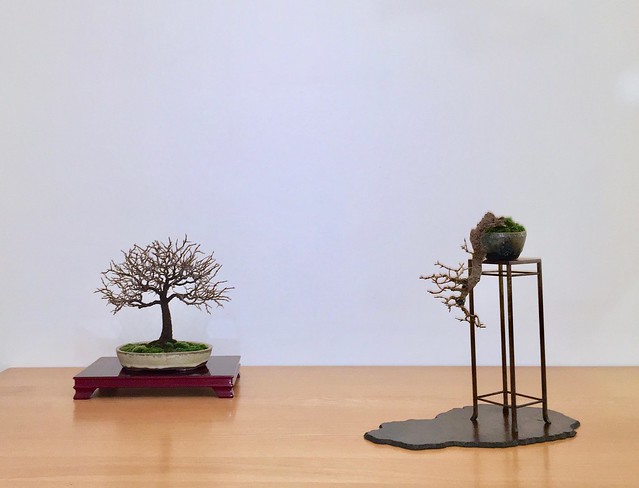 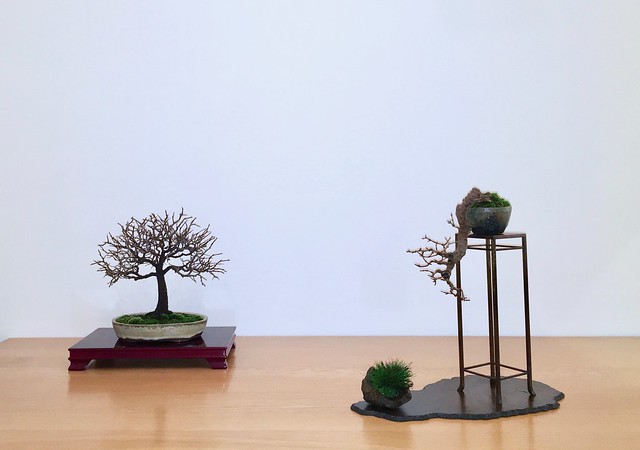 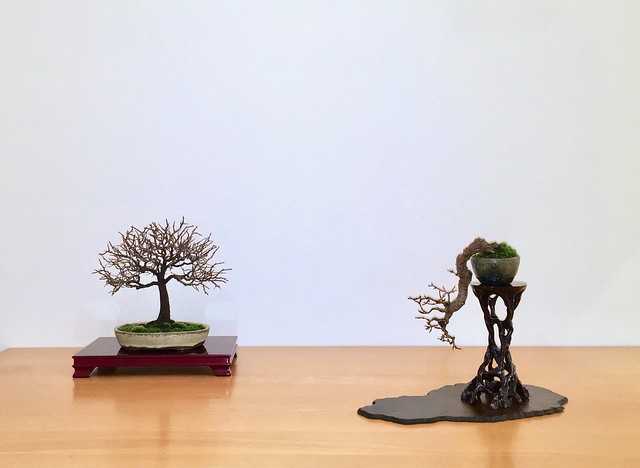 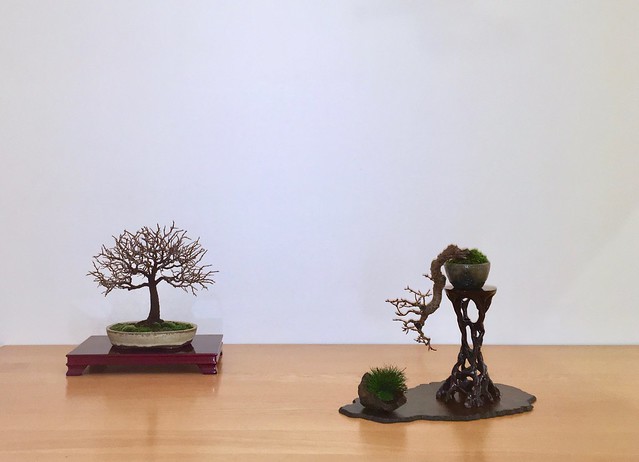 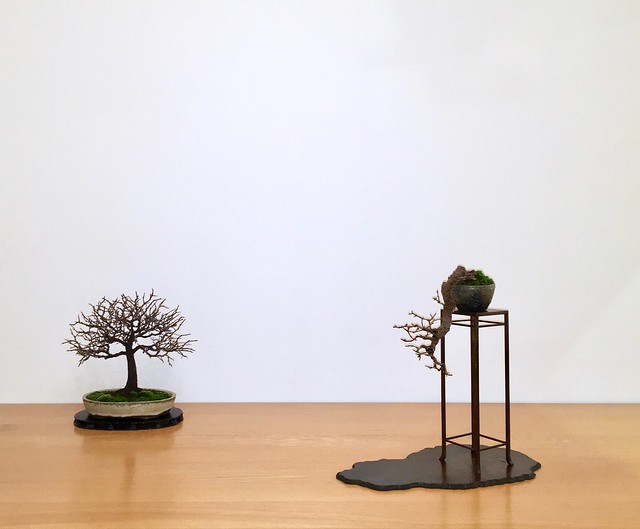 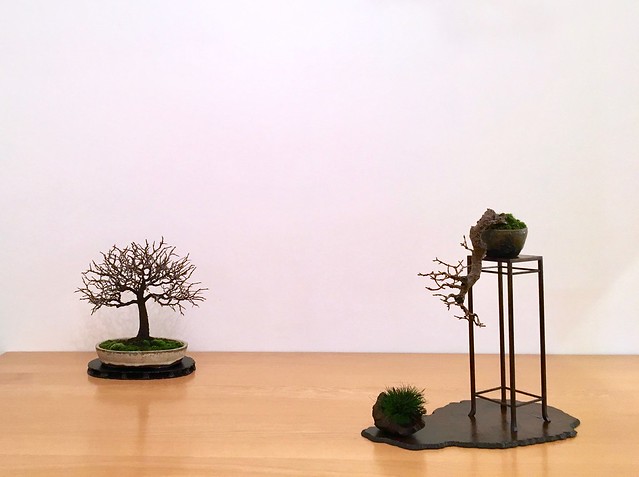 I think my favourite of these is number 5. Sorry about the image quality - phone camera shots in poor lighting. The lines on the stands are straight, just distorted by the camera angles. Further views welcome of course.

Al will give you some real help with this. I just want to say that I like the cascade on the straight legged stand with the accent on the jitta below = very nice, IMHO. Your tall/long thin scroll would play nicely with it (not saying anything about the content of the scroll) were you wanting to add such an element to the display

I guess your objective is to add more elements. The tree you've chosen is simply too large, IMHO.

Now I await some informed discussion. Thanks for the thread ?

The last two images are my favorites. Do you have a slightly smaller accent?

The Sloe has a very slight bit of movement, away from the maple. Can you turn it around? That way the movement would be towards the maple.

Even with the awkward stand the very first composition is still the best. I like the trunk (on the cascade) in the first picture, the angle and the fact that it is dry and white.
P

Prefer#6 but with Cascade at back and smaller accent. Kudos for effort.

The accent on the slab makes the maple take more visual weight and that is what you want. Putting the prunus on the stand makes the prunus more the center and you don't want that i guess. The pictures are made a bit from above. The maple will gain height when taken more at eye level. For stated reasons i like picture 6 the most. Can you try with the big slab under the prunus with an accent, place it in front and the maple farther away? There is a big contrast between the two tree styles and this makes for a big tension. Something has to bind them together. Now i still have the feeling it are two different setups. I like it more without the scroll, don't know how you feel about that?

How about the root stand and then the slab from 5&6?
Like #4, but with the slab under the sloe. I really like how the root stand sets the trunk away from the legs, so you see all that wonderful movement on the maple. Dig that root stand! The accent I like, but seems still a bit too big.

So to explain the sample above, and how it is pertinent to fix the OP's first display.
The first picture is the original display.
The Main tree is a Black Pine 黒松 in a Moyougi 模様木 (informal upright) styling on a Rosewood midsize table.
The accent is a Himeshara 姫しゃら in a Kabudachi 株立ち styling on an irregular shaped informal slab (Sou no Sou).
The scroll is the image of a Nightingale 鶯 perched on bamboo.

The revised display by the Sensei is the lower picture.
The Black Pine and display are unchanged.
The accent is changed to a Plum (梅）that is just beginning to bloom in a literati (informal) slab on a round, finished rosewood slab.
The scroll is changed to a traveling monk with an alms bowl.

Important points regarding the changes. If you have not learned about the Shin 真, Gyou 行, Sou 草 system of formality in Japanese art esthetics some of the explanations may be difficult to comprehend. The formal species (Black Pine) with the formal styling (Moyougi) sets the tone for the entire display. Yes, I know in English we call Moyougi styling Informal upright, but it is mostly considered a formal bonsai style in Japan. The Himeshara in an informal style placed upon an informal slab is technically correct. However, the size of the tree and slab compared to the size of the main tree and slab causes too much competition and not enough harmony between the two pieces. Additionally the Himeshara in bloom is already an indicator of Spring seasonality and the Uguisu is redundant to indicate seasonality.

Changing to the Plum, decreases the size of the accent so that it no longer competes with the main tree. Additionally changing the slab to have a slightly more formal (technically this would be a Sou no Shin) jiita, helps to harmonize with the main tree and stand. The Ume in blossom also denotes the seasonality of the season, hence the removal of the Nightingale to not have redundant themes. Monk indicating Heaven.

Now...how does this relate to the OP's display.
The most glaring problem with the display to me is not being able to determine the main tree and the lack of harmony between the two. They are both main pieces in this context. Secondly, some have stated they feel the scroll is too large...but this is not my problem with the scroll. The field maple in the Cascade style is beautiful on that stand. But as another poster already mentioned this indicates elevation on a mountain. The picture in the scroll is distant mountains, and is a redundant theme in the display. Shooting for a winter display, I would keep only the field maple if the field maple can grow in elevated mountains, and put a scene in the scroll such as rabbit tracks in the snow, or a fox on the prowl...No other accent would be needed.
Last edited: Nov 28, 2018
You must log in or register to reply here.
Share:
Facebook Twitter Reddit Pinterest Tumblr WhatsApp Email Link