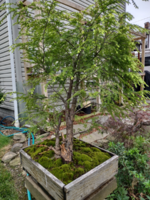 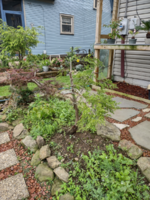 This one grew very well this season. I chose to cut it back pretty hard to take advantage of the rest of the growing season to heal the cuts. 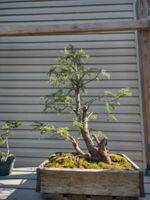 Plan was to leave it alone for the season but... it felt like it was ready. Plan to wire this fall. The other in the ground is lagging behind a bit.

Underdog said:
This one grew very well this season. I chose to cut it back pretty hard to take advantage of the rest of the growing season to heal the cuts.
View attachment 387852
Plan was to leave it alone for the season but... it felt like it was ready. Plan to wire this fall. The other in the ground is lagging behind a bit.
Click to expand...

Looking good. I like the Mother Daughter twin trunk thing you have going on.

Again apologies for crashing your thread earlier, if admin (@Bonsai Nut) could remove my earlier posts.

What kind of mix did you use when you boxed it up? Yours looks healthy, but I have really been pushing development using a Boonish mix plus some extra organics and some high nitrogen agriform fert tabs. You have a great start, by starting with good material and impressive equipment for collecting.
One other tip for developing Eastern Hemlock that I have figured out is: to stimulate back budding, let it grow all growing season with minimal cutting. Then trim back vigorously over the winter. You can’t expect back-buds on old wood, but you can get some back to where the needles were recently.
If I were in the 5 yr contest I would first address roots and design as you have, then I would do Winter trimming for a couple years as described, and then for the last year or two before the deadline, I would “pinch” or continuously cut through the growing season, in order to develop some density before the deadline. Not too dense though, your boxed tree is too elegant to go poodle style.

How are these two coming?

They are growing well. Sorry I missed your previous post. The one in the box is in DE. I had to check my notes. The fancy tree digger of my friend's was nice but not too precise. Next time I will dig by hand as I really missed the roots. I thought I had a ton of fine feeder root until working on them to find those pretty fine white roots were all weeds and very few attached to the trees.

I left a lot of the field soil/clay on the boxed one after nearly bare rooting the first one I put in the ground and panic set in thinking they would never make it. I still can't see a tree in the one in the ground but I too like the boxed one very much.

I appreciate you pruning tips. The boxed one is getting shaggy and I was going to trim soon. I'm rethinking as I may try to repot next spring to go after the clay and see what roots have developed or may give it another year in this box/soil as it seems very healthy. 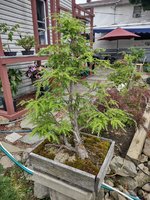 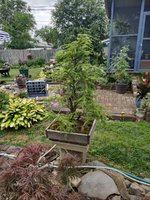 They both have pushed a second flush and these white striped needles developed recently. 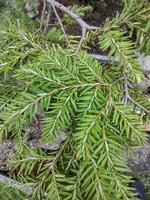 The one in the ground developed a lot of cones. I still don't have a plan for it other than build health and roots. 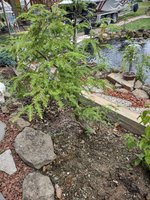 Looking good; Nice to see the strength developing. I think you’ll be ready for cutback and styling this fall/winter.

A few days after the last post in July I thinned out the tree again. Especially the outer branches and apex. Now that the heat of summer has past a third flush it popping out now. It has a surprising amount of new growth on old wood and trunk as well. I know this isn't what MrFancy recommends but...
Going to get some wire this winter. 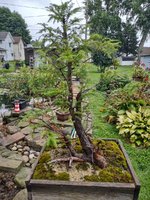 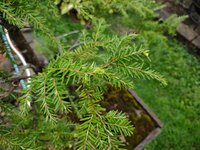 This is what was trimmed off in July. 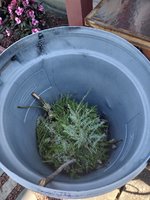 Wire this fall and maybe go after that clay in the roots next spring.
Last edited: Sep 4, 2022
You must log in or register to reply here.