Curious about this tree my father has had growing between his house and deck. I think it is an ash tree? Not sure if this species has much potential and I don't know how long it has been growing, but my father has been chopping it down year after year. I think it is possible he accidentally created a good starter for bonsai. Trunk is a little dirty so maybe hard to see but it looks like he has made chopped it three times. It is at least 2" in diameter, maybe close to 2.5". 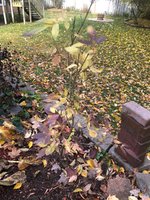 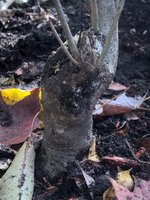 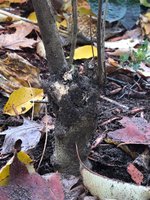 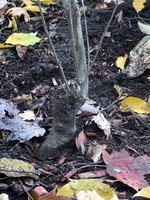 I am having a hard time understanding/visualizing what this new leader will do (or any leader perhaps) in terms of growth. The trunk seems to be growing into the leader which has created a nice little curve in the back. But what will it do in the next year or two? What will it look like? I am talking more in terms of horticulture and basic growth patterns. What are these wounds likely to do? Especially being so close to one another? Is it worth wiring that leader and bending it forward over the trunk (if possible)?

Full disclosure, I did move this tree last week. It was very difficult to get to and was growing in a lot of sand, it came right out and I immediately replanted it. The root structure reminded me of an insect or shrimp, long curvy roots. It's got more curves beneath the soil, probably could be moved up a little bit and have an even more interesting trunk, but I won't touch it again at least until spring. Is it reasonable to think it could be moved into a nursery pot at that point?

On a fun side note, I found this - tamarack? - while I was walking in the park the other day. Only one I have seen around here. It is huge! I assume a tree this old isn't going to air layer very well. I have also had a hard time finding what the law says about collecting things in local parks. I did ask the DNR for a permit to remove things and they never responded, they probably think I'm some kind of nut 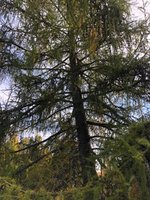 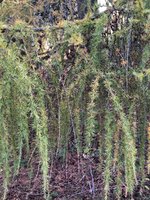 Go for it. Should have waited till Late Winter/Spring before growth starts. Why the big rush? Just about worst possible time to dig in your area. No recovery time for roots. Good trunk to start with at least. IF it lives.

Native ash is seldom grown for bonsai - do an internet search or better yet ask some local club members about growing them. You should get some insight. As for this specimen, it is frankly a poor example (reverse taper, obvious rot/possible pest or disease infection). Nothing wrong with playing around with it, but don't count on it being the centerpiece of your collection. Don't disturb it again this coming spring, give it time to grow out and recover. FWIW.

Larch are not routinely air layered.

DO NOT collect from protected public lands. Spaces designated as State & County Parks, Recreation Areas, Conservation areas, Wildlife Refuges, Botanical Gardens, and other such areas it will be unlikely you would get permission to collect trees. If you talk to the site manager, you might get permission to remove invasive species, but that would be an individual location by location decision. Fines and Penalties for collecting in Parks and Recreation Areas can be quite expensive.

State Forests are managed for eventual harvest of timber. You can get permission to collect in state forests. Again contact the individual site manager office to get permission.

Michigan does not have much public federal land, so the federal system doesn't apply. But it is possible to get permits for Bureau of Land Management and National Forests. Again, you need to contact the office of the site managers (ranger stations). National Parks, National Wildlife Refuges, National Monuments, collecting will be prohibited and carry stiff fines.

You best collecting in Michigan would be to find a friend or relative with privately owned land, and get permission from them to dig a few trees. Lots of family farms have patches of a few acres of forest. Perhaps you have friends that are deer hunters, you might be able to get permission from the owner of the property they use as a "hunting camp".
You must log in or register to reply here.

Accidental spruce seedling - what to do now?