I mentioned my dwarf trident maple (Acer buergerianum) in (another thread) recently. I decided creating a thread for it here in the maple forum would not be a bad thing to do, since information about the variety isn't particularly plentiful on the Internet. Its variety is either 'Miyasama kaede yatsubusa' or 'Miyasama yatsubusa'. I'm unsure if these are both the same thing by a slightly different names or if these are the names of two completely different varieties. I strongly suspect the former, as the latter would be very confusing.

I want to point out that I do not consider this to be bonsai yet. I'm hoping to create a somewhat larger tree with a much thicker trunk. The finished tree will probably be in the range of 12 to 18 inches tall, unless I change my mind.

Attached are pictures taken of it from summer 2008 to winter 2009. The first was taken a few minutes after I took it out of the shipping box. I wish I'd gotten some better pictures of the fall color before it finished dropping most of its leaves, because it puts on quite a show. The two leaves pictured were two of the smallest I found of what didn't blow away. I'm hoping these are giving me some indication of how much the leaves can be reduced once that time has come, but that might be wishful thinking.

2009 was an interesting year for all of my trees. We had a very hot and dry summer here. My Acer palmatum 'Aureum' had its leaves completely burned off during the worst hot spell and none of my trees even get sun for more than half the day. This trident maple dropped some leaves and the rest were burned pretty badly, but somehow it stayed cheerful through the ordeal. This may be because of almost daily waterings.

In the fall it rewarded me by blooming, at an age of 4 years and a height of 7 inches. As of today, these seeds are still in my fridge and none are showing any signs of sprouting. I'm hoping at least one makes it, just because the whole thing is so ridiculous.

This brings me to this year, starting summer 2010. The first batch of seeds matured. Of the 24 seeds the tree produced, 6 passed a soak test. It bloomed again this spring, but I guess it wasn't happy enough with conditions and it didn't carry those seeds to maturity. This may have something to do with the fact that I may have hit it with a little too much nitrogen when I gave it a good shot of fertilizer after it started leafing out. Otherwise though, it seems very healthy.

I did some work on it and moved it to a much bigger pot so it has more room to grow. Root work on it involved removing the small tap root it had, wiring it to the top of a flat rock and marking 6 of its longer radial roots so I can find them easily later. It hasn't put out any new foliage in the 3 weeks since I repotted it, but it's growing roots like crazy. I've seen 3 white roots pop out on top of the soil surface and I've had to cover them over with soil. Two were underneath the rocks and shells in the pot, but one was actually trying to jump a crack in the soil. It had nearly succeeded when I buried it.

kaede is japanese for 'maple'. So, they are one in the same.
D

I'd still love to know which is technically the correct name. But I've learned to accept not knowing for sure.
P

I have one miyasama yatsubusa kaede too, which make some flowers each year

I had two beautiful miyasama yatsubusa until last year, I managed to kill my favorite one which was growing on a rock ---> I can't tell you the pain.

I have one 'field growing' and healthy. As nervous as I am, I plan to move to a a Pot soon.

I have a few of them that I've been growing out for a few years. I'm curious if you think you can get a much thicker trunk on these. I've been growing mine for years now, and they tend to grow tall and fast, but not put on any caliper.

mcpesq817 said:
I have a few of them that I've been growing out for a few years. I'm curious if you think you can get a much thicker trunk on these. I've been growing mine for years now, and they tend to grow tall and fast, but not put on any caliper.
Click to expand...

Mine actually thickened up quite a bit since I got it. 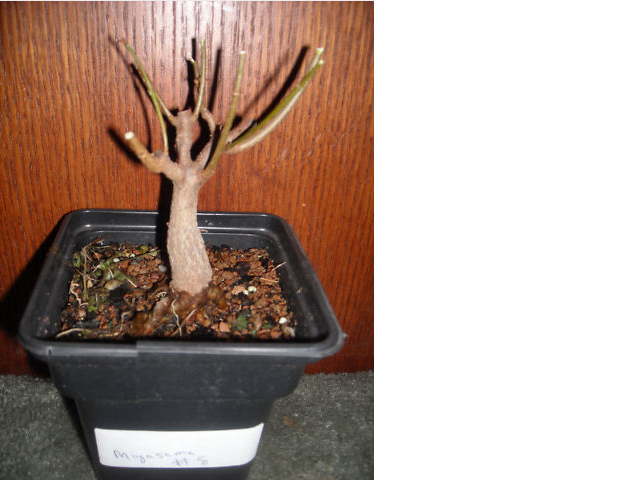 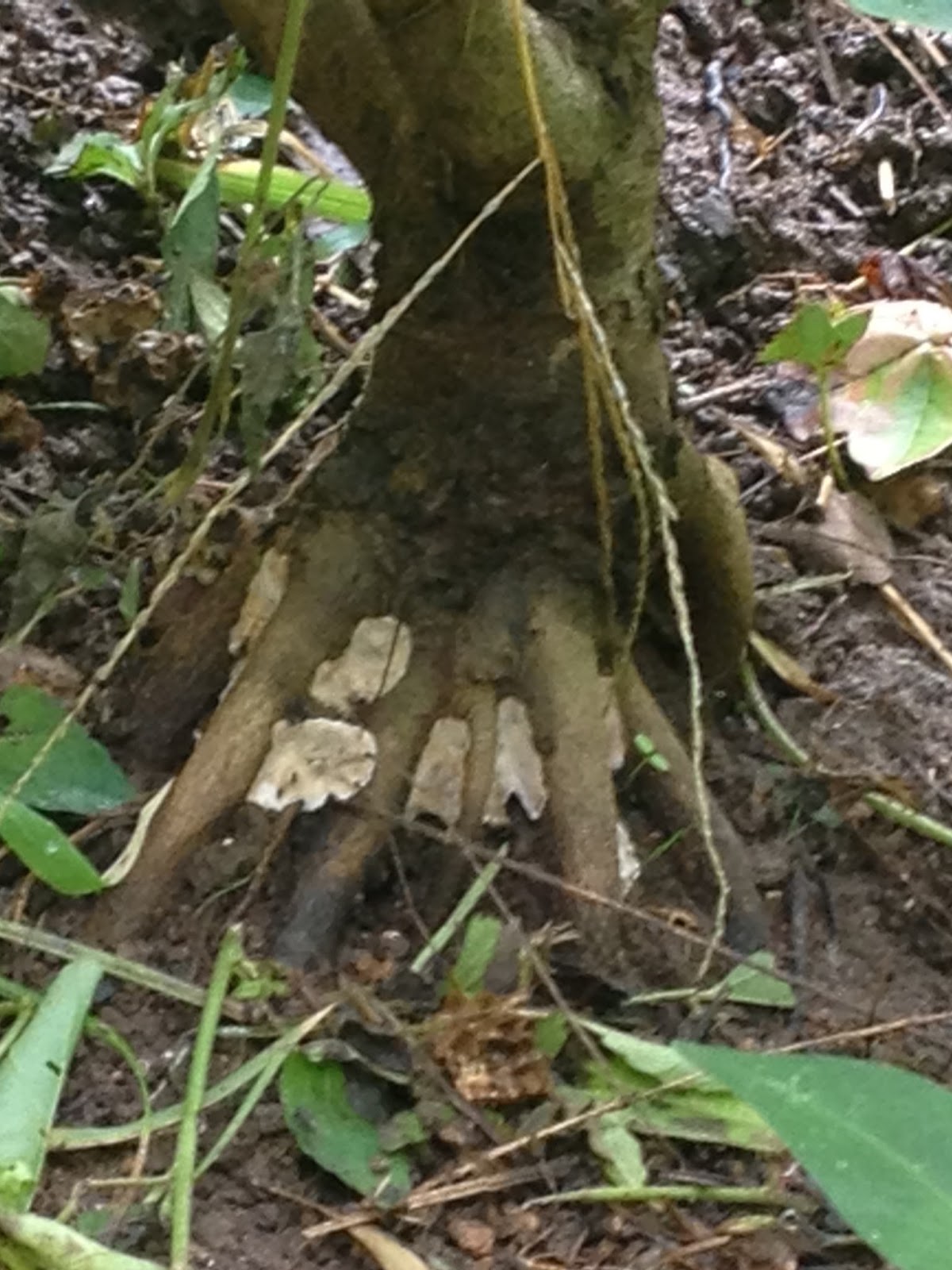 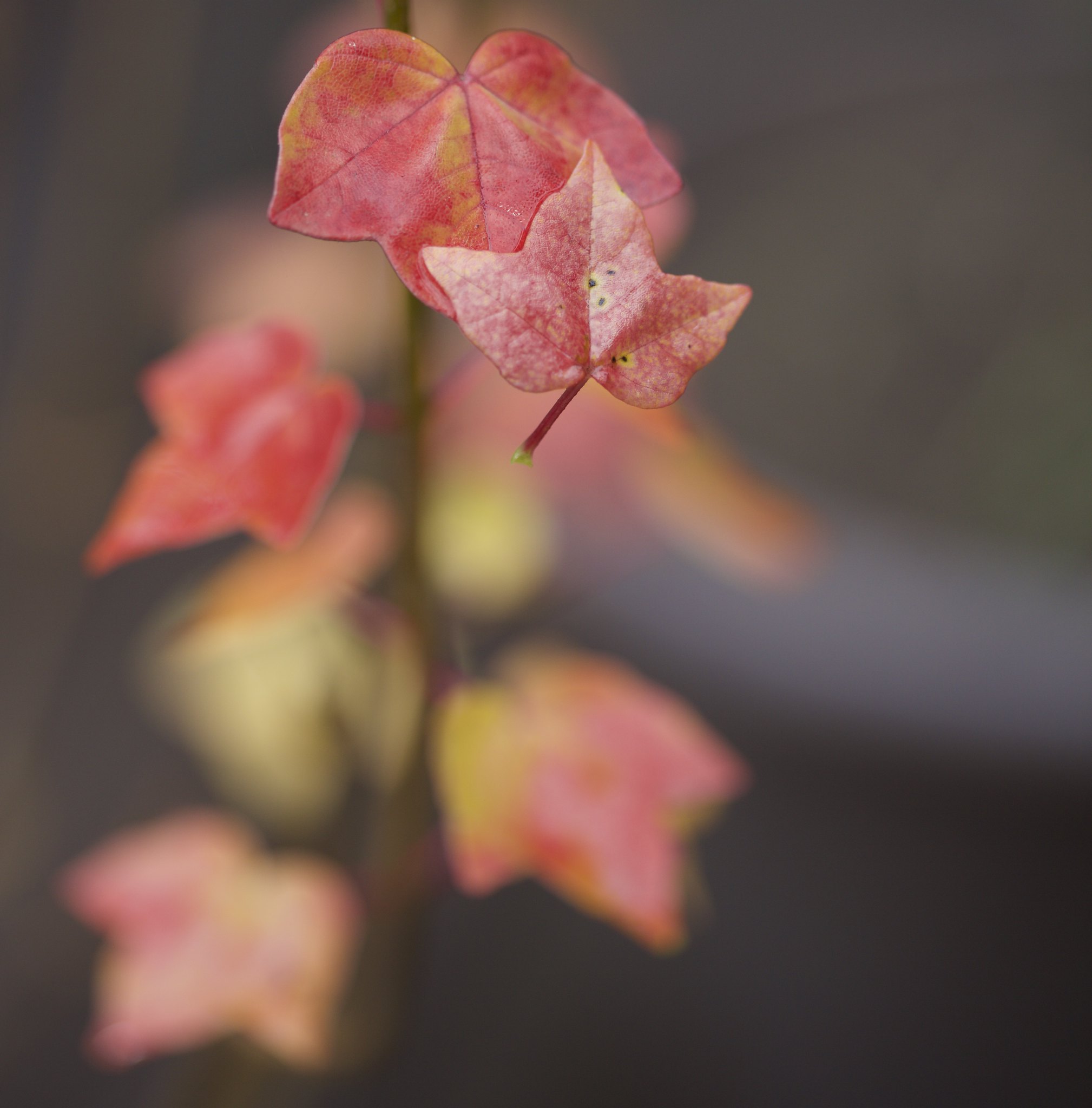 Hold on, to me as we go by Bahketni, on Flickr

They are so beautiful!

I have this old strain of Trident that gets really short spike like branches, I will find out what it is exactly tomorrow , there are so many long names I forget what is which.

Have you ever heard of Acer Truncatam? They are great for bonsai, but I still looooove Tridents!

Stickroot said:
Have you ever heard of Acer Truncatam? They are great for bonsai, but I still looooove Tridents!
Click to expand...

Actually I never have ... Just googled and it looks really nice! Is that what is yours (photo above) ? Looks very nice ... by the way, is it on a bottle cap? lol

That is a Trident that is in the cap, I don't have a pot yet, looking for one. I love tiny trees, mini Mame I guess.
I am going to be taking cuttings on the Truncatam next week at the nursery I play in, there are about 20 there all different sizes.
So did you notice how the Trident has short fat tapered branches?

This I have know idea other than green and red variegated Jap maple? 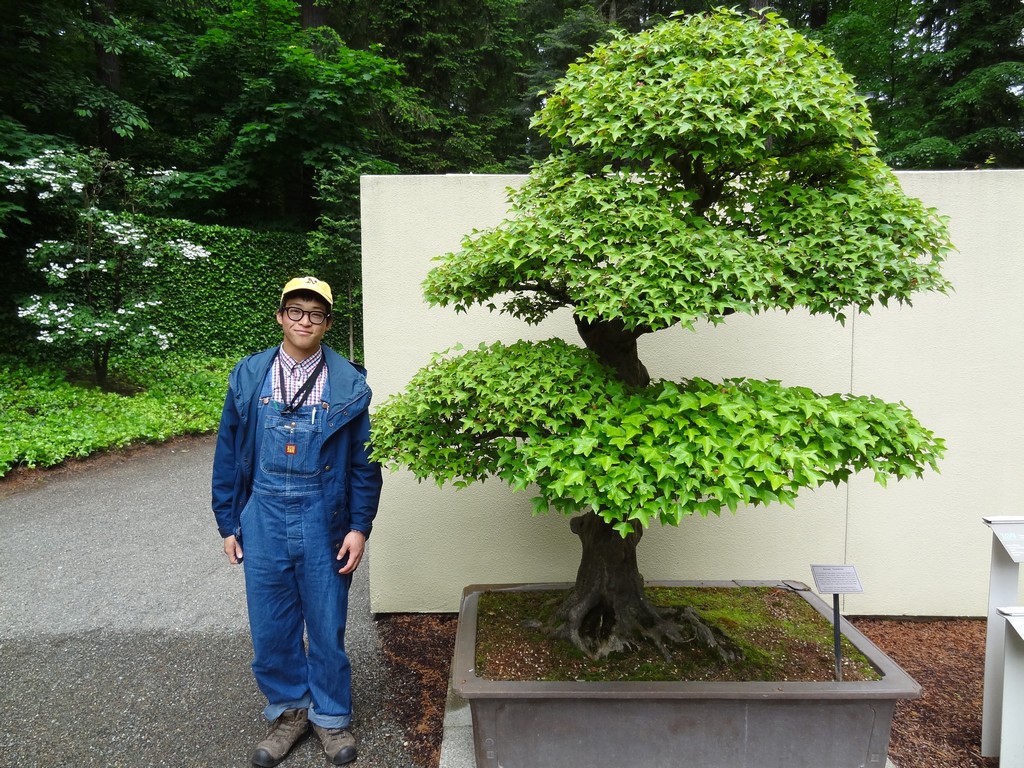 ichoudhury said:
Just wanted to share this impressive picture in this thread (Not mine of course)

I think I need a tree this big now

Pic didn't show up above for some reason 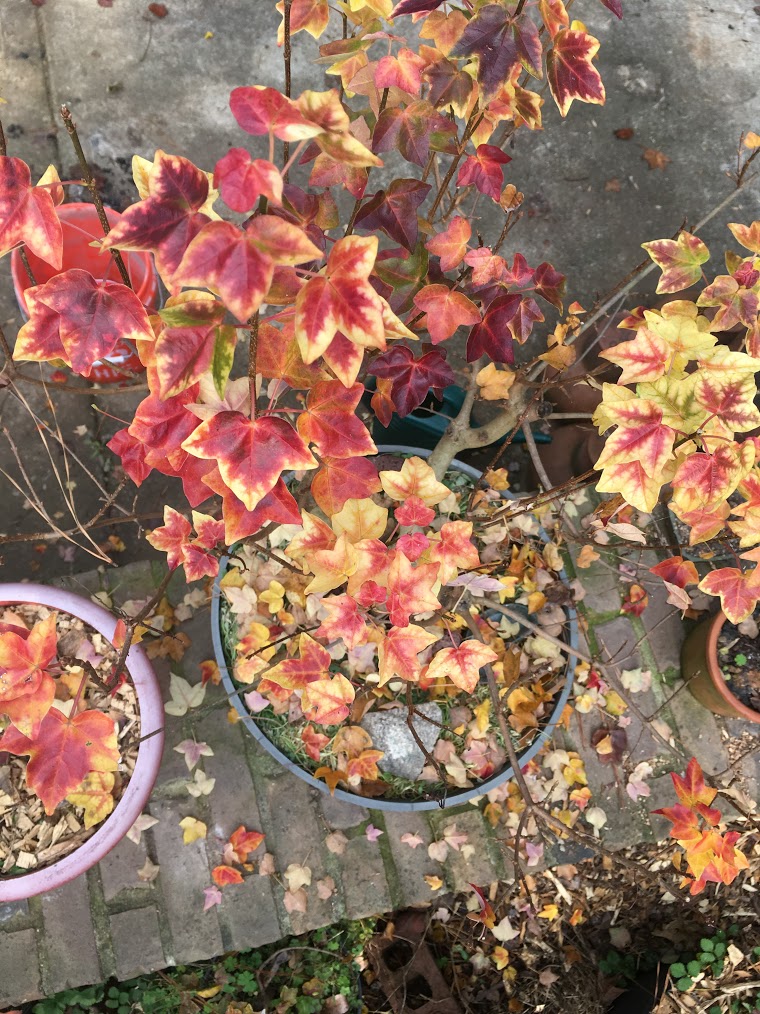 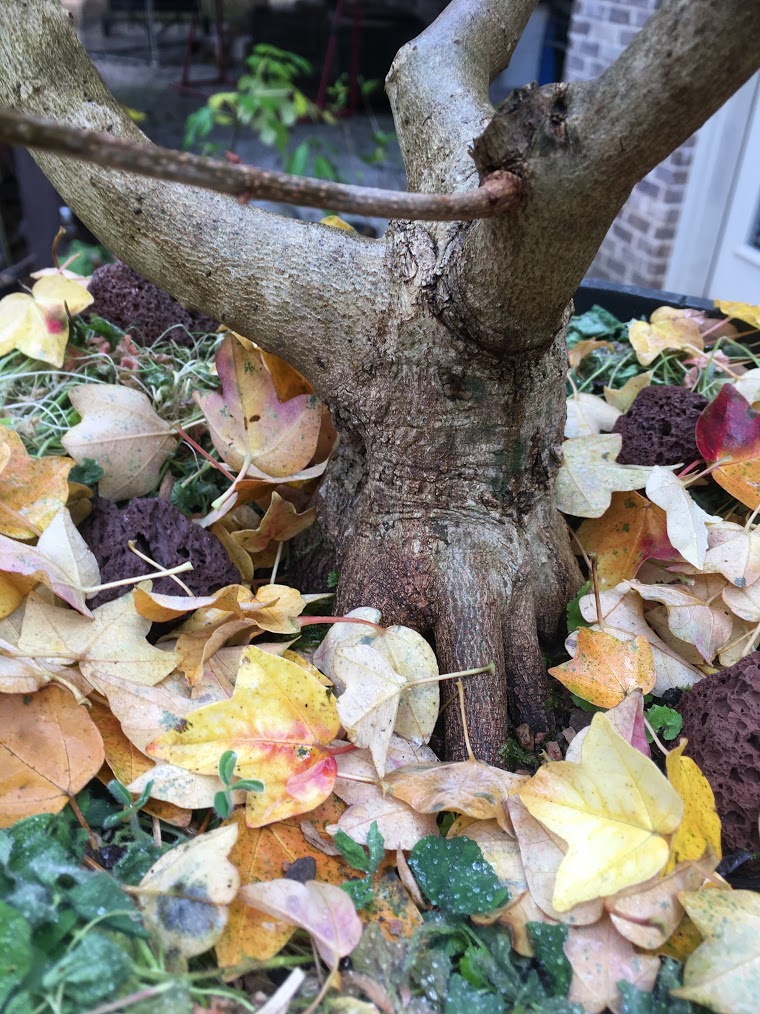 ichoudhury said:
Pic didn't show up above for some reason
Click to expand...

Nice Pics! They are beautiful trees at that! I bought 2 smaller ones for the grow out bed, but I can't wait that long!
I'm going to have to get a nice pre-bonsai in the meanwhile.
You must log in or register to reply here.

acer buergerianum had sunburn in august