Had the chance to see a lot of nice BCs, both in person and on the forums.

I ordered one from Evergreen Gardenworks back in March. Main goal here was to find one to learn from, but I like the base regardless.

Below is a picture pre-chop and next to it's new container. Since this was in May, I only did minor root reduction work. This was planted in an orchid pot and in straight up potting soil, which has remained swamp-like throughout the remainder of the growing season. 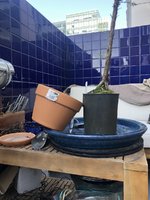 Cut the trunk back considerably in early March. Flat cut. 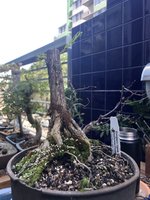 And in it's water bath: 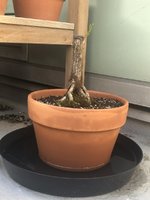 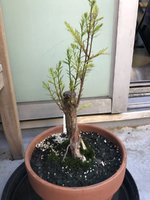 Today - pictures are roughly where I'd envision the front to be. The hollow established by the surface roots is interesting to me. Both of these pictures are after removing moss covering the base. 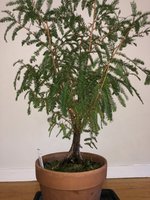 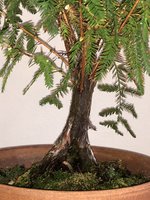 There are a couple leaders I could choose from when doing a cut back. Reading some of the progressions on the thread (MACH for instance) suggest to me I should have had a trimming session a few months back (and some bud rubbing), but was enjoying the foliage and watching the tree establish.

There is a leader at the tip of the chop site (left side of front) that would be easy... about an inch below that, one extremely strong shoot (bout 60% thicker) that's too thick to keep if it's not the leader, but would require another chop down the line. Here's two views of the chop site showing those leaders: 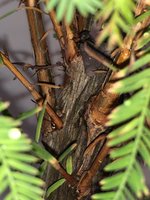 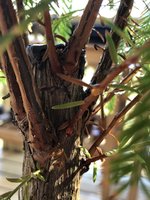 Was planning on doing a cutback and wiring session on this tree before the end of fall.

Any thoughts on leader selection?

Just like many other deciduous species, I wait until the leaves harden off and then cut back.
T

Thanks Mach. I certainly missed that window this year.
You must log in or register to reply here.