So I had a good year and I decided I wanted to get myself a xmas gift that no one in my inner circle would get me.

I love bald cypress and they seem to do very well from what I've seen on a few I am growing where I'm at so I began looking for a big tree. After looking around for a while I found a nice one here from Doug Green and Evan Pardue at https://www.underhillbonsaistore.com/

From what Evan said it was collected back in Jan. '20 so I'll check out the roots in spring and repot it then go from there. Should be a fun ride. 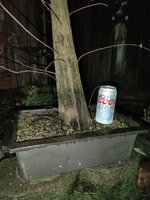 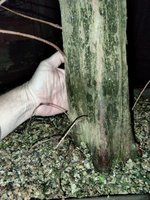 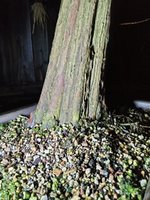 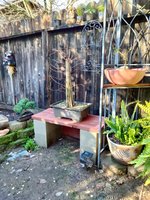 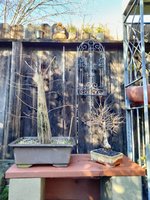 The difficulty with bald cypress is deciding what to do with the "chop". To get the buttress base you have on your tree, it was probably cut down from near 20 feet tall.

In nature, bald cypress get broken and topped. In an effort to help you plan, I took some photos from the Lower Cache River, in southern IL. In this watershed there are stands of bald cypress, mostly in discrete age groups. There is one ancient tree, 1300 years old dated by coring. Then there are around 50 trees estimated at 800 years old. (some cored, some not). Then there are several hundred trees that are roughly 400 to 500 years old, then the rest of the mixed forest is all trees less than 150 years old. The naturalist suggested that only in a few discrete years were conditions right for large numbers of seedlings to survive. So the trees in these stands tend to fall into discrete age groups, with few trees of "intermediate ages". Some combination of climate and river conditions, flooding, drought, and competition with other trees, allowed only certain age groups to become big trees.

This first photo, the tree on the right is probably near 800 years old. It had been broken off at about 15 feet tall, and 2 "back buds" have matured to to replace the top of the tree with 4 vertical trunks. That's one way to handle a chop. The tree on the left is in the 400 to 500 year age group and is a different way to handle a chop, with a single leader taking over. 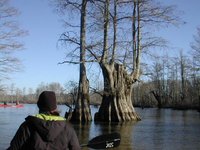 The next is the oldest bald cypress in state of Illinois. Dated by coring, to be 1300 years old, actually, the photo is 30 years old, so add a little. The tree is still standing as my nephew took friends there last year.

Look at the crown of the tree, it clearly had been broken several times over the 1300 years. Also note that NONE of the bald cypress in the background have the exaggerated FLAT TOP. The "flat top" design advocated by some is an exaggeration of what happens in a few areas, in reality most bald cypress will go from a conifer type profile to a wide low dome, not really a "flat top" tree. So ignore suggestions telling you it has to be a flat top to be a "naturalistic style" for a bald cypress. Bald cypress really don't do "flat top" everywhere. 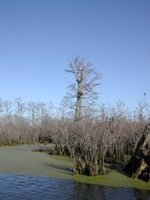 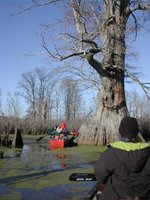 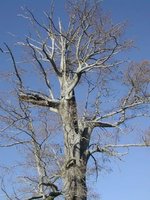 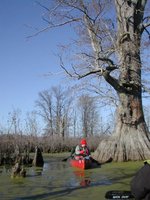 In all four photos attached the majority of the trees in the background are bald cypress, notice that there are no "flat tops".

In summer when leaves are out this area is difficult to paddle. Hot, humid, and loaded with water moccasins (cottonmouths). Winter is the only "safe" time to paddle the Lower Cache River. 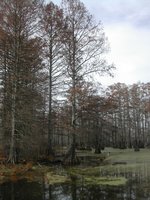 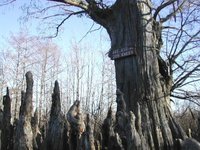 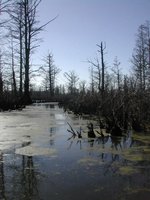 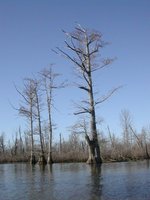 Bald cypress are extremely interesting as a species. Their forms are very much products of the local environment. THose growing in deep water areas not subject to a flood/dry cycles, the trees take on bottle shaped buttress, like the trees in Leo's Illinois pics. In shallower areas that are subject to dry spells, or a lower water table, buttress tend to look like the one on your tree--gradual taper and surface roots. Add to that, the closer you get to the Gulf of Mexico, or coastal Atlantic areas, BC get smashed regularly by hurricanes. Those storms break them repeatedly, sometimes, as the case in Blackwater River REserve in N.C. where the oldest BC on the planet live (2,625 years old) that can produce a more flattop image. Old BC in coastal areas tend to grow strongly, only to have their tops removed or slow. They then try to grow more branches lower down, or push new branching up and around the old top. That makes a flattop. Vaughn Banting's flattop at the National Bonsai and Penjing Museum in D.C. is a pretty accurate image of an old flattop BC in Southern La. 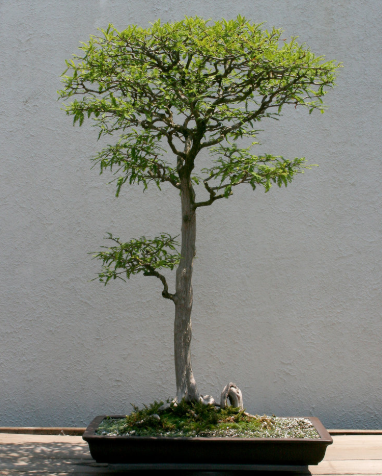 From the cliffs of San Diego to the Gulf Coast, cypress trees can be found throughout the United States. But how did this bald cypress, or Taxodium distichum, end up in a bonsai museum? The late Vaughn Banting, a former National Bonsai Foundation board member, a former director of the A

I live within a few miles of the coast and there is a surprising large amount of flat tops. Way before I ever got into bonsai I would admire these flat top cypress trees, probable my favorite tree in and around the swamps. Once I got into bonsai I like them even more.

Thanks for both those posts, Leo I've seen those before and love those pics.

Well this was some back breaking fun

I believe this tree weighs about 60 pounds with the pot and soil.


Roots looked great 2 years after being collected and had completely filled the pot. I will probably let it grow wildly this next year and start planning on addressing the chop as it already has a bunch of callus rolling over. It it's to be rotated about 10 more degrees to the right for the decided front but oh well I'll address that in a future repot. 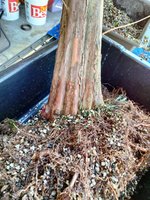 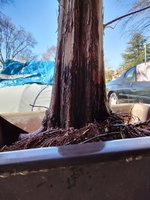 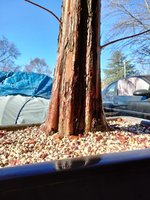 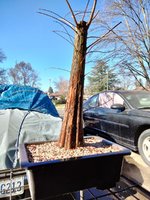