I took this bougainvillea cutting on September 5. I soaked it in distilled water for 24 hours, used rooting hormone, planted it in napa 8822, tented it with a plastic bag, and set it out in as much sun as I could give it. After six weeks there was no budding. After eight weeks there was no budding. After ten weeks, no budding. At that point I took the plastic bag off but let it sit and misted it daily. I assumed it was a failed attempt. Then, a couple of weeks ago I noticed some tiny sprouts in one location only.

Based on everything I’ve read, it should take approximately six weeks to see new growth, so twelve weeks for growth was surprising. I’m also surprised that there is only growth in one spot. Any thoughts on the above technique? Did I do something wrong or is this bougainvillea just not that vigorous? 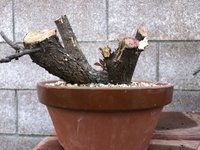 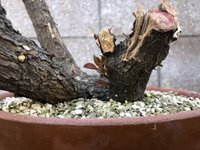 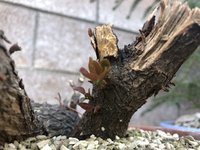 The 6 week "suggestion" to root bougies is for cuttings of small diameter, pencil thick cuttings. Once cuttings are large enough diameter to have bark, it can take quite a bit longer.

Sometimes old wood won't root at all. Give it time. See if anything sprouts on the left side.

Thanks Leo. That makes sense. The left side is 2+ inches thick. I’ll keep my fingers crossed…

I've almost thrown out a couple of bougies that sat leafless for a long time, then they just decided to grow again. Be patient. I dislike Napa 8822 for bougies, it stays too wet for too long here but might be fine in CA.

I agree, Napa 8822 does seem to stay wet too long, even in southern California. I figured for cuttings I’d rather it be a little too wet than too dry. Maybe that was a mistake. I’ll find out soon enough.
You must log in or register to reply here.