So I recently purchased a rotatory plattform, and I wanted to see if it can be useful to get advice.
I bought this bouganvillea 3 months ago for about 10$: 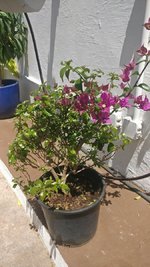 Two weeks ago, I made some choppings and repotted . I haven't styled it yet (though I want it to be not more than 30cm high). Here it is
In fact, I would like to hear your comments, advices,... also about the usefulness of this kind of presentation to show others our trees.

Also, if you need a graphic refference for your comments: 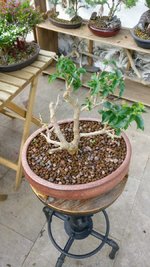 You have styled it. It's approximately an informal upright. They do not wire well, you have to wire green, but hardened twigs. They tend to break at the internodes, and wood doesn't bend at all. So if you approve of the current architecture it's clip & grow from here. They bloom on the ends of new stems. They put out one bull cane at a time which can be useful if it happens to be where you want to wire a new branch, but not useful otherwise. You need to force it to grow many canes from everywhere at the same time. You do this by clipping every new cluster at two leaves when the third begins to extend, and it responds by putting out one more someplace else. Eventually, it responds by growing new stems everywhere. That's victory! All or most of these stems will bloom on short stems (rather than the long bull stems). The closest you're going to get to ~clouds~ will be bunches or clusters of blooms here and there and you making open space in-between. The initial bull cane clusters that you shortened to two leaves won't do anything in particular, so they are good prospects to now just trim off so you can have some bare wood/empty space for the birdies to fly thru.

I was thinking on chopping one or some of the branches to improve the design. Unsure yet wich ones, if any....

It's a little unbalanced/heavy on the right, but as it grows and you favor growth on the left, it will become whatever you make it.
You must log in or register to reply here.