This is part of the Stop Spraying campaign.

Finally got around to finishing this video which I recommend for Truth.

Key is this range of health that certain pests are active at. 12 is generally considered a healthy plant. 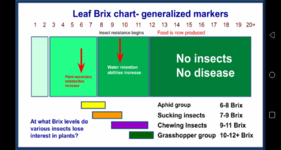 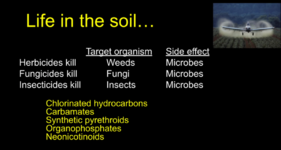 I hope this keeps $ in your pocket and microbes in your soil.

He who has grasshoppers wins!

I watched some parts, the guy answered the question: Why do my plants have insect damage and high brix?
With:
They don't always have high brix due to whatever, so the damage was from before.

That's not good enough for me. Insects shouldn't thrive if their food source is lethal, that's less than basic biology.

If this brix theory would be true, insects would insanely increase their numbers in fall and spring when brix levels are low. But instead, we see their numbers rise - especially in aphids that reproduce by the hour - in summer when the brix are at their highest.
If plants and insects have co-evolved over millions of years, the insects win because their generation time is a quarter of that of a plant. They can evolve four times faster.

Plants can take up sugars from their roots. Easily. Aphids raining down honeydew would sweeten the soil with sugars, would also feed the plant, so both microbes and plants would thrive and aphids should die. Everyone who has ever parked under a maple tree during summer (again, peak Brix season!) would know that sugary stickiness.. If the aphids would kill or paralyze themselves, this issue wouldn't persist for months. If the thriving microbes would be able to kill the aphids or increase defences, the issue shouldn't persist for months.

I'm all in favor of microbes and fewer biocides.
But this scientist finds very few peers with similar thoughts for the sole reason that there's something fishy about the high brix = less feeding theory.
Don't get me wrong here, I'm not trying to know it better than the entomologist explaining plant biology.. But as someone who studied plant biology, I'm somewhat sceptical about the insect guy explaining how plants work.

The citrus branch example is one of those things I can give three other explanations for: a branch is attacked, it weakens and more insects are attracted to it while the rest of the plant is unharmed. The guy says it has to do with low sugar content; the branch was weak.

I say consider jasmonatic and turpene signalling that citrus plants are good at, the branch gets infected and it does two things: it signals nearby branches to ramp up defenses and this same signal is picked up by those insects and they ignore all other branches because there's the smell of a buffet and sexy partners on the infected one.
Also consider plants knowing how to compartmentalize their parts to stop microbial infections from spreading, the branch was weak but destined to drop anyways. It could be weak because it was infected, or could be infected because it's weak, could be weak because a lack of sunlight or other reasons. Better to use it as a lure and keep insects away from the rest, than to just drain and drop it. The old lizard-tail decoy. The brix are part of the story, but not the whole book.

We can put this whole thing to the test: raise brix levels by fertilizing with high fructose high glucose corn syrup. Pests should be gone in a day or two. If not, the theory isn't water tight.


Again, there is no wrong or right in the plant world. Many roads to Rome and I'd love to discuss them. But I think we're dealing with incomplete information and basing theories on paper stilts isn't a solid foundation.
You must log in or register to reply here.