Can I save a yellow Taxus Baccata?

So today in a spur of the moment I purchased an English Yew from a garden centre that was 80% off, it's huge and something about it made me fall in love so without really thinking about it I purchased it and ran home. Now the tree is about 5 - 6ft but it's a yellowy colour all over. I know this is usually a water issue, either too much or too little, and online opinions seem to vary. So I have some questions for those of you who are more experienced:

1. Can I repot it into some proper well draining soil now or do I need to wait until spring?

2. Do you think I could save it or is it game over once it goes yellow?

3. Can I cut it down to a stump and hope it grows back?

I will get some decent pictures tomorrow, I also purchased 2 smaller yews because I thought they looked awesome too and they have the same issue.

How do you know its English and not a Welsh yew.. ah because its gone yellow

Slip it if you think its so root bound that it inst taking water, but is that the case? Wait till spring id say.

Victorim said:
How do you know its English and not a Welsh yew.. ah because its gone yellow

Slip it if you think its so root bound that it inst taking water, but is that the case? Wait till spring id say.
Click to expand...

Ha!
Hilarious!
And I agree

It's getting a bit late in the season, but a foliar fertilizer application might help it green up before winter. I purchased a yew in August that was looking yellow. The tree was slip potted and drenched with Miracid and chelated iron. I'm not sure whether it was the bigger pot or the fertilizer, but I noticed a huge difference in only a couple weeks.

In the spur of the moment I once ate yellow snow!

Hey guys, thanks for the replies. Here are the pictures as promised:

As you can see 2 of the 3 looks a bit rough, the large one especially. What would you advise are far as pruning goes? Or is it better to just leave that for now too?

I hate to bring you bad news, but this tree is dead. Did you leave it in a locked car, parked in the sun? High heat (above 45 C) can kill a tree. If it looked this bad when you saw it, why would you buy a dead or dying tree? I doubt it will survive.

I would take it back to where you purchased it for a refund.

Unhealthy trees, no matter how cheap rarely work out. Even if you save it, this tree will need at least three years to a decade or more to recover and back bud where it would be useful. Hopefully what ever it has doesn't spread to the rest of your collection.

The big one was £10 and the little ones were £3. I figured they were worth a shot at reviving, even if I can save just one it'll be worth it. If they all die I can have fun carving them up using them as deadwood for something else

I'm like you, never leave a soldier behind! Like said before, yes it's unhealthy, yes it will be a few years before it will be anything worth showing to friends, but there's always hope!

Good news? Summer is over and hopefully it is using the rest of the season to prepare for winter. It will some extra protection and care over the winter.

I see you're in UK, so you don't have to worry about Sub-Zero temps hurting your shrub further.

Fertilizer heavy in the spring and treat with pesticides for best chances of recovery! ( Assuming it makes it)

I don't know Leo, I'm not seeing dead here. I don't know this type as well as my local Yew, brevifolia, but other than foliage Yew are pretty much Yew. I live in a forest heavily populated with the species and yellowing is quite common. They are certainly different than most other conifers in that they will regenerate growth if cut below the lowest live limbs. They are an understory tree and not a preferred logging species. Except for clear-cut, most loggers will work around them. I have seen lots of yellow Yew when first exposed to the full sun and thought ' Ah yeah, she's a goner '. A few seasons of transition and they adapt and come back. Just saying what I see going on around me, not saying that translates directly to container culture, but I would not head for the waste bin with them just yet. I would slip them into something chunky and quick draining.

This looks a bit like irish yew, upward habit and not the most ideal yew for bonsai..you want taxus bacatta, english yew
i bought a yew for a tenner as well, a few days ago........they can get a light green colour when kept in full sun and a darker green in shade

this is how a reasonably healthy yew, which was kept in full sun should look 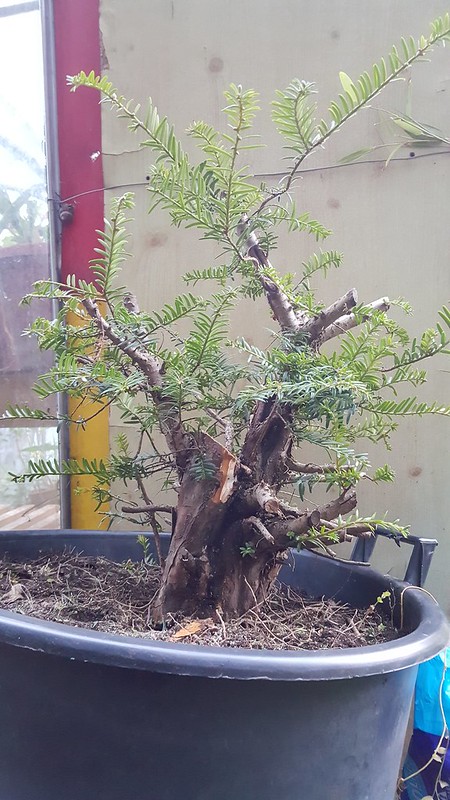 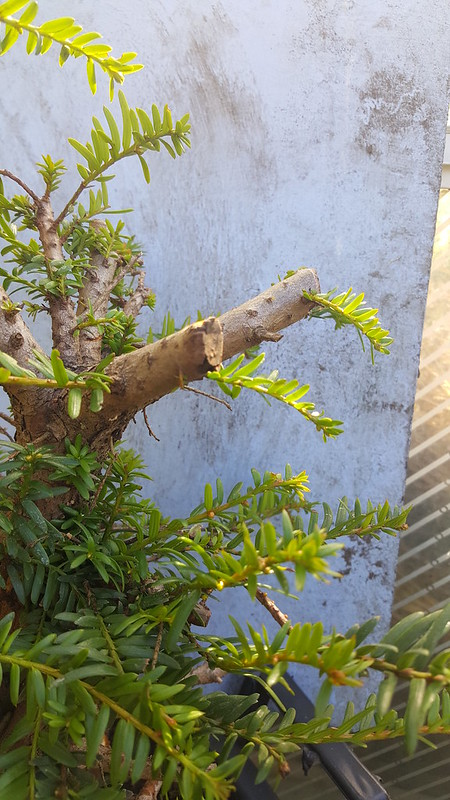 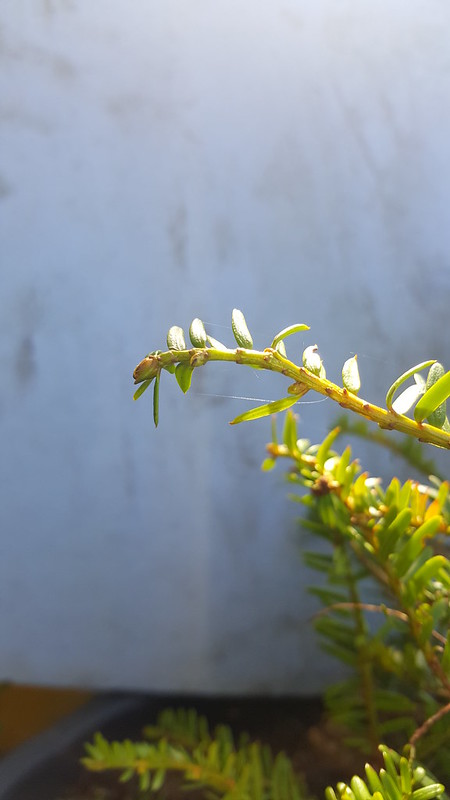 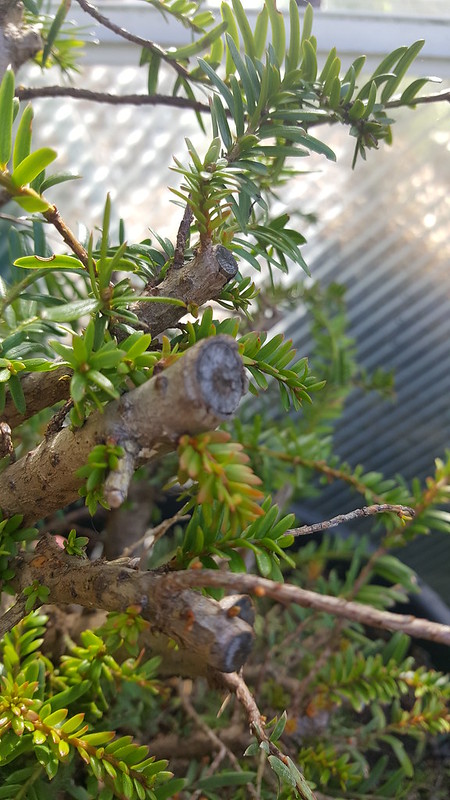 im seeing a lot of brown on yours, it looks to be struggling but not ready to keel over just yet, could be a few things, sometimes these bargain bucket trees tend not to get watered much, could be vine weevil........................... first thing i do with these garden centre/nursery trees is drench the pot with https://www.amazon.co.uk/Provado-50...1507054796&sr=8-5&keywords=vine+weevil+killer this is essential

i also water with sea weed and rhizotonic solution...i would wait until spring before didturbing the roots then pot into a free draining, open mix, kaizen bonsai have good soil mixes or straights
C

Slip pot the tree, Yew are tough and it certainly doesnt look dead yet.. When slip potting take a look at the roots do they smell bad? If yes its root rot so strip of 20% of the soil and replace with very free draining mix. It is very probably root bound so a bigger pot will certainly help then protect it over winter. You are in Bristol a great Bonsai club with The Mr Dan Barton a member join and let him take a look

Thanks for the replies guys! It was definitely listed as a Taxus Baccata on the label but it wouldn't be the first time I've purchased something that turned out to be something else. It does look quite similar to yours, I'm not sure on the exact differences between the species though.

I've looked into the Bristol Bonsai Club and will hopefully be attending their next meeting.

It's looking greener now and there is some new growth so it's definitely not dead. I think one of the 2 little ones may be though but that's no real loss. I'll post some updated pictures tomorrow!
C

Enjoy the Bonsai club and give my very best regards to Dan the Man Barton please
You must log in or register to reply here.

F
Too late to save redbud?

Wilting bald cypress ... able to save it?

S
Way to save or propagate a ficus ginseng bonsai after serious root rot?