Chopping Back my Azalea

I recently picked up 2 azalea hybrids from a garden center and one of them has become my experiment tree. I've already cut it back super hard after hearing that it shouldn't be an issue this time of year.

When cutting back this species, should I have left more branches or fewer? I didn't want to turn it into just a stick but perhaps that's not a valid concern. What would you have done?

Also for styling, and it's probably a bit early to decide, but what trunk line would you keep? I'll draw my thoughts on the pictures below. 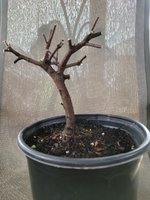 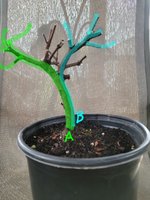 My default idea is just leave everything on it and go broom style of sorts. I really like the idea of trunk line A because of the nice movement off to one side. B is also an option in my mind but I don't like it as much. 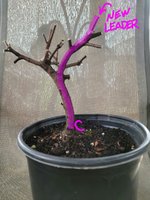 My vote is for C

Yea I forgot to comment on C because I came up with that idea after I posted this, and went back to edit. I think C has good taper potential.

So if I go for the C trunk line, when do you think I should make the chop? I mean it's already chopped now so I could just finish the job today I'd imagine. Also my brain is telling me to get rid of all branches except the ones very close to the proposed new leader. Does that sound about right? I don't know how well it'll back bud but I don't really see any first branches worth keeping. The A trunk line would have been perfect as a first branch if it wasn't so thick

It is later than I like to make major chops, but at this point I say finish the job.

The sooner the better. The azalea is very likely to respond in a couple three weeks.

Cutting off all the green on the tip areas of what was left likely slowed the response by a bit, but that’s over and done with now. A thought..be cautious with your horticultural care from here on out. Keep it moist, not wet, avoid fertilizer. What’s in the media… which looks like peat nursery mix… will do fine in providing nutrients for now.

On a more global thought…. For me, I disagree that making severe cutbacks this time of the year are no issue. Others will disagree. Being more cautious, I likely would of made an interim cutback and waited until spring to severely chop as the overall response and progress in growth would have likely been faster then, without the worries of wintering over before the tree was stabilized…. (Unless you plan grow it out all winter.).

Doing a more moderate cutback this time of year, leaving terminal growth areas gives a better long term response and more time to study the options. See examples below….. smaller azaleas, a Plum Purty done yesterday, a Bunka two weeks ago. This is their second cutback, which has finally crafted each into a rough primary structural design. Both are in different situations and each is established in their media and setting…. the first will winter over in a separate cold frame, the second will have a cold frame erected around the entire bed this fall again, but the principle is similar. 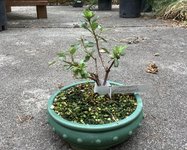 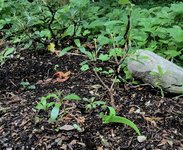 That said, one can still stand to learn a real lot about azalea response to pruning in your particular area and wintering over care. If this is your first year wintering over azaleas in your area it might be wise now to be concerned about winter survival. You can tip the odds in your favor by learning about ways to winter and make an effective plan before fall freezes force your hand and supplies are in high demand. There are a number of good threads on site about wintering over.

Good luck and I look forward to hearing about your progress!
DSD sends

It also matters what size of bonsai you want to achieve. I’d think waiting several more years to cut the large branch on the left in C would give you a larger trunk to work with in the future. While you continue to develop the side you are going to keep. Just my thoughts since the trunk is already pretty long.

The tree will back bud lower much more on the lower trunk then up high, another reason to keep sap running up the branches. That’s due to azaleas being basally dominant as it’s a bush vs a tree.

One method to thicken the lower trunk is to allow a couple 2-3 buds grow into lower branches, placed at different heights, in between the first branch and the soil.

Each branch will contribute to thickening the trunk from where it meets the trunk downward to the soil. So strategically placed sacrifice branches there will help the most to create a taper on the trunk.

This is standard practice when growing out those tall Satsuki whips once they’ve been wired and placed in the ground.

These whips are pencil thin, see photo example below of some whips in the yard before wire is applied, and need taper, thus branches are finally allowed to grow down low to develop taper over 5 years of ground growing. 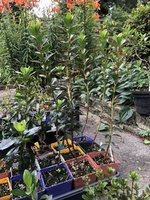 An interesting trick is to keep these lower branches on the outside parts of a curve… due to the curves naturally building faster on the concave side… this natural process has the effect of “straightening the bends.

So enhancing caliper on the convex side with branches will help counteract this process a bit… not totally, but it will help somewhat.

Deep Sea Diver said:
These whips are pencil thin, see photo example below of some whips in the yard before wire is applied, and need taper, thus branches are finally allowed to grow down low to develop taper over 5 years of ground growing.
Click to expand...

So in 5 years your whips will look like this... 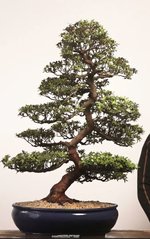 I am receiving today my first azalea... after saying that I will never had a flowering brush/tree. go figure.

One would only hope that will happen

!
I’ve some other ideas of styling for some of these into a grouping which will depend on the second wave of cuttings I struck gaining some height in the next months.
cheers
DSD sends
You must log in or register to reply here.