I think they are in China

I have to admit... these trees do nothing for me. They are the giant version of mass-produced mallsai.

I think they look grotesque.

I think they are fascinating, grotesquely beautiful.
You don't want to view them with your bonsai eyes.
View them with your Salvador Dali or M C Escher eyes. Maybe even Hieronymus Bosch eyes.
Or view them as otherworldly, an alien landscape or fairyland.
I love what some people do with plants that requires a great deal of skill or imagination, or both.
Here is one on my favorites, a living chair. 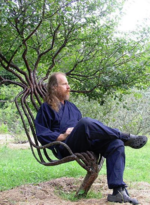 Topiary comes to mind. Of course, a bit of judicious pruning and letting the foliage grow out could work wonders.

I've been meaning to grow a few staghorn sumac because, for whatever reason, they remind me of truffula trees

Are you guys ficus haters over here. Man this video is full of hundreds of different styles. Some very commercial, some 20’ tall take a huge latter to trim that I’m sure is not easy. Where’s the props??? Not here I guess!

If those are mallsai then I want to go to that mall! They may be intended for individual purchase, but I like the effect of them in rows, too.
F

I can appreciate the work put into these trees.
Would I want one no thanks.

If I lived in a tropical area I would probably already have one.

Mind blown! I was aware of the mass production of ficus, but damn!
For me, these are very impressive. I’ve never cared for the braided styles, but it’s still amazing.
+These things are huge!
What do you think the price ranges are for the large
Rows apron rows of these beasts!

Do you think they would like living in Minnesota?

Carol 83 said:
Does anyone?

C’mon Carol, -5 right now with a dazzling fresh layer of snow.
What’s not to like?

Eckhoffw said:
C’mon Carol, -5 right now with a dazzling fresh layer of snow.
What’s not to like?

Just teasing, it's a beautiful state. My dad and a few buddies used to go fishing in Brainard every year.

Carol 83 said:
Just teasing, it's a beautiful state. My dad and a few buddies used to go fishing in Brainard every year.
Click to expand...

Haha! Yeah I know you are.

but This time of year I think many Minnesotans wonder why we stay here. The Ying Yang of it I guess.
I used to go on a yearly fishing retreat in Brainard myself. Nice.
L

I’ve seen another video like this but of rows and rows of Podocarpus niwaki being grown and trained in Japan. I think it was on the daishu.jp YouTube channel.

Personally, I would love to have one of these ficus or one of those podocarpus if I lived in right climate for it and was rolling in the kind of dough you need to be able to afford one of those trees. Just because they’re mass produced and rather cartoonish when you see them all together in rows like that doesn’t mean one or two wouldn’t make a home garden look absolutely stunning. Their similarities are accentuated when you see them in fields like that, but they are nonetheless individuals with enough differences from one tree to the next to be visually interesting in small numbers. I think if you saw one or two in someone’s garden, you wouldn’t really have the same impression of cookie cutter design that you get when you see hundreds of them together.

At home, I have a small replica Venus de Milo sculpture cast in a resin & marble dust aggregate. Aesthetically, does it really matter that it’s not a legit ancient Greek sculpture and cast from composite material, not a carving in stone at all? Does it matter that it’s a copy of a famous sculpture and it’s well known to anyone who’s ever watched a documentary on ancient Greece on PBS or the Discovery Channel that mine is a fake, the original is much larger (and in the Louvre), and mine is not even a complete copy of the whole sculpture (it’s just a bust going from waist to neck, while the original sculpture is of a whole person from head to toe)? Does it matter that it was fairly inexpensive and somebody else can certainly afford to have one too if they so desire? Nope, nope, and nope. It still looks rad in my home and I still get enjoyment from being around art that I like. It might be kind of boring if everyone had the same sculpture, but that’s not going to happen because we’re different people and we like different stuff. I can have my Venus replica and you can have your framed print of a Monet water lily painting or whatever it is that floats your boat and it’s all good.
Last edited: Feb 13, 2022

Pretty incredible for the size and magnitude of these things.

It IS a dr Seuss wet dream