Has anybody had any luck cultivating a bonsai out of them, I know they back bud all over the place and can be coppiced. But the weird foliage.....?

if you've punched the name into the search bar on google and on here and hardly if anything comes up, then its probably a sign it isnt a good bonsai subject.

Hi there! i ran into a cryptomeria japonica "cristata" and am curious if this cultivar is suitable for bonsai because off the big clumps of foliage it create's anyone knows about this ?

hope that helps, maybe you can have 'fun' with it though

I don't have that particular variety but mine is very flexible. So much that wiring must be done more than once on young shoots. Rather unpredictable as to where the thick shoots will pop vrs the majority thin branches. I'm still learning how to deal with it and have no great advice to offer.
In fact I was watching this tread to see others views and advice.

Graft said:
Has anybody had any luck cultivating a bonsai out of them
Click to expand...

I'll let you be the judge on that. I've had it only 2 years and may put it back into a pond basket as I was too eager to have it in a pot. Seems to have really slowed it down. Bigger pot or pond basket next year as I need to bulk up the spindly lower branches.

It has been very tolerant of our cold winters with only minimal protection. Mulched under the bench. They do discolor in the winter so don't be as alarmed as I was the first year. Survived single digit temps(F) last year while I was away for a month at a time. 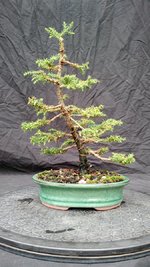 Here is a winter pic of foliage which surprisingly greened right up when spring arrived. 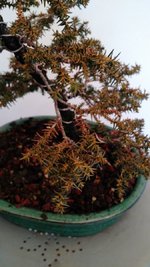 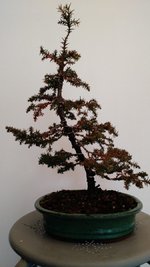 Thanks for the replies guys. I bought one from a nursery earlier this year. It is planted out in the garden. It already has a fairly thick trunk. From what I have read it is one of the few conifers that you can coppice down to ground level. I think I will air plant it next spring and take it from there. Could be an interesting experiment. I might even win the Cryptomeria Cristata bonsai of the year award...as the only entrant!!
You must log in or register to reply here.