Mix a little bit of stir crazy from working from home so much and a little bit of aggravation over fall allergy season setting in and I make some stupid decisions! I had gone out to wander the local nurseries and and play a little hooky from work this morning. I had been thinking about what to do with an overabundance of cork oak I'll need to over winter for a while now and I bumped into a nice large rectangular pot at a price worth playing around with. So I bought it!

I had asked some questions out in this thread

I prefer to grow from seed when I can: it's about the journey, not the destination :) As a result, I now have about 15 quercus suber and 10ish virginiana that I "don't need". Options I'm considering for their future include trying to sell/trade them. Or maybe to make a couple forest plantings...

about live oak forest plantings. One of the suggestions from Leo was a more open "savannah" style planting...which I liked the idea of quite a bit. I currently have several 3 gallon grow bags with 3-4 cork oak each that are from acorn germinated in October 2018. I poked around what I had and choose this lucky bag of volunteers!

I agonized a bit as this may be a death sentence for these volunteers and I really like the double trunk one in the center back. It is a fused double trunk below the surface...I really should have taken a picture, but I didn't In the end, I was confident enough they'd survive that I risked it!

All this batch of oak had their tap root trimmed to ~5" fall of 2019. They've been planted in Napa plus chunky coconut coif and/or fir bark since they were acorns. Here's an example of the roots. Some fibrous mats on the longer roots were unintentionally separated as I detangled trees. I trimmed another 1" off the tap root so I was going to loose many of those pads anyway. Here's an example of what was left after trimming.

I don't know if it's a good practice or not with trees, but one thing I learned from orchids is to always repot them with wet roots. Wet roots are generally more pliable and less likely to snap. Last night we had several inches of rain and the bag was still pretty wet. After depotting individual trees, I put them in a bucket full of water until they were ready to go into the planting. Tell me I'm wrong, but I've done this practice for many many years and never noticed a problem. I also always "water in" heavily after repotting.

I kept all the potting soil the trees came out of and dumped in into a bucket of left over orchid mix I had mixed up and didn't use. Basically chunky coconut coif, hydroponic clay balls and a little bit of sphagnum moss. I like Napa 8822 because it's cheap and readily available here and lasts a good long time and can be reused. What I don't like about it is that when a plant is first potted into it, there's not a lot of structure to the mix. I find adding coconut coif or fir bark helps provide some structure to "seat" the tree in little better. Probably wouldn't be a problem if I wired my trees in Anyway, the trees basically went right back into the same soil they came out of...plus a bit of leftover orchid mix!

The pot I bought is a nondescript, unstamped manufacturer. It has decent drainage holes, but no holes for tie-downs. Before I even picked out the trees, I was worried enough about stability that I had asked out in this thread

Can someone explain pottery to me?

This is my library! @Anthony these books are so good, my narrowed focus would only recommend them.😉 Sorce

about whether it was OK to drill holes or better to epoxy wire loops or what. Sorce mentioned some non-wire tricks like wedging chopsticks. In the end, I hate wire enough and this pot was plenty deep enough that I went without wiring the trees in. We'll see how long it is before I regret that decision! I generally go with the "heavy rock" or "lean on neighbor" methods of tree securement. Occasionally I'll mix it up with the "twist tie to bamboo stake" method. This pot was deep enough that I think the "heavy rock" method for a few months should suffice

The trees were pretty shaggy for such small things. Since I trimmed roughly 30% of the roots, I went ahead and trimmed the trees back quite a bit as well. I didn't make any attempt at "styling" in any real way. All I did was take off roughly half the foliage to bring the branches in some and trigger some back budding. I trimmed a similar tree back in a similar way about a week or so ago and it's already budding out. I'm hoping these guys weren't so insulted by the root disturbance that they will bud out similarly. I should have at least a month of nights above 60F and days above 70F. I do expect one more flush from most of my live oaks this season. If I need to, I can extend the season a bit by bringing the planting into a bright room for another month or so before chilling it for the winter.

Here is a front and top view after the trim.

I really wanted to get the back left tree (3rd trunk from the left) up on a hill to raise it off the level to add some more dimension. I'd also really like to raise the twin trunk on the left enough to display the fused trunk. The trunk on the far right is pretty dull too. For now, I'm just going to leave it and see what happens. I'm hoping it will survive the winter and I can let it grow wild next season.

My wife and I walk the local trails most date nights. I might start bringing a bag with me to collect moss. I sometimes top dress my trees with 1/4-1/2" of worm casings or manure. If I decide to do that here, I might take the time to brush off the coconut coif on the surface first, top dress with a thin layer of casings/manure and plant some moss. It's much more likely I'll take the lazy route and do nothing until I know for sure it's going to live however...

This planting has filled in rather nicely! 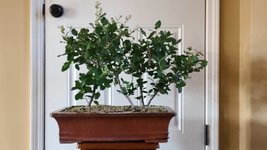 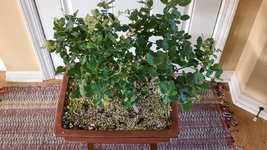 The trees all seem to have settled in and are all doing well. There's a new flush of growth going on now. 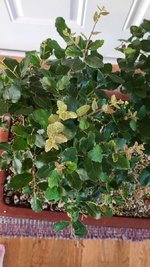 The trees need some trimming for better definition...maybe I can start to get some ramification going...

I'll leave them to get through the heat of summer...but I've started thinking about landscaping options. I'd still like to push one of the trunks higher up onto a gentle hill...maybe add a path and a bench. Definitely need some ground cover too...

The local mom-n-pop (just mom, actually...no pop) nursery is a distributor for a semi-local grower. That grower grows ALL the herbs! I currently have 15 different flavors of mint growing in little pots on my deck because...why not The bumble bees are very appreciative!

Several of the thyme varieties they sell are "creeping" and won't get more than 1-2 inches tall. Others are various types of variegated: yellow, silver, etc...

Today was the first day it's been cool enough to work in the garage for a long time so I went ahead and built a quick little bench!

Since I had understory shrubs and a bench...it was time to add in a path for the bench to sit along. 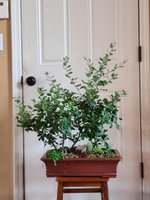 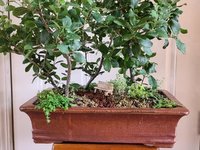 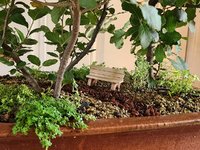 It's still got a ways to go...but it's starting to look like a pleasant place to sit for a spell

The trees are looking shaggy but I didn't do anything with them. We're not likely out of the heat yet this year though it does look like we have a nice reprieve for the next 4-5 days. Some of the new growth has burnt at the ends and the newest growth is still a bit tender and wilts a bit in the mid-day heat. I'll probably just leave the trees do their thing until I bring the planting back inside for the winter. There has been some noticeable trunk thickening...maybe they'll thicken a bit more over the next month or two before the temps start to plummet. Once I bring it back in for the winter, I'll give it a hair cut. By then the ground cover should have filled in more and will also likely need some upkeep.
You must log in or register to reply here.