I was really hoping to work in the yard today, but it's raining so I decided to kill a few ficus instead!

I've had this rock...petrified wood...for a while and always wanted to plant a tree on it. 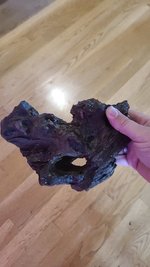 The problem is it is petrified wood is quartz and non-porous...roots don't adhere to it I had a few "extra" nerifoli left from other projects. They can get big puffy roots. There's also a notch where I envision a tree that the base of a ficus might be able to swell into to wedge itself in place. If the roots won't adhere, maybe I can get them to swell enough to appear to adhere??

This is the orientation I envision for the rock. The notch in the middle is where I want the tree to sit. 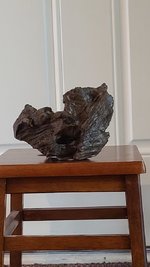 Two-left-thumb disease deleted by "before" pics on me But, here's the tree after some butchering to fit it into that notch. 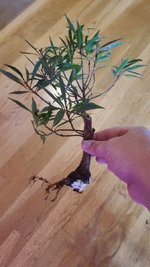 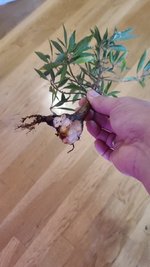 I almost didn't bother trying to keep those roots. They fit nicely into a channel I would like roots to fill and provided a good indexing mark to help me remember the orientation I wanted as I nibbled away to get the base to fit in that notch. 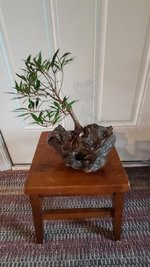 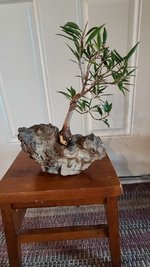 The hard part was trying to hold damp moss in place while trying to wrap it all up! Could have used an extra set of hands for that part! But I managed. 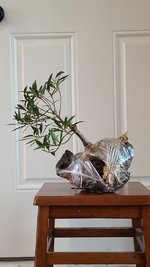 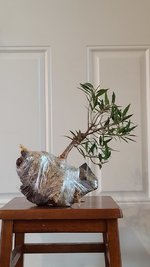 For now, I didn't even bother putting it in a pot. I just set the rock out on my deck exactly like that. There are places the sphagnum sticks out of the plastic where I can water every couple of days. Depending on how the top reacts, I'm thinking I'll open it late July/early august and see if any adjustments are needed. If things are progressing well at that time, I'll switch to wrapping in landscaping cloth and put it in a pot.

It lost most of its leaves...as expected given I cut almost all its roots off! But, it's pushing new growth now 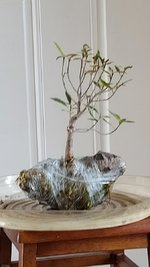 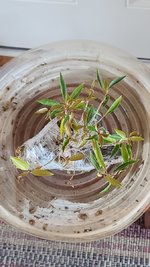 Now that summer is heating up, I'll give it another month, but then I'll probably cut it open and see what's going on. Maybe by then there will be some longer roots and it will be worth rewrapping so that the roots can escape out the bottom into a pot.

Good sign. Be careful with it. You don't want to set it back again

Paradox said:
Good sign. Be careful with it. You don't want to set it back again
Click to expand...

Honestly, I really doubt this planting is going to work. Petrified wood is basically glass (quartz). The roots will never adhere. My only hope is the roots get close enough and rigid enough to appear to adhere.

I do think with time the trunk base will swell enough to fill the cavity it is in and then be trapped. The cavity wraps over enough that if the trunk base swells enough, it cannot pop out. The only hope for roots along the rock itself is they get fleshy enough they are no longer flexible. There are no places for the roots to "grab"

The only reason I tried is I had a few extra baby willow leafs that I either needed to do something outlandish with or toss on the scrap heap I need to downsize my collection this year by quite a bit I've given away all the ones I could. I won't ship them. So, the only hope for some of these spares is I try some high risk/reward type experiments. If they work, I have an tree interesting enough to justify keeping. If not, at least they had an interesting (to me anyway!) journey on their way to the compost bin

I think the roots will adhere well. The surface of the rock/petrified wood is quite rough with lots of texture. If you wrap the roots tight enough and let them escape into soil below the rock, they will grip as they grow. I have a schefflera on a piece of basalt that is much smoother than your stone.

Michael P said:
I think the roots will adhere well. The surface of the rock/petrified wood is quite rough with lots of texture. If you wrap the roots tight enough and let them escape into soil below the rock, they will grip as they grow. I have a schefflera on a piece of basalt that is much smoother than your stone.
Click to expand...

Thanks for the vote of confidence I have my doubts though

The surface is "rough" but not porous. Basalts are often porous. Root hairs can grab tiny imperfections. Porous rock can absorb water giving the roots a reason to poke every crack and pore. Think velcro. The rock is the cloth, the root the hooks.

Petrified materials are non-porous. They may be "rough" at large scale, but at micro scale, there are slippery. They don't absorb moisture. Velcro hooks don't grip glass As the roots thicken, they can/will compress against the surface, but there needs to be something to compress against...think pincher grip. Roots trapped in those crevices will just push themselves out unless there is something to oppose them. The only opposing forces are roots on the other side or places the rock "closes over" itself. Opposing roots don't provide much pressure unless ther were already lignified into place. There aren't many places on the rock that are closed in enough to compress roots.

Roots of some plants do excrete a sort of glue...but that works on the same principle: works better on porous materials than non-porous.

But, this is an experiment...so let's prove me wrong If nothing else, the base of the trunk is in a closed in cavity that it should be able to wedge itself in...the rock has a pincher grip on the trunk. If that junction holds...it shouldn't matter much if the rest of the roots truly adhere or not...

How did this turn out?

It's still hanging in there 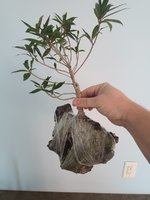 The base feels like it's locking in pretty tight. It feels ridgid and I can safely pick up the planting by the trunk now anyway.

I haven't opened it since the initial wrap and it has sat on my deck all summer exactly like this: no secondary pot for the roots to extend into. 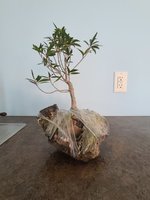 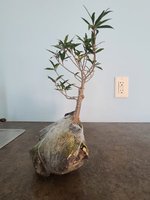 I'm moving a zone colder...and losing my nice bright south-eastern facing "wall of windows" that my tropicals winter in at the end of the month. I'm a little worried about my "light space" over the next few months until it's warm enough to move everyone outside. I'll do what I can to get a temporary light setup as soon as I complete the move. But, I will be losing a ton of readily available photons. I've already downsized most of the duplicates in my outdoor collection. I'm still working through reducing many of my tropicals. I intend to keep this one...but only because I think it can suffer along in the lesser-than-ideal space I have at the moment until it is warm enough to go back outside full time. I have plans for a decent grow-space indoors for next winter...but I need some time to build out some decent stands first.
You must log in or register to reply here.