Having read & seen lot of air-layering examples online in late 2015, I was wondering if double air layering on same trunk was possible, out of curiosity. Though some said it is possible, I could not find any pics / videos of it online. That was the motivation to try this & post online. I had only one collected specimen (middle one) of this species & I loved the light colored trunk of this tree.

Since there were lot of sacrifice branches within 6 months from the time of collecting, I decided to try my first ever air layer on this. If it worked out fine, then the plan was to proceed to the 2nd air layer on the same trunk. Luckily it had a happy ending. This story is more about the thrill of doing & learning something new than choosing a good specimen to air layer. I had to begin somewhere

This is how the plant looked in Dec 2015. Cutting the container into 2 halves makes it easier to remove later, after rooting. Holes melted in with a soldering gun.

Peeled the trunk, attached the container & filled with cocpeat. I don't believe in making it air-tight. Air is very much needed for the rooting process and to prevent mold growth, in my climate. I learn't about using colanders much later only & that is the best container in my opinion, for air layering, not plastic wrap. The latter is fine if the parent tree is not in your possession.

Multiple airlayers definitely do work, the only requirement is that you have supporting foliage in-between each layer. Good job!

Started the 2nd air layer, at the top, a month after air layer 1. 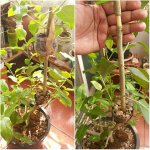 Another month later (totally 2), thick mass of partly air-pruned fibrous roots were obtained in both cases.

Both were potted into a nylon net bag (meant for storing vegetables in fridge) and placed into a regular plastic pot. The bottom 1/3rd of the pots are filled with rocks and the net bag rests on them. The rocks on surface are to weigh it down and offer stability. I hate wiring them. Too lazy for that.

These nylon bags are superb for root aeration & automatic air pruning of roots that reach the edges or base (same as a colander but much cheaper ! besides, I already had those black pots). I have had good results with them and vouch for them. Drilling / melting countless holes into a regular plastic pot, just isn't as good.

Both the specimens went thru few rounds of top pruning in subsequent months & growth was a bit slower than expected due to spider mite infestation. They are due now for a repot. I will air layer them both again, after a few months. The original parent specimen has undergone several prunings in the last 1 year and a good leaf size reduction has already happened. The extreme right image shows the actual leaf size next to some rooted cuttings of my prebonsai.

aml1014 said:
Multiple airlayers definitely do work, the only requirement is that you have supporting foliage in-between each layer. Good job!

Cool. I did not know a double layer could work. Nice work on the layering...and sharing of the progress and results.

Tieball said:
Cool. I did not know a double layer could work. Nice work on the layering...and sharing of the progress and results.
Click to expand...

Thanks Tieball. I am guessing that lot of people may not have seen visuals of the same, bcos an experienced bonsai artist may not even bother with the 2nd air layer as you would get a straight featureless trunk, like I did. Can make a raft bonsai from it though. Like The Martian, I just wanted to be the first at posting a pic of it and google obliged I have done double air layering on a white lead tree too and I wanted to do 3 on the same trunk ! But the 2nd air layer on top started decaying due to my neglect & mistakes. Finally, I got only 1 from it. I will post that experiment too, soon. Like Aaron said, as long as you have foliage in between, I guess you can do as many as you want, from an experiment point of view.
You must log in or register to reply here.