I’d like to document the conversion of this dwarf Alberta spruce to bonsai; got it after Christmas 2019. I performed a trunk chop right after I obtained it from someone, the scar has apparently almost healed over since. Not sure why, but it seems like it’s still bleeding sap (some) almost a year and half after trunk chop! I even put cut paste at the chop site at that time.
Regardless, it’s been transplanted out of the nursery container into wooden training pot with good sifted soil mixture, some native soil still remain but will be removed in subsequent repotting, when time comes. Also needs to fix some nebari issues and introduce some carving - hopefully it won’t bleed sap. For now, it’s pushing new growth and in good shape. 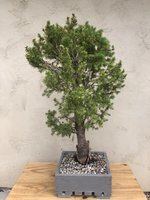 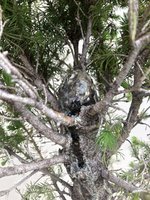 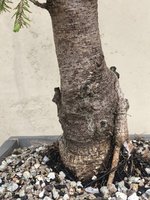 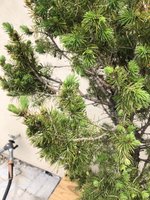 Ya know how I hate to be picky, but a wound that is leaking is only rarely referred to as "almost healed over after a year and a half". That's called festering in the common parlance. Open it back up, clean it up and seal it rather than leaving the wound to the elements. Season matters, so you can't do it until the major flow of sap typical in spring when it's flushing out a whole new crop of needles is over and done with. Wait until a dry spell in the heat of summer and do it up right. Autumn, better yet. Whatever you did last time, -don't do that again.
You must log in or register to reply here.