Here's a thread on a dwarf boxwood I acquired from bnut member @JudyB in 2014.

Current photo: This was taken after doing some thinning. After letting this grow wild for a few years (see following post for the history), I've decided that I need to start opening up some areas so that some branch structure is visible. It's like a treasure hunt, pretty difficult to see through the dense foliage so I've been just opening up small areas and exploring to see where I can reveal some branches/twigs. One issue is that once an area is opened up, if it doesn't "work" it will take a year or two to fill back in - that's how slow this grows. 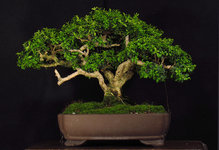 Some issues I'm working around - primary structural branches are kind of weirdly shaped and really can't be bent. I may need to rotate the front a bit as the subtrunks don't appear very attractive from this angle (but it is best for other reasons). Overall canopy is a bit even and probably too tall/pointed. Dead wood on left might be too long/straight.

That said, I do like working on this little thing. Funny, it was one of the trees I had buyer's remorse about when it arrived, but it has grown on me.

Here is the history:

Acquisition Photo, 2014. What was I thinking? LOL. 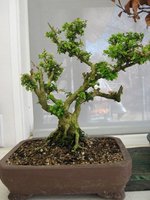 Didn't really know what to do with it so just set it aside and let it grow for a few years. Here it is in 2016 after a repot and addition of some guy wires to pull branches down. I see a tree shape starting to emerge. 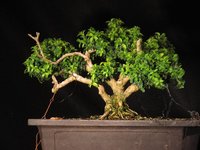 2017 - I think I had started to finally do some shaping of the canopy. 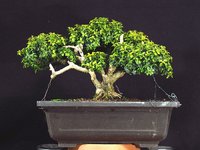 2018 - Repot and continuing to sculpt canopy. It's feeling a bit pom-pom or topiary like, though. 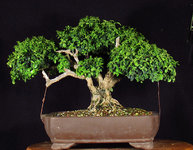 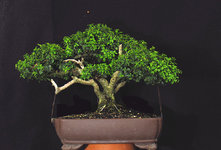 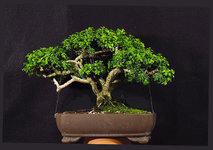 coh said:
What was I thinking? LOL.
Click to expand...

This sums up my first 4 years doing Bonsai.

Oh wow, that's beautiful! I just grabbed a tiny boxwood from Ace that was 50% for around $7. I'm thinking about planting it in the ground to increase it's size, or just throw it in a pot so I can at least have something on my empty shelf outside lol.

You've done a great job with this one! It always had good bones, but just needed a lot of time. I think it's time to get rid of the low left dead branch... Thanks for sharing this again.

Nice work! I'm starting to resist buying small nursery boxwoods because of how slowly they grow - the upside is that I don't spend as much money, the downside is that the boxwoods I do want to buy are fat ones which cost like 50 bucks or more xD
J

It looks like the triangle is fairly balanced semetrically. Maybe removing the dead wood would give it a more angled appearance. Or maybe you could just eccentuate that aspect with the dead wood? Just a thought. Looks like a nice tree.

@coh,
Thanks for this progression. First thought at looking at the present image was -yes, nicely done, I wish I took this approach more. The width height ratio, the bending of some rules, then seeing where you started from, really interesting and also inspiring.

I drive by this mature clump form dogwood every day, down the hill directly at it and have been thinking this is somewhere to go towards and I realize the challenge(s) -so many of this nature do not look like a tree, especially with a boxwood.

JudyB said:
You've done a great job with this one! It always had good bones, but just needed a lot of time. I think it's time to get rid of the low left dead branch... Thanks for sharing this again.
Click to expand...

I meant to reply to this but got sidetracked along the way. Regarding the dead branch...at some point it may be reduced or eliminated but I'm not there yet. I'm toying with the idea of bringing some foliage down in front of it to break up the long straight section, something like this perhaps. It may still be too long. The other thing I'm thinking based on the photos is to push in the upper foliage mass in from the right as shown by the arrow. This, along with some additional openings and irregularities in the foliage masses might help with the symmetry issue @JackHammer mentioned. 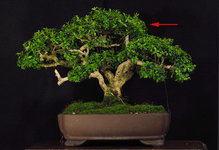 Or maybe just shortening the jin like this but I kind of like the additional length. We'll see, time moves slowly in the boxwood world... 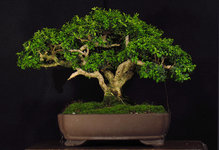 I like the shorter version of the deadwood. I think it's the upward turn that it takes that just makes it look awkward for me. As you said, it's a slow road...
You must log in or register to reply here.