I have a young JBP that is in the growing stage. It is planted in a large Vance Wood screen-sided planter. At the end of the top terminal there are multiple buds. I want to re-direct energy lower on the tree. I will perform the usual de-candle routine in early July.

Here is a picture of a later stage. 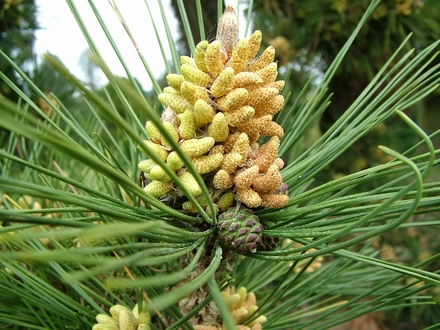 Hi Frank, what you are seeing is (male) pollen cones. It won't matter if you remove them now because the energy is already spent, which is very little anyway. The question I have is why would you be doing candle work at this stage? Once you start candle work caliper growth slows waaaayy down. I don't know your ultimate goal and I'm being quite presumptuous, which I shouldn't but I would hate to see you lose years in development if you want a little girth
Wood

Wood
Thanks. I DO want girth at this point. I was thinking that if I "pre-candle" it would re-direct the energy lower on the trunk.

I think it would produce new buds lower on the trunk but only by a 1/16 of an inch or so.

It's like the plant commits to growth at that point and it's decision is final.
G

Frank, have you ever noticed when pruning hedges or landscape plants that the new growth appears where the cut is made. It's the same with bonsai physiologically. In the development stage the main goal is to focus on building one thing at a time. It starts with the roots,trunk, branches and later secondary branches and ramification. If initial rootwork is done then concentrate on caliper at the point below where there will be direction change from a new leader. When that is established use the original top as sacrifice. you will have to thin the sacrifice, anything that shades the eventual tree and remove needles to just under the sacrifice's bud whorl and let it grow wild. Those shoots at the end are the driving force of the tree. It's where the majority of auxin's are manufactured, they grow roots. It's the combination leaving those buds and stripping the needles and weak branches on the sacrifice that kicks in the survival mechanism (back bud) and you don't stop or slow down caliper growth Hope I'm clear. This is just one way to develop black pine, there are as many as there are people and everyone has a reason for doing what they do. There is even an old Japanese book 80 WAYS TO GROW BLACK PINE. Have fun with your pines. When you grow one for yourself you will really appreciate a good one when you see it.
Wood

Hi Frank, with this picture, I hope it makes clear to you. Bonhe 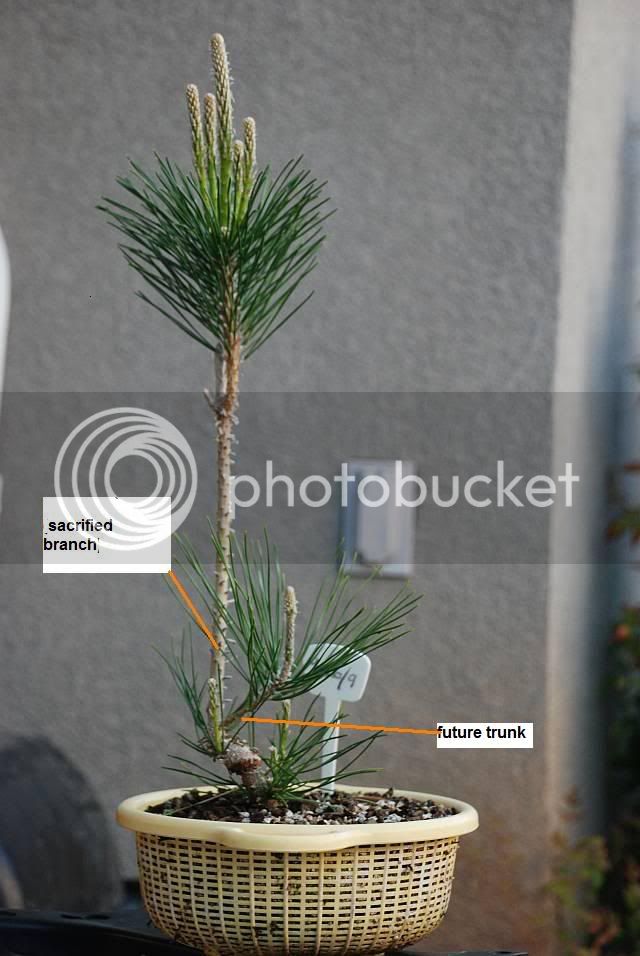 Bonhe, I couldn't have said it better A 1000 words
Wood

wood and bonhe, thanks. That helps. I am familiar with pruning/pinchins maples and the fact that new growth appears at the cut. I guess my mind is messed up with what I have read about pines and pinching back/holding back strong areas to make the weaker areas stronger.
G

Frank, what you are saying is correct but only in the context of a finished tree. As trees go through differing stages of development there are differing techniques for each stage, one size does not fit all. This is an ongoing problem for most beginners with any new species. What most articles,books or publications address is the finishing, the easy part,the glitter. I just hate to see years of work wasted.
Wood
You must log in or register to reply here.