So here at the Bonsai Shogunate we really love our Hornbeam, American, European, Korean … you name it, it’s in the shop.

Final acquisition of the year (unless something else tasty comes my way) Anyway, there is a Korean Hornbeam, it’s going to be used for Shohin. Already consulted with a very helpful person on here regarding advice for further development. From the second bench top since it’s lacking some taper...

www.bonsainut.com
^ most recent Hornbeam post update, will be working on American Hornbeam’s this coming week.
So let’s get to it, went to a nursery today to look around and see how many European Hornbeams were left, since I got European Hornbeam , E. Beech and A Hornbeam last fall. Turns out they were selling these European Hornbeam for 5 dollars! each!! It’s a native nursery really so their customer base I guess wasn’t interested oh well .. better for me.
I snagged 2 , had to cut down to fit in car but cut at good parts of the tree to see where next steps would be in future. It’s ready to push so timing is now for work.
Step 1 was to remove the tree from grow bag, had to use a chopsticks first to make sure there were roots closer to top. Once I determine it would be safe to saw some root ball off I did ( and hack w a axe). Repotted in some kitchen sink and pumice kix since a lot of soil was still in roots after they were even rinsed. Cleaned up some of the roots and rootball , cut into closer to soil line with wetted sgangum to generate more surface roots … as the trees progress, I will reduce roots further maybe even grow box next year. But for now wait for it to bud out.. it’s almost ready to let it’s leaves out .. then make some cuts. Thoughts? I will post some possible fronts and pics of the work.

Sweet hornbeams! I’ve never found such nice material for 5 bucks. Can’t blame you for picking up more than one

Colorado said:
Sweet hornbeams! I’ve never found such nice material for 5 bucks. Can’t blame you for picking up more than one
Click to expand...

Thanks I’m exhausted did these all afternoon, repotted K hornebam last night and Friday my crab apples.. everything else is still in queue , maples , beech and mixed forest in the coming week or so. Then pines followed by juniper

Going after those nursery stock root balls will take it out of you! I would be exhausted too, ha. 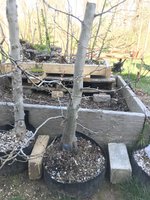 this big one is started to open up its buds. The smaller one died oh well. Marked my leader unless I should bring it further up? Any feedback or consideration would like to be heard please.. I know you’re there