Curious if anyone has any experience with the eastern white pine. I have a young white pine growing in the woods on our property and I'm curious about collecting it as a specimen. it's about 3 feet tall with a base trunk diameter of probably 2 inches. I just would like to know if it's worth the effort and about how much the tree can take as far as chopping back after being dug up.
P

I think I have seen a couple eastern white pine bonsai before. All of them were very old and large. I think what you will run into down the line with this species is the length of the needle. I dont believe there are documented techniques that drastically reduce the needle size like the jbp is capable of.
T

pwk5017 said:
I think I have seen a couple eastern white pine bonsai before. All of them were very old and large. I think what you will run into down the line with this species is the length of the needle. I dont believe there are documented techniques that drastically reduce the needle size like the jbp is capable of.
Click to expand...

yeah that's what I've come across in my search for information. are pine needles something that will brown if you cut with shears? I assume that's a yes but it worth asking.

I've never seen many P. strobus bonsai, and I'm not sure why it's not used more. But I know it's possible to develop a good bonsai from one: Jim Doyle's eastern white pine bunjin took the "Best of Show, Professional" award at the 2010 Mid-America Show, and it's a splendid tree!

So it's possible, but I don't know what hoops you may to jump thru along the way.

If nothing else, you could collect that little pine (next spring) for a learning tree.

I suggest finding a way to contact those who have been successful with pinus strobus, like Jim Doyle.
I

Fire up your translator.
http://saarbonsai.blogspot.com/2010/08/der-weg-einer-pinus-strobus.html

That's crazy! Besides the techniques, where did he find pinus strobus material like that??
T

wow that is quite the pine he found there! thank you guys for your input btw!
B

Thats the issue /w EWP's, straight boring trunks, if you find something good it can be worked out. I'll try to find the article I have , it's by a Jerry something, not Mieslek.
P I'll be putting this in a training pot next year. It was some random tree my dad put in a pot 18 years ago, and there it sat on his back porch. I think it was even mistakenly blasted by a weed whacker once. Do the elements of neglectful parents count as "yamadori"?

We shall see about the needle reduction. I'm curious myself.

This tree is owned by a very talented member of the Toronto Bonsai Society (not at liberty to post his name, although I would love to give him credit). He got it from a prolific collector Jerry Vlcek (see article below) who has collected a number of excellent P. strobus yamadori from the Canadian North. Jerry is who Bill S was thinking of. I posted the link to the article below. He was one of the greatest collectors in North American bonsai (I say was because he has left the country). 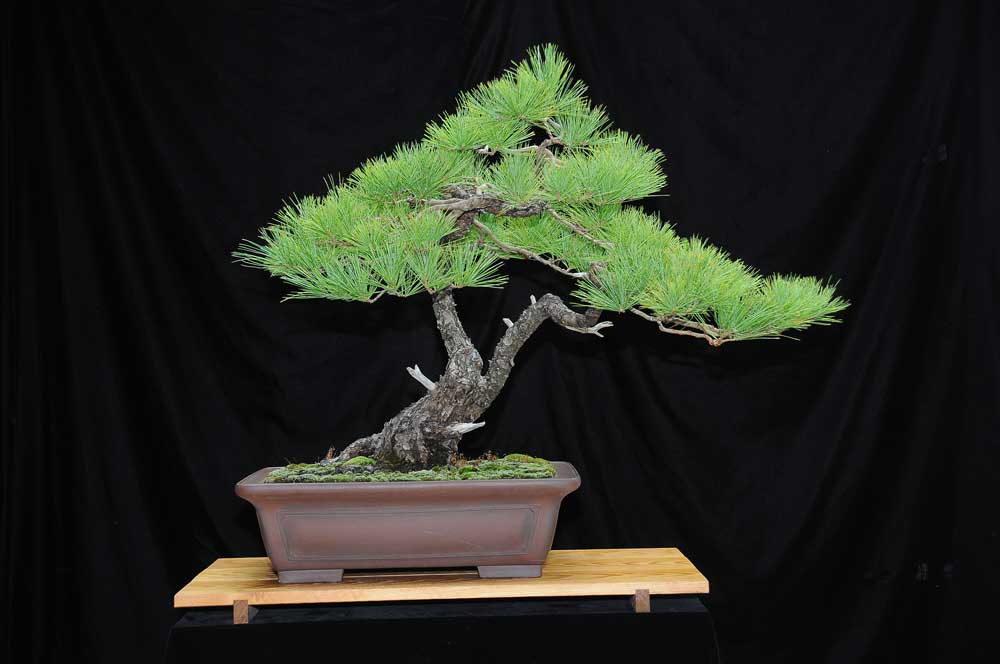 The artist's tips on improving ramification, backbudding, and therefore improving needle size: use insanely coarse soil. Like the largest particle size of akadama, the stuff that looks like dog food.

Still, you will never get needles like a Japanese white pine. So they are only suitable for larger bonsai. The one I posted is relatively small for an EWP (probably 16"-18" from the lip of the pot), so the needle reduction and ramification is quite impressive.

This article is probably the best information on EWP you will find online. Keep in mind that Jerry is old school, so his soil mix is a bit dated.

Also see page 88 of "North American Bonsai" by Marty Schmalenberg to see a lovely large (42") EWP (also collected by Jerry, of couse) and for some more species specific tips.

Like many native species (Thuja occidentalis, jack pine...), they are not worth starting from young material. But if you start with quality yamadori, they make outstanding bonsai.
Last edited: Aug 23, 2011

I've always wanted to create bonsai from EWP, and I've read all those articles, but unfortunately all of the EWP in my area have large needles and develop their bark when they're already too big to collect.

I actually read a taxonomy article on EWP, and it was stated that the five-needle pines are known to be genetically diverse, even within the same vicinity. EWP growing in Canada and the northern mid-west are actually genetically different from those in the eastern US. In the same way, in Japan JWP from the north are referred to as P. Parviflora var. Pentaphylla (having longer winged seeds), and in the south P. Parviflora var. Himekomatsu. While you may find differing opinions among some Taxonomists, all agree that five-needle pines have a high degree of genetic diversity. In fact I have one JWP 13y/o seedling with bright green 3 inch long needles, and JWP with blueish needles that grow barely an inch.

This photo is from the Chicago bonsai society.

tanlu said:
unfortunately all of the EWP in my area have large needles and develop their bark when they're already too big to collect.
Click to expand...

My area too. All of the nice EWP are collected from the ends of the earth where they are naturally stunted and remain small over decades, while developing their bark. i.e. yamadori
B

amkalid, exactly thats is the guy I refered to. The biggest issue refered to is to find the trunk, thats like finding good mughos, and junipers during a home depot crawl. Yamadori(good yamadori ) is a must with these.

As to needles, at some point needle cutting could be an answer, but for only a week or so before the tips browned.

I guess if you guys that have them handy, try stomping a couple, throw on some wire and twist and contort a few, then go back in a couple of years and do it again.

These do carry cedar apple rust, and will get pine scale, both can be dealt with, the rust is worse for your other trees(malus, and junipers), so keep them apart if you are trying them, but EWP is so plentiful, it probably doesn't matter.

tanlu said:
This photo is from the Chicago bonsai society.
Click to expand...

This tree is in Asheville NC at the NC Arboretum. The picture you posted was taken by me, but I'm not sure where you got it from. Its posted here originally:
http://www.upstatebonsai.com/glr/v/bwaynef/NCArb/July08/ed_DSC_0023.jpg.html

If you'd like to see an updated picture of that tree it can be found here:
http://bonsaistudygroup.com/bonsai-...oretum's-bonsai-collection/msg10696/#msg10696

bwaynef said:
This tree is in Asheville NC at the NC Arboretum. The picture you posted was taken by me, but I'm not sure where you got it from. Its posted here originally:
http://www.upstatebonsai.com/glr/v/bwaynef/NCArb/July08/ed_DSC_0023.jpg.html

If you'd like to see an updated picture of that tree it can be found here:
http://bonsaistudygroup.com/bonsai-...oretum's-bonsai-collection/msg10696/#msg10696
Click to expand...

I found it on flickr, it must have been mislabled.

It's a beautiful tree, and thank you for the updated photo! Who and where it was collected? Also, do you have any other photos of EWP bonsai??

Jim Doyle donated his Pinus strobus bunjin to the Permanent Collection at the Chicago Botanic Garden. Here's a picture taken last weekend with my little point-and-shoot.

I saw that tree on flickr and I love the nebari. Do you know how I can contact Jim? I'm very intrigued by Eastern White Pine bonsai, especially since they grow like weeds here.

From what I understand, the stands of EWP in the northern mid-west and Canada are genetically unique to the ones on the east coast. All successful EWP bonsai were yamadori, and were found in those areas mentioned.

Wayne Schoech, head honcho (I think) at Stone Lantern, did me the honor of using my picture of Jim Doyle's white pine, in his latest post on "Bonsai Bark. He had some perceptive things to say about the tree itself: http://bonsaibark.com/2011/12/30/a-rare-wonderful-bunjin-bonsai/
Last edited: Dec 30, 2011
M

Since I speak German I thought I translate some of the text from the blog posting. The title translates to: The (design) Path of a Pinus strobus (that wasn't hard to understand... I know.

First picture
This it is, the Pinus strobus or Wymouth Pine in German, that belongs to the family of pinaceae. This five needle pine is native to North America.

Second Picture
It was found along a main street, planted in a concrete planter. In 2007 I transplanted it into a plastic (bonsai) pot. The age of the pine is about 50 years.

Third Picture
In 2009, it was finally time to do the first round of design (on the tree) during a workshop of the AK Saarwellingen (local bonsai club) in the Old Townhouse (a nice restaurant/pub/meeting place (I know it, great beer and food).

Fourth Picture
The design of Pinus strobus as bonsai is very rare, not because it is not a beautiful tree, but because the branches break as easily as glas.

Next couple of pictures:
That required special measures/care. Of course the dead wood was worked on first, then the branches were first wrapped with gauze followed with old bicycle inner tube. This job was continued down to the smallest branches (because of the danger of breakage).
The attached broom stick was used to pull up a 4cm thick (1.6 inches) and only 15cm ( 6inches) long branch.
This is how the tree looked like after the first round of training. In the picture it is also easy to see the short branch that was pulled up.
The pulling higher of that branch proceeded in small steps. It continued in small steps.
In 2010 it was finally complete. The branch was were I wanted it to be without breaking. It (the tree) was also potted in its first pot.
This is how it looked in the spring of 2010.

Last Picture
And this is how it looks today. In one or two years it also might be shown at a BCD Exhibition (BCD - German Bonsai Club). I hope that you liked my short report. And to all that might be interested now (in bonsai) just stop by our club and participate.

Based on the description of where he found this tree and the perceived age I would speculate that this is the dwarf form of Pinus strobus. You can find Pinus strobus nana and similar cultivars quite often in German nurseries and big box stores. The regular EWP is much more rare. However, if this is really the dwarf Nana form of P. strobus then the graft is really well done and not visible at all.

I hope you enjoyed the translation of the German blog. It's interesting to see what he did with the tree.
You must log in or register to reply here.

Anyone has vendor experience with Branded Bonsai Andre Flores?
2