Found this growing under a Douglas fir on the slope going down to the river on my acreage and dug it up the beginning of March. Better late than never!
So far it is adapting well to collection, has leafed out and flowered over the past six weeks or so. Bare rooted and placed in pumice after collection. 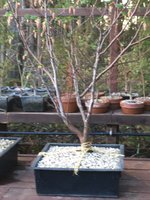 The tree had responded early to collection with leaf and flower production. I decided to maximize the opportunity to reduce the overall structure and hopefully induce lots of back budding during the currant growth cycle. So two pictures for the beginning of the growing season. Before and after reduction. Some branching will be reduced further next year after back budding makes those steps safer!
What I learned the first time with this tree. Very hard wood, does not heal well from rabbit damage apparently. Has a tendency to throw new shoots in damaged areas which quickly become dominant and stronger than the original shoot. Next lesson will be how well the tree responds to this aggressive approach after collection. Have applied organic fertilizer in tea bags to the surface of the Anderson flat. Will remain for the growing season. 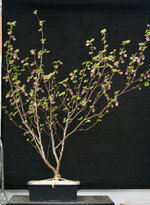 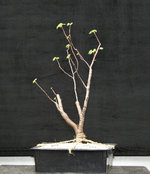