About 2 months ago, my future father in law called & said he has some bonsai trees for me ( the real story is, my gf called & said "we have to go to dinner at the shop" I said "WHAT!!" she said "dad has some bonsai for you" & I said "what time dear?"). I blazed over to his shop & was directed to look inside a van parked on the street. I opened the sliding door of the van & the first thing that came to my mind was "looks like a damn jungle in here!" The next thing in my mind was "how the hell am I going to carry these things up 2 flights of stairs to my bonsai area? Needless to say, he answered both questions before I even asked he said "i'll send the boys over to the house tomorrow morning" Yesss! Anyhoots, he told me his friends father had passed & his friend wanted nothing to do with these trees & that if he wanted them he needed to come right now or he'll kick them into the ravine!
Ok, long story short. There were 14 trees total, 2 were rotting & dead. I'll show you guys some of the trunks that I feel have potential.

This is how most of them looked. They were packed into the pot with regular soil. This one swallowed up its rock lol 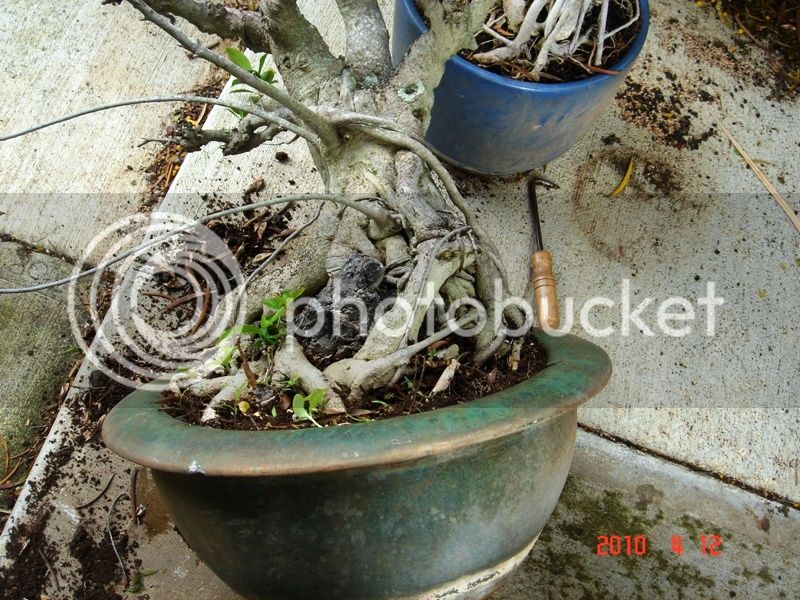 Hows this for drainage hole? The inward lip of the pot made getting these trees out a LOT harder! 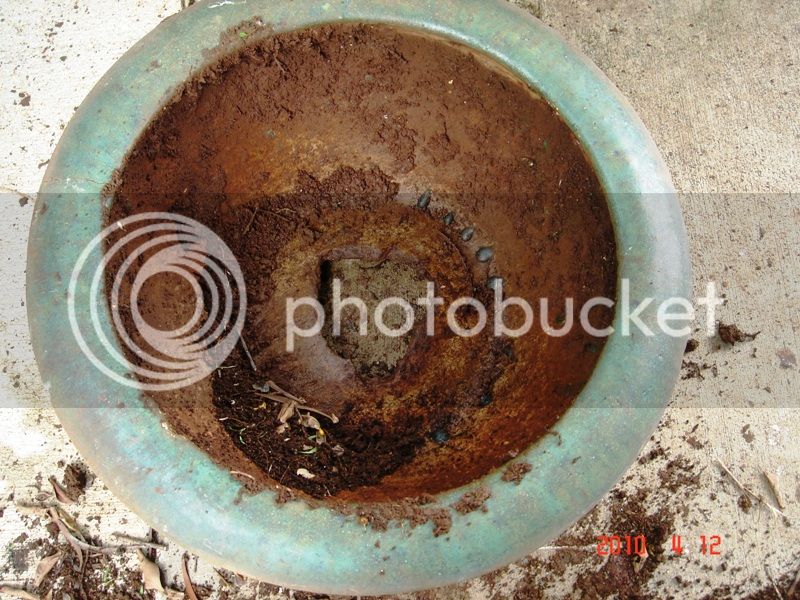 Finally out of the pot 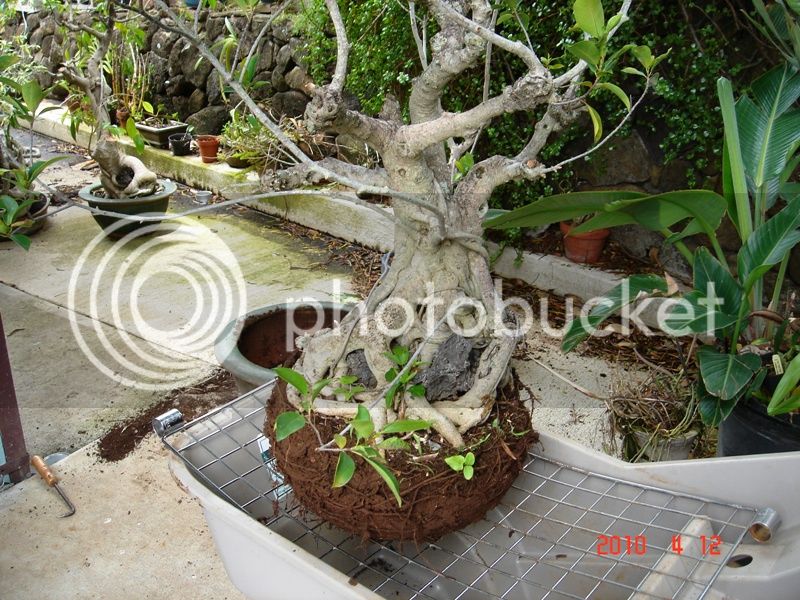 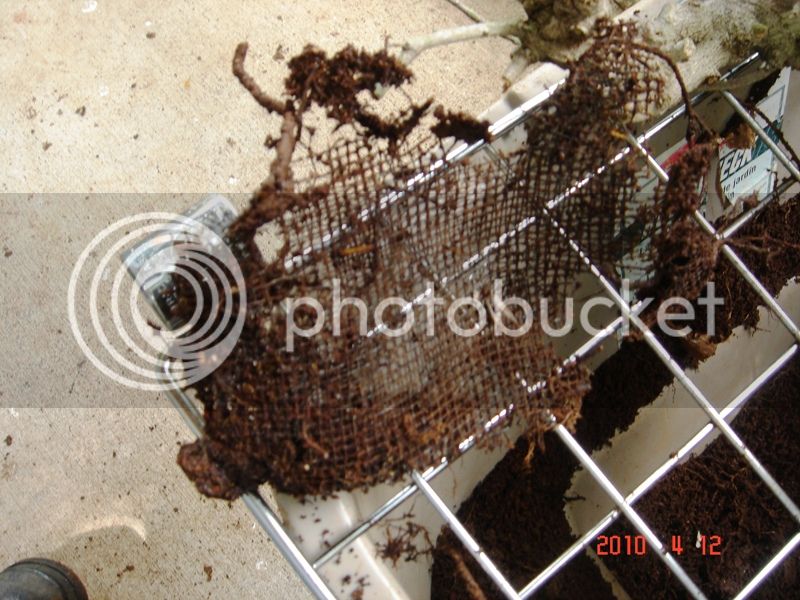 Also halfway up the rootball was this tera cotta pot ( maybe he was going for the flat rootball?) 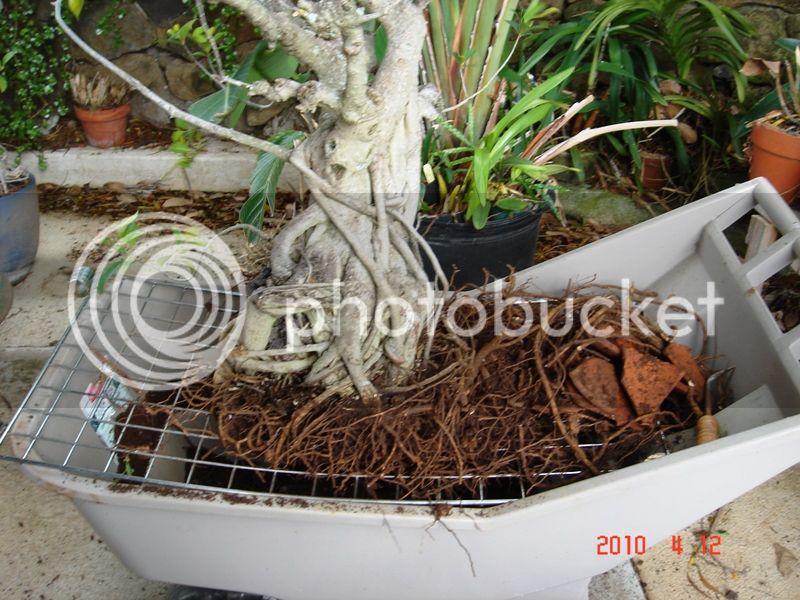 These trees waited nearly 17 years to be repotted. I think they are happier now. All foilage are tall & lanky (probably poor lighting & lack of care for years?) 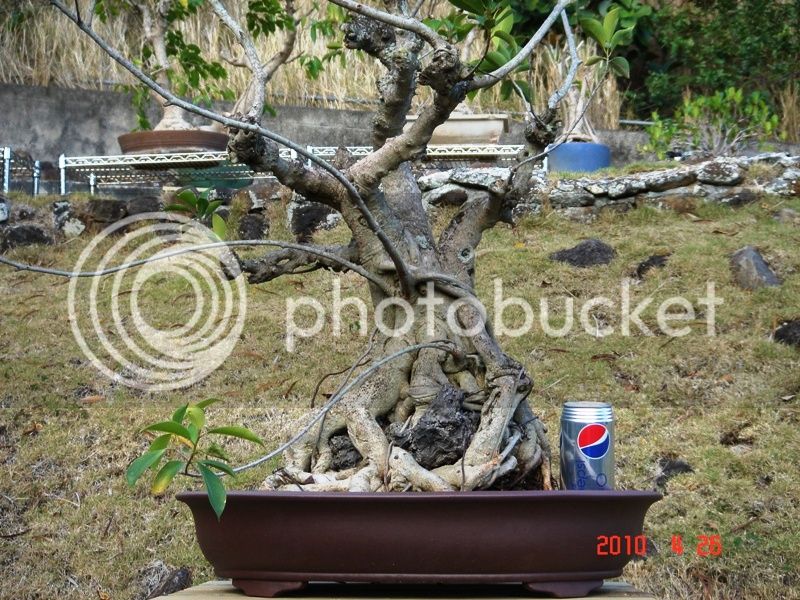 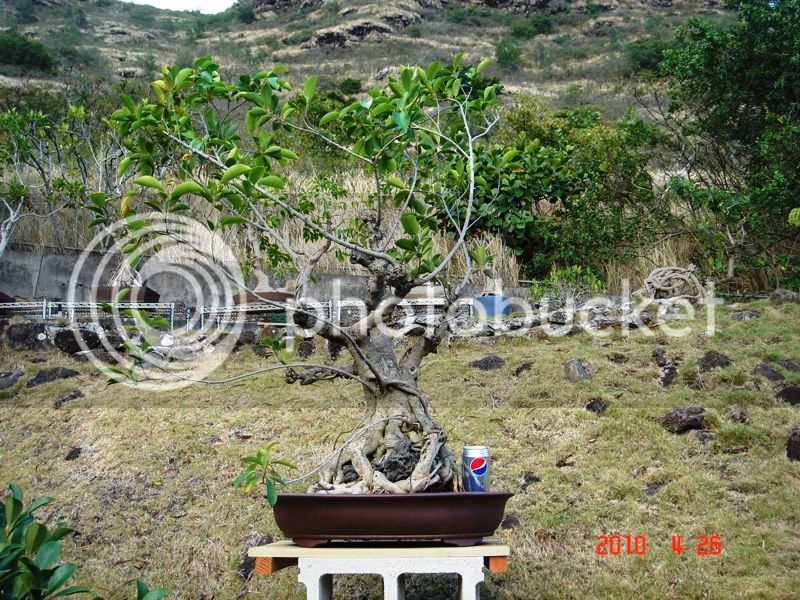 Heres another after repotting 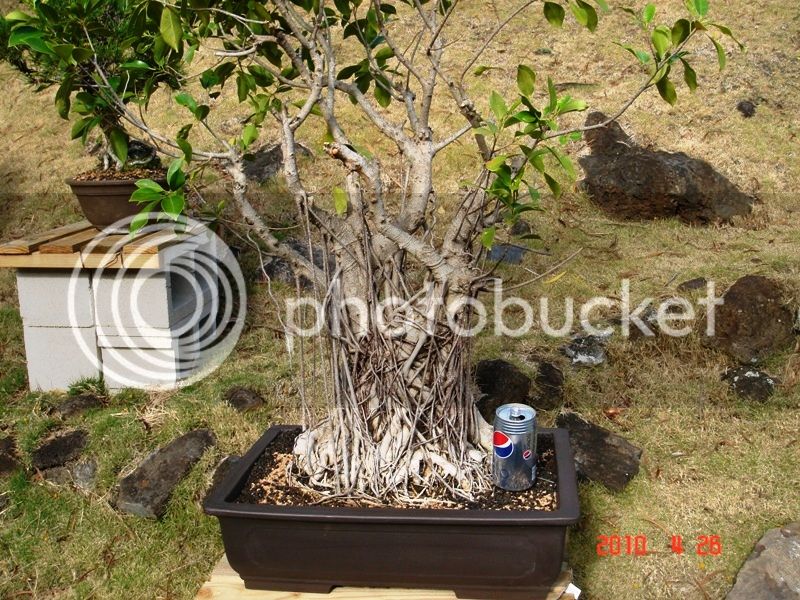 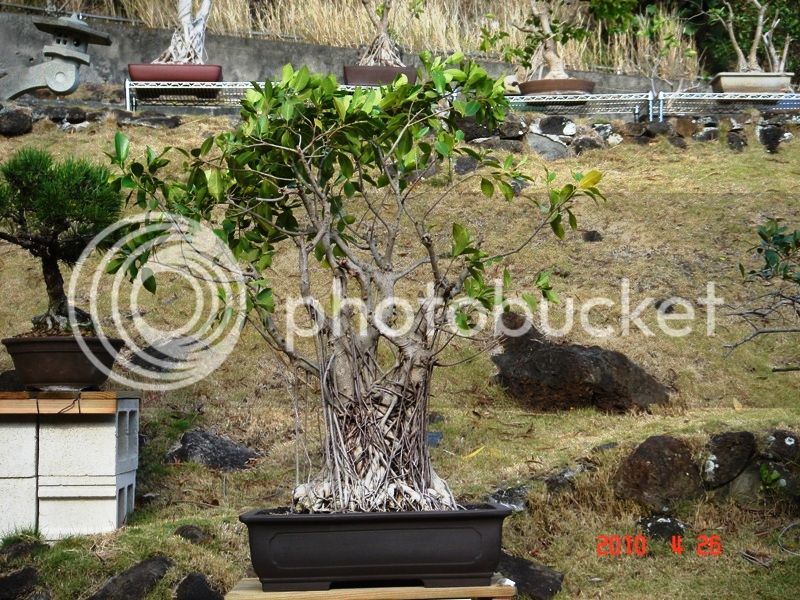 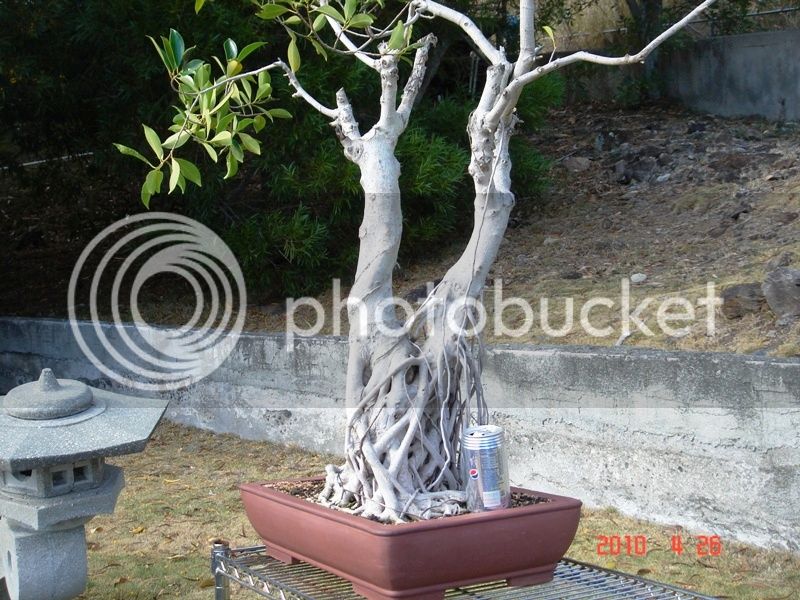 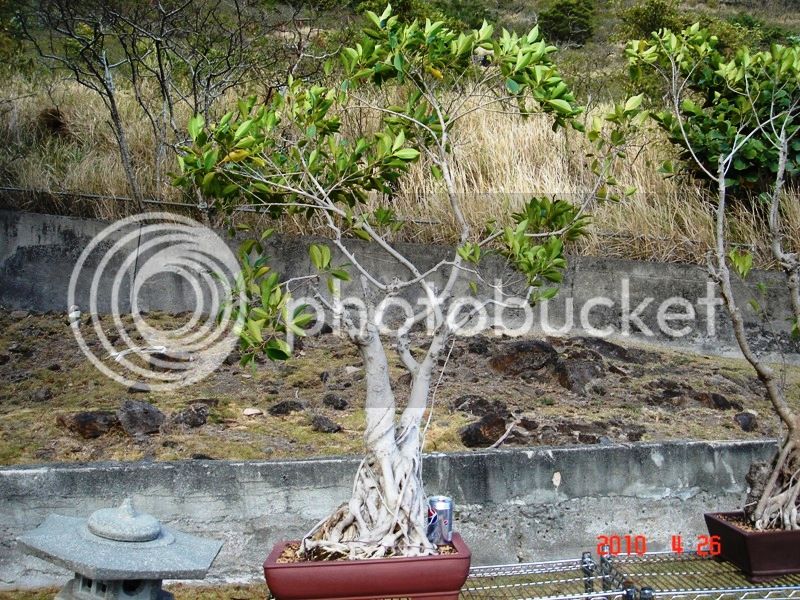 This one waits for a pot, the pot arrived crack but a replacement is on the way 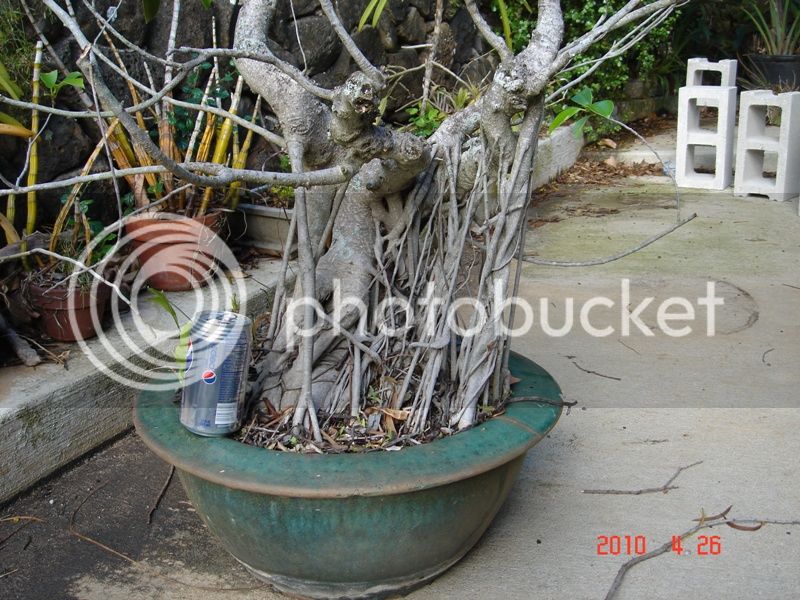 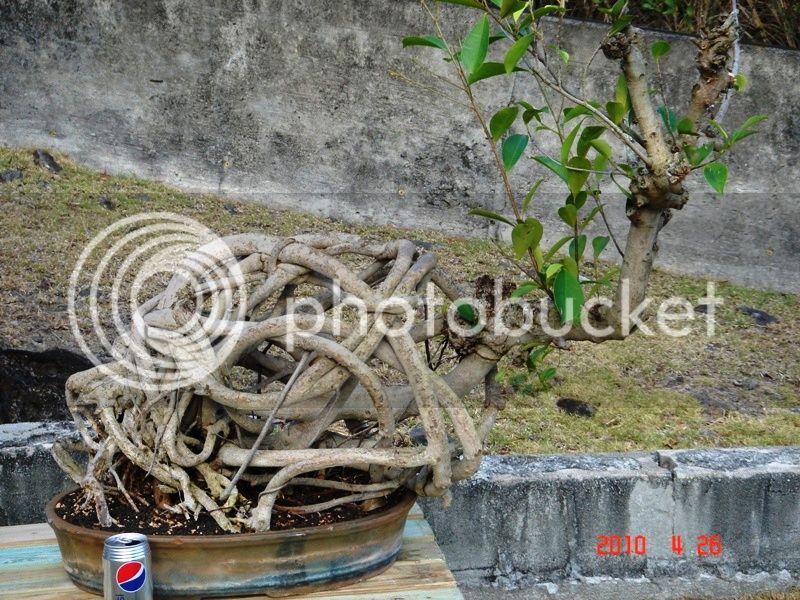 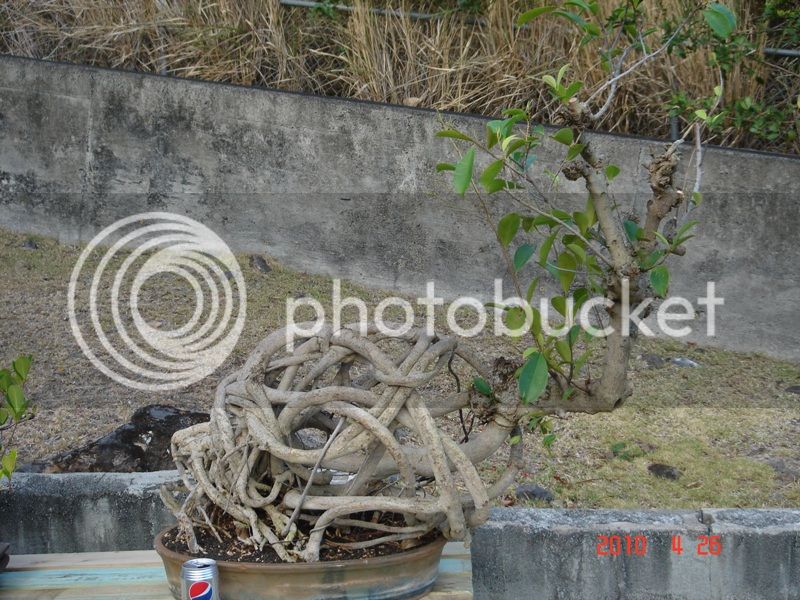 Thats all for now, they all will receive TLC & will all be cut back next year. OBTW, my back hurts

Dang, those are some wicked, gnarley old trees!! Good luck with them..

I swear I never have seen anyone fall into such good fortune Duane ......... Great Score!
B

A lttile sweat and TLC and you'll have an awesome addition to your collection. We should all be so lucky!!
B

And I was all set to give you my shipping address.

A nice bottle of single malt scotch is in order for your future father-in-law!

thats some really awsome figs you got there! keep us posted on this guys

Very very cool! I am happy for you... and the trees will be very happy to be in such good hands.

the3rdon said:
Dang, those are some wicked, gnarley old trees!! Good luck with them..

Tachigi said:
I swear I never have seen anyone fall into such good fortune Duane ......... Great Score!
Click to expand...

Thanks Tom, for some reason or another, I feel these trees were meant to be here? Strange as it sounds.....
I remember three months ago at the end of our club meeting, someone said we might go to look at some ficus trees & that the owner had passed away.
We never went, not sure why? I told my sensei about the trees that I got & he asked me where did they come from? I didnt know at the time but at the next meeting I
told him who my father in law got the trees from & yup, these were the trees we were supposed to go see. Heres the real kicker though, these trees were about 3 streets
away from where our club meets!....Go figure huh?
Last edited: Apr 30, 2010

bonsai barry said:
A lttile sweat and TLC and you'll have an awesome addition to your collection. We should all be so lucky!!
Click to expand...

I hear you on the sweat Barry! You should've seen me carrying these to their stands lol The boys just dropped them off, they weren't here to help me repot & move them to their stands haha. I dropped one in complete fatigue

Bill S said:
And I was all set to give you my shipping address.

Hi Bill, I wish I was able to ship out of Hawaii.....it is a catchy headline though

reddog said:
A nice bottle of single malt scotch is in order for your future father-in-law!
Click to expand...

Ahhh, hes definitely a keeper! He loves a cold coors light when he visits & I always make sure we have the fattest ribeyes to Q up
The best part about these is, my g/f cannot complain that I brought more trees home! It was the first time I got absolutely no flack about new trees! Yeehaw!
Last edited: Apr 30, 2010

ericN said:
thats some really awsome figs you got there! keep us posted on this guys


Thanks Eric, I definitely will keep up with this post.

Victrinia Ensor said:
Very very cool! I am happy for you... and the trees will be very happy to be in such good hands.

Thanks Victrinia, I will do my best for these. Obtw, I read about them early blooming azaleas, please let me know if you find the answer, mines have a mind of their own & started to bloom a few weeks ago! I don't really mind the early bloom, I just with it would bloom all at once lol

Thanks Irene, I hear you but I tossed them in the garbage. One was a huge schefflera, its trunk was mushy when I grabbed it & at the time I just wanted to clean up our sidewalk a little.
You must log in or register to reply here.

B
Feel free to move this post if needed. wondering if anyone has any basic bonsai tools available for a reasonable price or... maybe donate to a beginne

How free draining should soil be for oak?