Looking for a little advice w/ this Giant Sequoia I've had since November 2021. Couple of questions:

Tree is growing new growth at apex vigorously and along some of the same branches that are exhibiting browning and greying. Any browned/greyed needles are bone dry and crush when touched.

Hi
I repotted my Giant Sequoia mid January and the tree only seems to be waking up slowly now. Can't confirm that repot went well, but I'm confident it will have. Much of my approach was guided by the information available on the Giant-Sequoia nursery website (referred to as "GS link" from here on out) This is a goldmine of info, largely tailored toward bonsai-ing this tree. Unfortunately the nursery and plant stock burned down in a forest fire a couple of years ago... I'm grateful the webpage is still up since I don't know where they stand in terms of reopening. Definitely check this out - it will answer many questions of yours.

As for my approach to the challenges involved in making a bonsai out of this species-
My tree was in a tall, ~15 gal container. I had known from GS link that the feeder roots are extremely brittle, which scared me for a while.
The issue is that obviously tree needs to be in a relatively shallow pot when all is said and done. So how best to make this transition? (This is a question I'm still asking, myself)

My repot involved shifting the tree into a large wooden flat I made. With each successive repot, I will reduce depth of pot and chop roots hard on about 1/8th of the root mass. This is paired with reducing the height of the tree ti keep growth tight and preserve lowest branches which would otherwise likely die off as tree gets taller. Rewire new leader, do some light pruning on most branch tips to ensure this new leader actually leads. I'm in no real rush but I figure it's better to take greater risks on younger stock than taking the same risks later on.
I think, generally speaking, you should look to increase width of the container + decrease height with each successive repot. Here are a bunch of pics of the process.
In my experience, reliable info is hard to come by with this species so your best bet is to learn through your own experience. I found that the feeder roots weren't *as* brittle as I expected them to be, which was a pleasant surprise! Some pics documenting the process a bit:

PS if you haven't been protecting your tree from the dry cold winter winds, you should start. Make a cold frame, put it in cold garage, anything to keep foliage from exposure to wind. The trees are insulated by snow coverage in their native range during winter.

I've not had issues repotting mine. I tend to do it in early spring but I have done one or two in summer. I leave a lot of root mass...~50%. The super fragile roots are the new growth feeders which are the white tips. Once the roots harden and turn red/brown, they're pretty tough. The white tips will break easily, though.

The dried tips are likely from dehydration. The tree has given up on them. It could be because of dry winds...I always spray the foliage when watering my redwoods. It could also be because of root issues. Mine were kept in Kansas City for a number of years. I'd leave them outside all winter there. I've learned that they can take quite cold temps as long as the rootball doesn't stay frozen too long. The roots cannot suck up frozen water so the top starts to dehydrate. I tend to get less die back if I bring them into enough warmth to melt the rootball so they can drink. But they have lived through sub-zero temps for a few days at a time.

They can also dehydrate because the roots rot from too much water. I've recently moved from Zone 6 to Zone 5 and I've not been paying enough attention to some of my trees due to other priorities during the move. Here are a couple of mine that have suffered through a week plus of subzero temps and now have been way too wet for the past two weeks due to rains and melting snow. The dieback is much more significant than I usually see from freeze 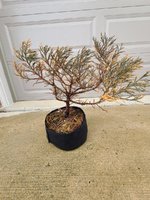 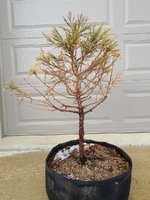 Thanks to this thread, I went and took a look at my sequoia for the first time in a few weeks. They should have come out of the rains a long time ago It looks like 4 of my larger trees may not make it. I'm hoping if I can get them dried out and warm that they might have enough energy left to turn around...so into the basement under lights for them! And some crossed fingers and toes for the next few weeks...

By contrast, here is one yearling from a mixed redwood forest planting of mine. 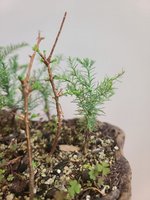 This planting normally sits right next to the larger trees above but was moved inside a few weeks ago after being frozen solid for a few days. Notice that even though it was frozen solid for a few days, the foliage is still nice and green. The roots were warmed up enough soon enough that they were able to suck up some water. Also, since the seedling is so small compared to the larger trees...it needed less water to maintain itself.

From looking at your pictures, I don't think cold is the issue. The foliage tends to turn purplish in the cold due to chlorophyll dying off. You can see the pruplish foliage in my pictures. That folliage is fine and will normally green up as the temps climb and the tree wakes back up. Your dead tips look more like dry air damage to me. You might try misting the foliage when you water. In the summer, I always spray the hose over all the foliage when watering and that seems to help with the dead growth tips.

So there's my experience anyway...
You must log in or register to reply here.