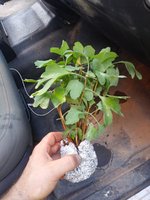 My experience is still pretty limited, but they will fuse. I've seen some twisted together palm tree looking fusions.
I bought about 30 of these guys earlier this year and am trying a fused base clump and a fused trunk upright. Your's are probably a little older than that.
Time will tell if they'll turn out well or not.

HoneyHornet said:
View attachment 399362
Today I came across a baker's dozen of Ginkgo saplings was just toying around with what would be the best route to go with these should I attempt a fusion or let them get some size on themselves individually
I'll take some pictures later but they all have nice root structure
Click to expand...

where you get those? great find

hinmo24t said:
where you get those? great find
Click to expand...

In philly there are some here n there right in the city..just looked under a big old one.. there usually aren't any saplings under they're just strong General foot traffic and I guess occasional Landscaping but this one was behind construction fence at a giant job site that has been under way for quite a while so I guess gave them a chance to grow
I was on site few blocks away so i was already wearing hi viz n hardhat ..strolled right round the fence n wiggled them free

HoneyHornet said:
In philly there are some here n there right in the city..just looked under a big old one.. there usually aren't any saplings under they're just strong General foot traffic and I guess occasional Landscaping but this one was behind construction fence at a giant job site that has been under way for quite a while so I guess gave them a chance to grow
I was on site few blocks away so i was already wearing hi viz n hardhat ..strolled right round the fence n wiggled them free

I almost got super excited because there was one about two feet high and had really good thickness but it turned out to be a sucker off of the main trunk
Click to expand...


that was a nice move, i did similar for my maples lol


i never saw any growing under the local one, but i think its nutless
S

hinmo24t said:
i never saw any growing under the local one, but i think its nutless
Click to expand...

Or maybe it is the one with the nuts. Ginkgo have separate male and female trees so only female trees will fruit. Yours is likely a male.
Ginkgo fruit have a very strong smell so nurseries usually only propagate male plants which means that females are reasonably uncommon.
Add to that ginkgo fruit is used medicinally so many residents of Asian descent and alternative medicine types know all the female trees that bear fruit and collect fruit in season.

Ginkgo are slow to heal so probably quite slow to fuse too. They do sucker readily so multi trunks are relatively easy to produce without the need for fusion.

I do not envy the loooong road ahead with gingko seedlings. They are one of the slowest developing trees I have ever tried but the result is worth the years.

Any suggestions on keeping these guys going should I get small individual cups to have them in or probably just do a planter tray.. wondering if I should keep the roots separate from each other and how deep of a container to allow them to get some grow room I understand it takes a long time but just trying to figure out how to set these up for maximum potential

I read something about saying the whole should be as deep as and twice as wide as the root.. so maybe a shallow and wide grow tray?

Should it be a more organic soil while they're in the stage or closer to a bonsai mix with at least some organic I would imagine
Last edited: Sep 24, 2021

@Shibui is right, Ginkgo trees have separate sexes. In the USA, trees brought in from Asia before WW2 were often just seedlings. In older cities like Milwaukee and Chicago (I'm mainly familiar with these 2 cities) there are a scattering of big old female Ginkgo trees. In fact, you Chicago area BNuts have a great source of Ginkgo nuts - the Frank Lloyd Wright Studio in Oak Park. Between Nov 1 and Christmas, every day a few hundred gingko nuts fall from the massive female ginkgo in the courtyard of the Frank Lloyd Wright studio. During the day the groundskeepers are meticulous about sweeping up and discarding the nuts. At night they accumulate on the ground under the tree. The courtyard is open to the street at night, just walk on in and collect nuts to your hearts desire. If you are only able to visit during the day, just ask a groundskeeper where they dispose of the nuts, I'm pretty certain if you are polite, they will show you and again you can have as many as you want. If you are in Milwaukee, there are quite a number of female ginkgo trees, in particular, along Oakland Ave, within 3 blocks of Lake Michigan. Also if you know your Milwaukee history, in 1924 the US Ambassador to Japan retired to Milwaukee, where he planted a female ginkgo in front of his huge, brick bungalow on the south side. I forget the address, but ask anyone in the Milwaukee Bonsai Society and the location of several female ginkgo trees are "common knowledge" in the group.

By the way, the use of ginkgo nuts is not just medicinal, they are EDIBLE. Delicious in fact. Preparation for planting and or for eating is the same. Collect the nuts you want to process and put them in a small bucket, cover with cold water. Important, perform all cleaning outdoors. The soft seed coat contains butyric acid and related compounds, which essentially smell like rancid butter. Not the vague smell of rancid butter that makes theater sold popcorn smell so good, but the deep, heavy pungent odor of rancid butter with "notes of vinyl" that will churn the stomachs of those with weaker constitutions. Tumble and scrub the soft pulp away. It won't all come away the first try. Change water. Allow to stand overnight in cool to cold water. Tumble and scrub the second day, discard water, replace with cold water. Third day tumble and scrub - if most of the odor is gone, they are clean enough. If odor is objectionable, repeat the process until odor of drained nuts is mild enough to not offend the nose. Seed are now ready to stratify or to cook.

I stratify seed in plastic bags with damp sphagnum, placed in the refrigerator over winter. Plant them out in spring the same time one would plant out acorns for oaks or other hardy tree seeds. I place pots in a wire cage to keep squirrels from absconding with the nuts. Squirrels and other critters love eating ginkgo whether stratified outdoors in autumn or in spring. Leaving the stinky seed coat on and just planting out in autumn works well too, but squirrels with eat them even with the stinky seed coat, so wire cages are mandatory.

If you want to use ginkgo nuts for a delicious treat, you can crack the cleaned nuts like hazel nuts with a nut cracker. The meat is a single kernel, and it is pretty easy to extract. I actually usually boil the whole nuts in water for about 20 minutes. Drain and allow to cool. They crack more easily after boiling. I then store the cooked kernels in the refrigerator. I sliver them and put them in soups, stir fry, stews and anywhere you want to add a little different texture. Flavor is mild. I use them much like one would use chestnuts.

Ginkgo trees do not begin producing nuts until about 30 years of age. The first "common" use of them as landscape and street trees did not happen until about the 1910 to 1930's. So by about 1950 most nurseries suddenly realized that planting seed to obtain ginkgo was a bad idea. That's when they began propagating ginkgo by grafting or rooting cuttings. When looking for female ginkgo trees, don't bother looking at trees planted after about 1960, as these will almost always be male trees. Find the older ginkgo trees, that is where the female trees will be.

Ginkgo propagate from cuttings reasonably well. Take cuttings after leaf drop in autumn. Wrap lower half of cutting in damp sphagnum. Put in plastic bag and store in refrigerator for the winter. In spring after frost danger has passed, plant out in flats, outdoors in bright shade. Only a few tiny leaves will emerge. Roots won't actually form until July or August. Once roots form, full size leaves will sprout. Leave the cutting grow until the following spring. Transplant and grow as separate trees. This technique is similar to the way blueberry cuttings are rooted, in that the cuttings are harvested after leaf drop.

Ginkgo are slow growing. Fusion projects will take years, at least 5 years and as much as 10 years. If you go that route, don't be impatient.

Ginkgo trees tolerate extreme root work if you want to collect ginkgo. The collecting was done May or June. All the collected trunks were reduced to leafless "stumps". I have a large 4 inch diameter trunk that was a 20 foot tall tree when collected. It was dug and chopped all on the same day. The trunk was shortened to about 8 inches and the roots were cut back to the point where it fit in an Anderson flat. Essentially there were no more that short stubs for roots. The tree sat, looking much like a giant cutting for a year, only a couple buds sprouted, and they did not sprout until August. It was the second spring that the trunk began to show life. Then about 6 buds sprouted and grew normal branches with a few dozen leaves each. This was from a group dig, the Milwaukee club had gotten access to a yard with dozens of ginkgo seedlings up to about 40 years of age and 10 to 25 feet in height. All reported similar results with the dig resulting in about 75% success rate. Trunks up to 6 inches in diameter survived the process. So if you are lucky enough to find "unwanted" ginkgo trees, you can dig and chop with a fair degree of confidence.

Make sense as to why Philly has some females planted along Broad Street Philly is basically As Old As It Gets
You must log in or register to reply here.