I have a grafted ginkgo cultivar. The graft union has clear bark differences and is at a good height to be chopped at so that's where I'm headed. Before I do the chop, I was hoping to layer one or maybe two trees off the top first...after all, the cultivar is what I paid for But the graft is untennable for bonsai

I started the first layer last year. I can't find those pictures to verify the exact date but it was June or maybe early July. By fall, no roots started.

I left the tree alone over the winter. A few weeks ago, the buds above the layer started to move so I peaked at the layer. Still no roots...which I wasn't surprised since there were none just before winter. The callus looked healthy. I scruffed it up a bit to and applied a little liquid rooting hormone and otherwise left it alone. That was about 2 weeks ago. Since then, the tree has mostly leafed out. There are even quite a few flowers and lots of healthy growth above the layer 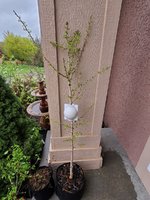 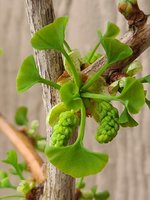 My original hope was to take this top layer, then take another layer just above the graft union and then make my final chop. My original plan was that this first layer would have been removed by now then the new layer could have been started after new growth hardened this year.

I'm guessing this layer will still take given how healthy the top is...but when?? There is less foliage on the section beneath this one so I'm guessing that layer would take even longer

Those of you with lots of layering experience...especially if it's with ginkgo...how safe would it be to start a second layer in series later this spring even if the first layer hasn't rooted out yet? My understanding is the vascular system of ginkgo is a little different than typical. Is there something I should have done differently with the first layer? Or be doing differently now?

Can I still get 2 as originally planned?? If it's going to take 2 more years to get the second layer, I may just chop and start development of the rootstock if I can ever get the first layer off.

I'm absolutely no expert on ginkgo, because they're still some ancient elusive one-of-a-kind species to me. I have just two of them, both wildtype.
But I have struck cuttings for two years that didn't produce any roots until summer. They leafed out as usual, started growing, and just did their thing without roots. Then around july they suddenly had roots all around.

Last year I jammed some finger-thick sticks in the ground and you can guess it.. They're leafing out right now.

What I'm saying is, be patient. Or just cut the layer off and jam it in the dirt since it should root. But if it doesn't, you've lost a lot of work and effort so I'm all for waiting it out.

I guess that IF the lower layer you want to make has its own foliage, it should be good. You'll be separating this one in summer, so the bottom one can continue growing and rooting for the rest of the year as if it was the apex.
You must log in or register to reply here.