There are a variety of ways to graft new or different foliage onto trees. This particular example is shimpaku to Rocky Mountain Juniper, and was a project last weekend at the garden. The RMJ is a large one which was collected a couple years ago. But like many large junipers, it needs some foliage brought in closer to the main body of the trunk, because there are long stretches of empty space. Also, here in the damp NW, RMJ can be susceptible to twig blight. Though it is not uncommon or greatly difficult to deal with/prevent, taking off the native foliage takes care of that issue.

Eric is showing the two places on the tree where the grafts will be made. 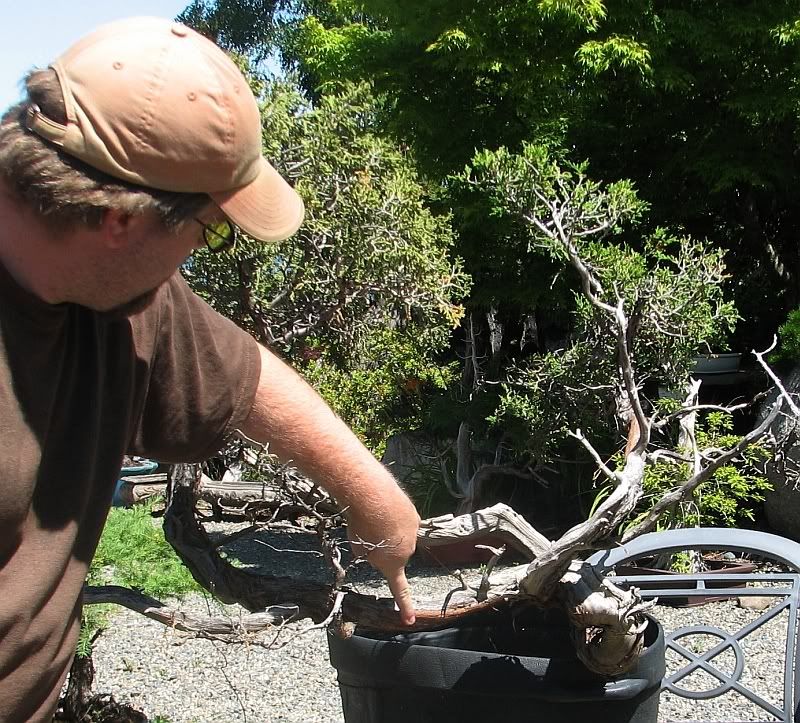 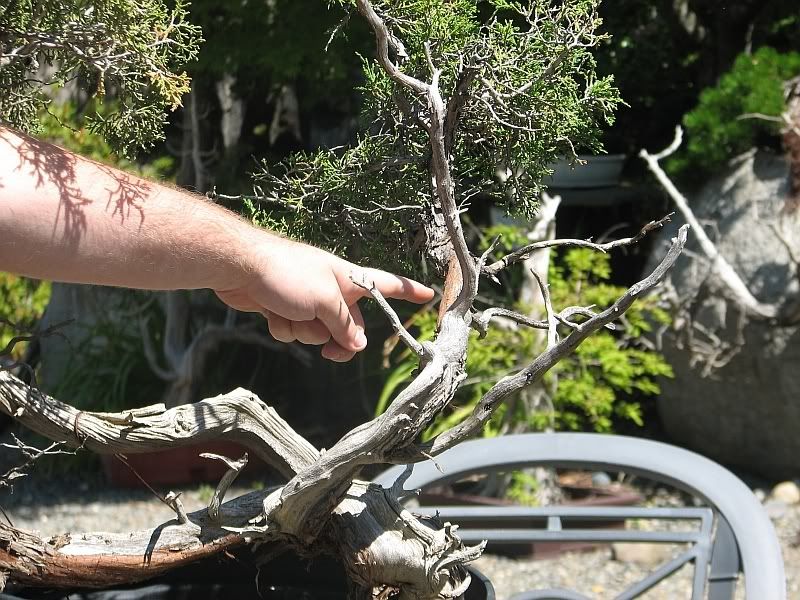 The guys settled a shimpaku plant into the pot with the RMJ. It can often be easier to use a whip in a 4 inch pot, but this was the tree which would suit the need and had strong whips that could reach where he wanted to go. It also ensures that the foliage is all from the same source, and therefore will have the same texture and growing habit. 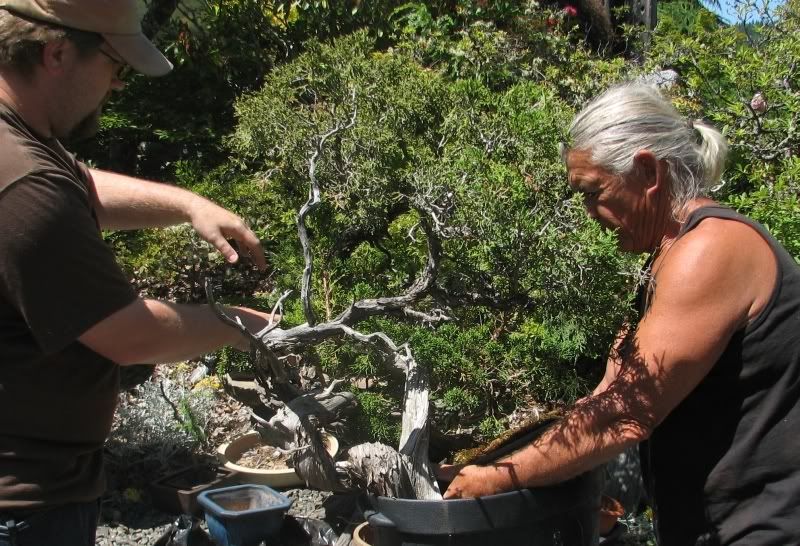 Using a “Ninja” carving bit Eric acquired from Dale Cochoy, Daniel cut a very clean channel in the live vein. This can be easier said than done, as one has to take into consideration the size of the whip relative to the channel you are cutting. You need to have a good close fit. Daniel commented that it was tricky, as this particular bit cuts through trees like butter. 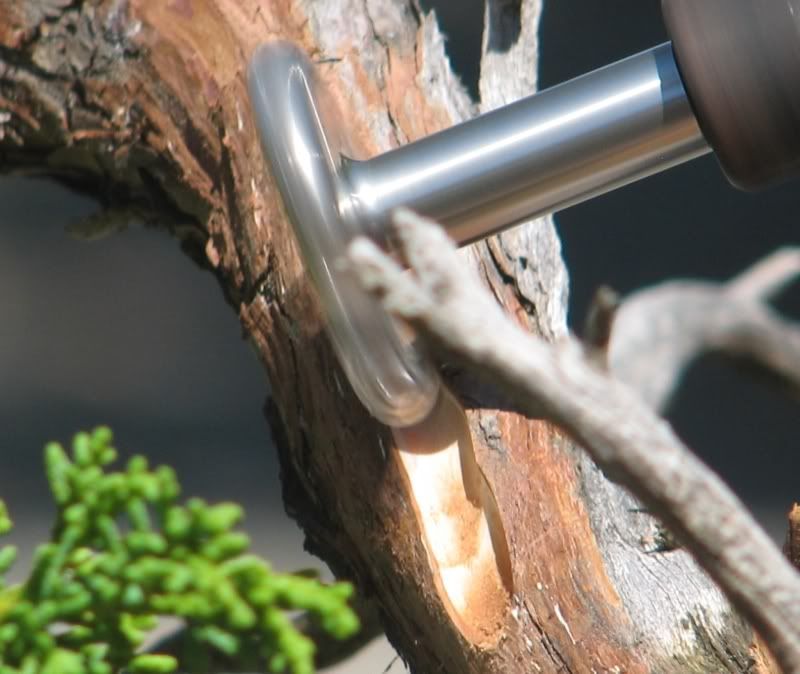 The whip had a section of bark sliced off to fit the length of the channel. You can see it was taken all the way down to the sapwood. 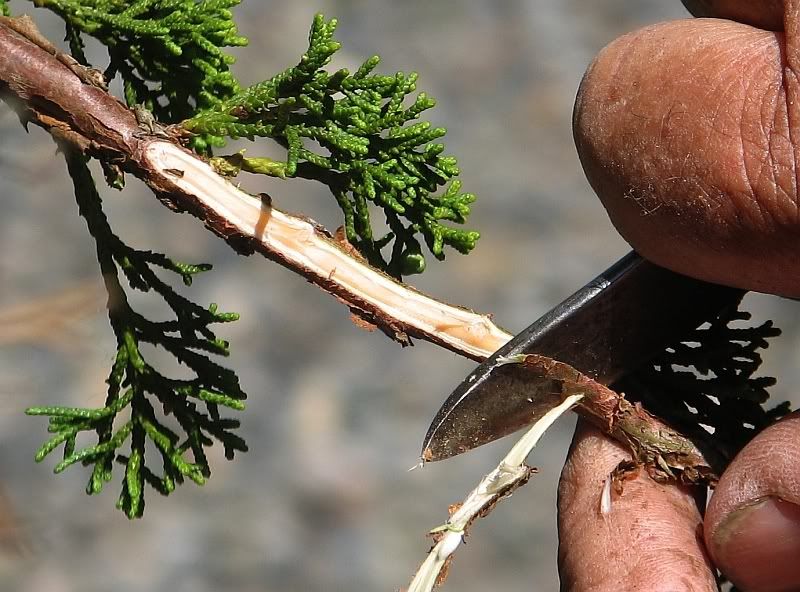 The whip is nestled into the channel. 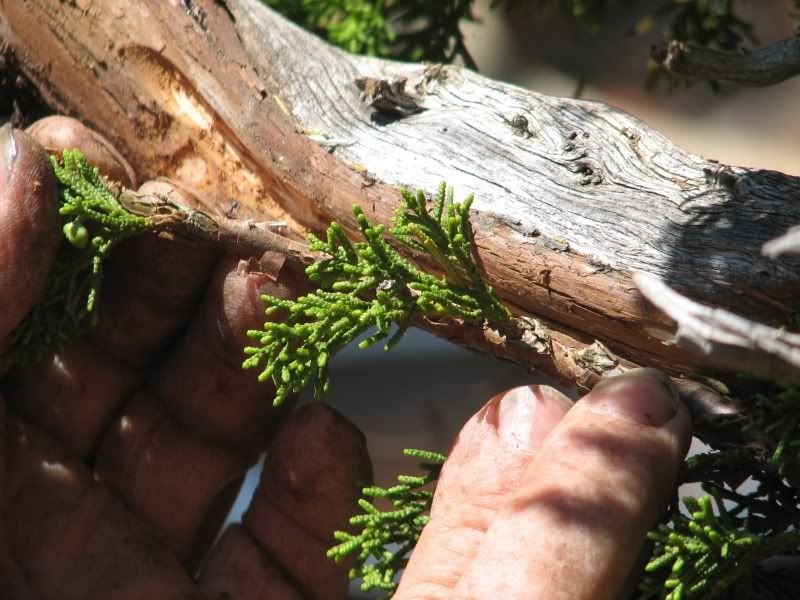 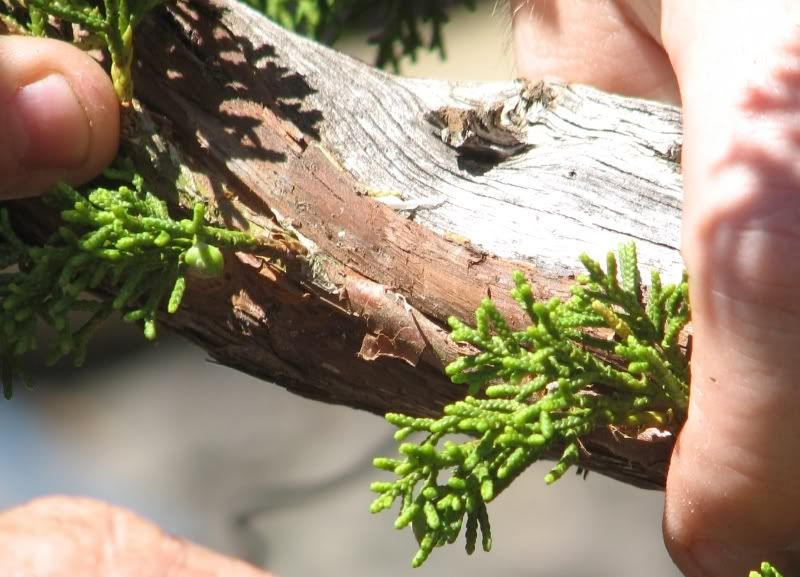 Electric tape was used to secure the whip tightly to the tree. Grafting tape among other things is also used. 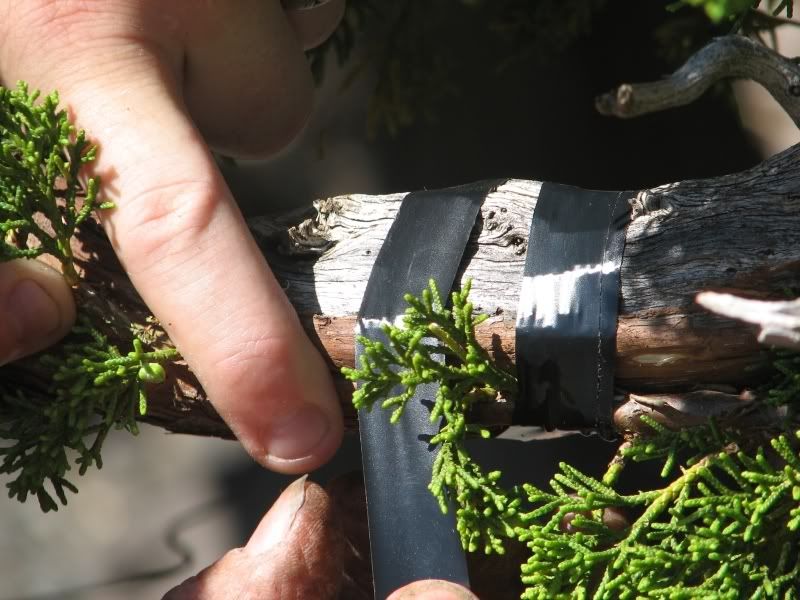 Here are the two areas after the grafting was finished. 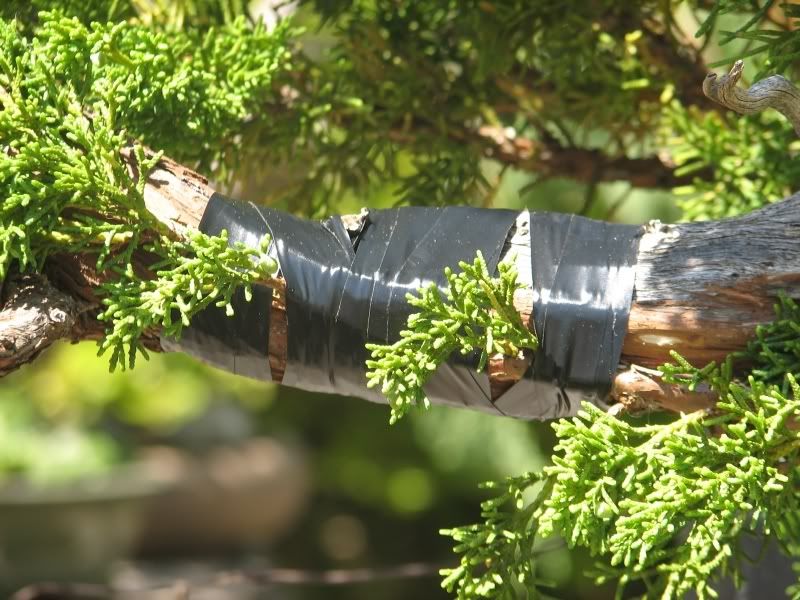 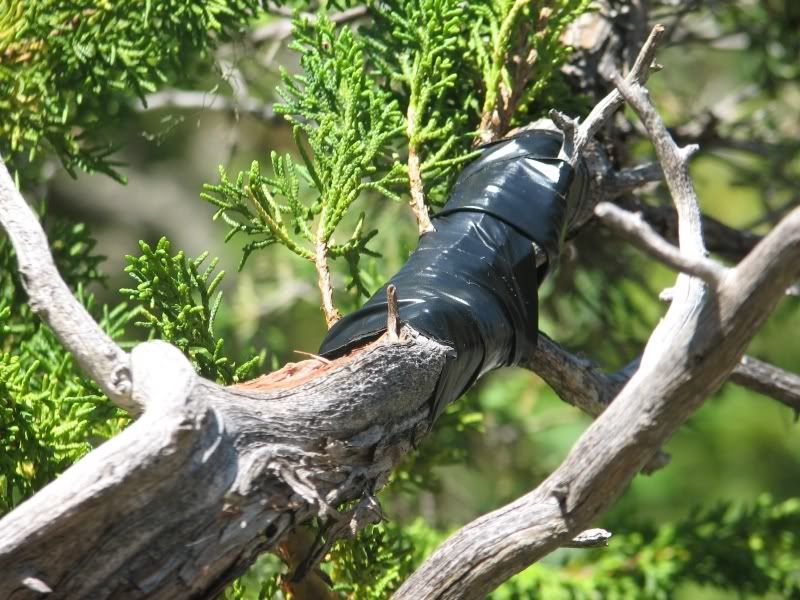 This tree will now be left alone for as long as it takes for the graft to hold. Daniel will likely girdle the whips next year (if they show strong signs of growth). This will force the nutrients trying to get back to the shimpaku roots to route into the RJM without stopping the uptake of water that comes from the shimpaku, which will help the graft to strengthen.

Your photos are very clear and show the operations well.
Thanks for posting Ms Vic.

thanks for the pictures!

I did the same type of graft this year, except it was procumbens nana foliage on top of a pfitzeriana trunk. I removed the wire and raphia this week to have a look and the graft had fused already.

However I am not sure that the root/foliage link went the way I expected... it looks like the pfitzeriana is using the procumbens root system

Why do you think that my friend?

Girdling the branch on the parent side should help... it'll force the routing. It'll strengthen the roots on the other tree, and then cut it off later.

Walter... I am glad you appreciated the photos... It's something I enjoy to do almost as much as bonsai.

Actually I think that because the pfitzeriana foliage has never been so nice and strong before I attempted the graft... at the same time, the procumbens branch didn't develop much compared to the other branches on the donor plant.

Then again, it is my first graft so we'll see in a couple of months
B

Victrinia, nice little photo essay, this looks too easy though. Did you have to really try to match the cambium layers between the branches and whips? What a great way to put on several branches at once.

Isn't that Ninja a killer, cuts like butter is a perfect description, great tool for carving.

Great photos! I would love to see a slightly wider angle showing the graft after it is completed. The close-ups are fantastic!

Great photo essay, Vic. I went and saw your handy work Saturday, and it was splendidly done. My similar crude attempt on that Sierra juniper used two potted Shimpakus for four grafts, but both Shimps were from the same plant originally, so the foliage should match - we'll see. The folks in hotter climates like Southern California have a real advantage time-wise in doing this, but they should take here eventually.

Where is the shimp? Is it planted with the host tree?
Irene

irene_b said:
Where is the shimp? Is it planted with the host tree?
Irene
Click to expand...

To be clear, is shimpaku foliage being grafted onto rmj tree to eventually make all the foliage on this tree shimpaku?
Lovely Pictures Vic

shohin kid said:
To be clear, is shimpaku foliage being grafted onto rmj tree to eventually make all the foliage on this tree shimpaku?
Lovely Pictures Vic
Click to expand...

I just found this thread and am wondering how the grafts are doing?
I see the grafts were done in July of last year, do you recommend this time of
year for warmer climates or would spring be better for florida?
S

wahoo172 said:
I just found this thread and am wondering how the grafts are doing?
Click to expand...

Read this thread the other night myself and was wondering the same.

We would do it when the tree is in it's most active growing period... which is the summer for us. If you live somewhere warm, I imagine that window is a lot wider.... but the point is that to have a graft take, you have to do it when the tree is pumping the most energy up the branches. We tend to leave them on for a while (2 years - sometimes more) because we are so cool and wet. In CA the same process can be achieved in half the time... because their growing seasons are so long.

For Florida, I'd do it when you see the tree and graft material is really moving... for WA... like somegeek, that means around the same time we did this one.

The graft plants are fine... we have so many trees to futz with at Elandan, we don't mess with something like this until it's good and ready... so honestly aside from knowing the graft plants are alive, we haven't taken anything apart to know if it's hooked up solidly. Better to leave it alone and not damage any of the fragile connections.

PS. Thanks for the nudge Dwight...

Vic, you mentioned in the original post that you would be girdling the tree. Do you mean remove the bark/cambium around the 'trunk' of the whip? . Can you elaborate?

Exactly... taking off a section of bark and cambium around the whip between it's rootbase and the level of the graft. The roots of the whip can still supply the foliage when girdled, but all of the returning nutrients will flow back into the new connections in the bark instead of back down to the roots of the whip... so it will strengthen the connections and the host. Once the girdling has been done and the graft still continues to grow, then you'll know it's likely well connected. Then later the whip's roots/base will just be cut off entirely.

Victrinia Ensor said:
Exactly... taking off a section of bark and cambium around the whip between it's rootbase and the level of the graft. The roots of the whip can still supply the foliage when girdled, but all of the returning nutrients will flow back into the new connections in the bark instead of back down to the roots of the whip... so it will strengthen the connections and the host. Once the girdling has been done and the graft still continues to grow, then you'll know it's likely well connected. Then later the whip's roots/base will just be cut off entirely.

I learn something new every day. Didn't know how the flow worked with regards to the cambium layer and the sapwood. Thanks for the explanation.

This is really interesting. In So Cal where Roy Nagatoshi does aproach grafts he says to graft in winter. That way when the sap starts flowing again it will naturally form the callouses that " heal " the graft. Of course what is winter in SoCal ??

Now try this on for size. I have a Cal Juni that has two recent shimp grafts on it ( not one of Roys trees ). On one graft the thing is growing like crazy , shoots 3" long BUT the scoin below the graft is dying. The other graft looks like bird doo but the scoin is doing great. Both were done using Roys technique and attached with wire so the graft union is visable and both graft unions look like they have taken completely. Maybe I need to do a little triming below the graft on the weak looking one to force it to take or die , one way or the other. The healthy looking graft I'm really thinking of just removing the scoin before the die back reaches the graft. If it croaks thats OK cause the tree has a large chunk of shimp already growing on it ( a first graft that was completed long before I got the tree ) as well as lots of native foilage.
Last edited: Sep 8, 2010

It's actually the "inner bark" or phloem tissue that moves the nutrients back down to the roots. Cambium is the tissue that makes up the new growth ring on a tree... while sap wood is the next few rings in moving water... and of course heartwood is structural but inactive.

Just want to make sure you learn the right thing.

V
You must log in or register to reply here.

Does grafting on a collected RMJ add value?
2 3 4