Information on Allepo's as bonsai.

I have been given what I think is an Allepo pine, which has a rather thick trunk for the size pot its been in. I'm looking for some clarification and information on the species. It is a two needle pine, the needles are very thin.
The tree is in a rubbish state, but I can see a few small possibilities based on what I have seen many Uk and European artists do with limited branching.
What's interesting is the two types of growth. You have very "normal" style buds then odd blue green growth inside the branches.

I'll post the tree, if anyone has any idea's they wanna throw around go ahead, but I do want to keep the tree as so far it's the only pine I have been able to keep from boiling in its own sap over summer.
We get regular spells of plus 45*c and higher with the nights still hovering around the 38*c and higher, its an extremely dry heat as well.

The long top bit has been left alive for a reason, I plan on carving it down to form a large shari.

I have a little seedling that I thought was a Mondel but I am beginning to believe that it is an Allepo. These two pines are commonly used as landscape here in Las Vegas (a climate similar to yours). I don't have a huge amount of personal info as I just started to cultivate them from the many seedlings in the area. However, here are a couple of links that might get you some more info:

Of course here is my little guy.

Hey there Milehigh,
Ae you sure that's a pine? The photo looks more like a cedar, maybe deodar due to to bud shape and the needles don't appear to be in fascicles.
Paul

PaulH said:
Hey there Milehigh,
Ae you sure that's a pine? The photo looks more like a cedar, maybe deodar due to to bud shape and the needles don't appear to be in fascicles.
Paul
Click to expand...

No I am not sure, I am no expert. This is especially true as it is a volunteer seedling. However, take a look at this page. It is pretty much exactly what mine looks like:
http://amap.cirad.fr/Pines_cedars/plates/plate5.html

Likewise these Aleppo (Pinus halepensis) seedlings look exactly like mine did. 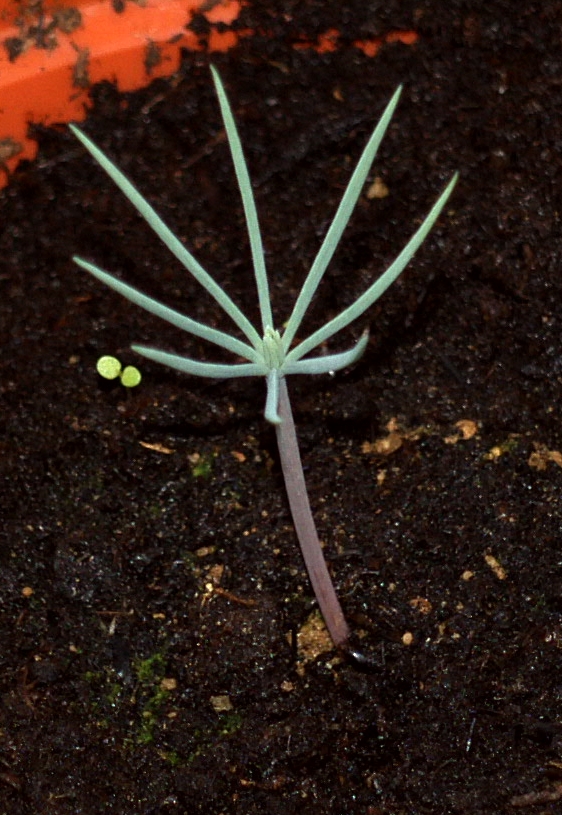 Some pines like Aleppo (pinus halepensis) and Italian Pine (pinus pinea) will keep this juvenile cedar like growth for a while. I think that it was Ernie Kuo who had an Italian Pine that he trained with the juvenile growth. Pines and cedars are very closely related though. I did see some Aleppo or Jerusalem pines trained as bonsai in an Italian bonsai photo book that came from Marco so maybe those guys can help.

You are probably right. As usual I spoke before thinking.
Paul

PaulH said:
You are probably right. As usual I spoke before thinking.
Paul
Click to expand...

Honestly I don't know jack about pines (or much else) but these do seem to have a few different characteristics so I am sure that if you were not used to looking at them, they might fool you. I hope they do well as bonsai because they grow well in Vegas and it could be the start of beautiful things.

Asus101 I do think you and I have much the same climate challenges that is one reason I like to hang out over at AusBonsai. Plus you Aussies seem to be real nice folk. Good luck with your Aleppo and keep us up to date!
You must log in or register to reply here.

Wintering Over on Balconies, Window wells, etc… request for information.

Request for Information from folks with Evergreen Azalea bonsai

T
Is European Larch suitable in my zone? Been told conflicting information.