I obtained this tree for about $10 as a rooted cutting in a 4" nursery pot. The sapling was planted in pumice and scoria. June 2014:

After purchase, I slip potted it into an 8" round nursery pot.

May 2015, showing a lack-of-water mishap: (and/or bad repotting aftercare)

Today, February 2017, in poor lighting after I repotted it into a 16" square grow box:

I've done wiring on primary branches only. The sacrificial growths are intentionally long and pointing up. The newest lower branches may be replacements for some of the more coarse lower branches. For now, lots of waiting and growing is in order. I'll feed heavy after the first flush hardens off. The buds are swelling.

The root mass is well formed! I like the impact collanders have on roots. I've been using pumice, lava, and diatomite gravel for soil.

I put a lot of careful time and attention into raking the roots and then working fine lava in with a chopstick.

My goals:
I'm guessing it'll be ready for a nice pot after 4 more growing seasons.

Your patience is paying off. Love threads where you can see how far a tree has come.

Looking good! Love the progression too.

Do you see those long branches with no side shoots? the ones you cut back? Larch tend to only grow at the ends of the branches. Trim them consistently during the growing season and side branches will develop faster. Also larch branching seems to thicken faster the more foliage there is instead of allowing long sacrificial branches.

parhamr said:
My goals:
I'm guessing it'll be ready for a nice pot after 4 more growing seasons.
Click to expand...

Out of your 5 goals, I'm afraid that there's one you won't reach: "Produce cuttings". I think the chances are very low but what is there to risk when pruning?...

The rest of the programme seems OK

parhamr said:
this old paper from 1973 is a decent guide
Click to expand...

OK then, keep us updated...

It's way too early to be certain about this, but I have 1 of 12 dormant hardwood cuttings showing greenery after a week: 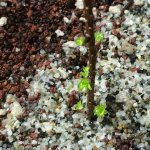 About half of the 12 cuttings have shown bud swelling. I just need to keep up a good hand-misting routine

I'm expecting young cuttings, while in leaf, will have a much higher rate of success.

This seems promising. It's not yet desiccated and the 32W CFL seems to be what it likes/wants.

One chaenomeles cutting from the same batch is also still going.

If those Larch cuttings take I will be more than impressed .....

One cutting still appears very promising. The first to burst had dessicated and died. (But it did have about a pinky-nail's worth of roots!)

All of my cuttings have failed. I've not been able to mist them frequently enough. Now I see the value of a misting chamber

I think I'm still interested in trying a tiny and stout informal upright.

This growing season I had great results with secondary and tertiary ramification.

Tonight I wired most of the tree and removed unnecessary buds (crotches, downward, etc). The wiring was to bring branches downward and to fan them out so the foliage was overlapping less.

I think the bottom 2–5 branches might be removed in the future. For now, they’re useful to continue putting girth and taper into the trunk and for continuing to improve my wiring skills.

Looking damn good for only a few years.
You must log in or register to reply here.