Got tired of searching through my large thread so have decided to start some individual tree threads. This is an update on my first Japanese Black Pine, which I've had since 2013 I think. When I got it the branches were pretty leggy, so most of my effort to this point has been devoted to increasing backbudding and gradually cutting back long branches. Needle length has not been a priority and I've resorted to needle cutting when needed. I think I now have enough interior branching/budding to start making some more significant structural changes, which may involve some additional branch removal, separation of foliage masses into pads, etc.

May be due for a repotting in the spring as it was last done in 2015 and the soil is becoming somewhat compacted.

Yes, there are guy wires! LOL.

The apex is way too dense. There is an area of reverse taper in the upper trunk (it can be seen as the trunk segment that moves to the left just below the apex) so I will have to see if I can shift some foliage into that area. Lower branches are pulled down to get more light inside, I don't think I ultimately want them pulled down like that.

If anyone has any thoughts about how much branch removal/reduction might be appropriate, please let me know.

JULY 2021 (after decandling in mid June, I did leave a few shoots alone in some areas that were weak or where I wanted some length) 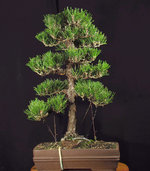 OLDER PHOTOS: (I have to look in my files to see if I have anything prior to 2015) 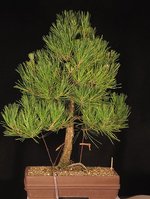 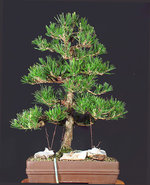 You said it: there needs to be some thinning up in the apex, and this fall, go ahead and do some detail wiring to refine the pads.

But overall, it looks great!

Nice @coh
Good work going on there so far

Personally I think you’ve got the angle of the lower branches just right. Bark has matured well in 6 years. Great density on the branches. Awesome tree!

Really nicely done, Chris.
You must log in or register to reply here.