I am hoping to get some clarification on JBP care. Also, I seem to have killed most of a branch while unwiring a larch ... is it worth keeping it and hoping, or does it just get the chop? Are there downsides to leaving it? Its a sad loss because I think that was one of the trees possible futures and was a nice branch. 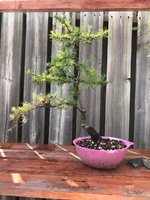 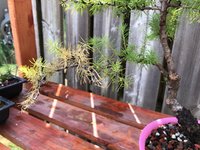 I also have two JBP that I acquired last fall, wired and potted in November. I removed the wire from them last month, but had to put the wire back on one as it didn't seem like it was holding I guess. My understanding is that needle plucking and de-candling are operations for trees that are in the refinement phase, trees that have reached desired trunk diameter. However, I am concerned the lower branches, probably the future bonsai will not survive if left alone. The lower 3 branches here did not seem to have buds at all for this year until quite late. Shouldn't the energy be balanced sooner rather than later? 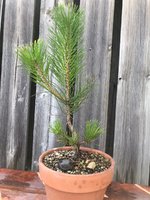 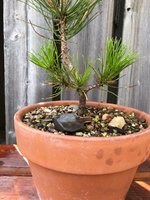 This second one has more going on and the energy is being divided up far more. I will eventually remove the bottom left branch. There are some struggling buds on this tree as well, but I am less concerned with preserving them than on the other pine. 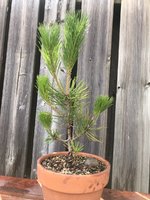 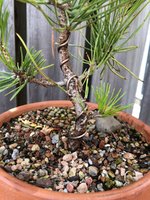 I think it'll be better without that branch.

Seems you have a new one coming too?

Those JBPs look pretty healthy to me. I wouldn’t mess with them too much. Good starter material, but it’s gonna be a few years before any real work is needed on those pines. Just keep doin what you’re doin.