I mainly have deciduous but I'm trying to change that as my Juni is getting lonely..other than the dog keeping it company lol

Looks like a nice start, but junipers prefer a nice bright white wine rather than beer.

penumbra said:
Looks like a nice start, but junipers prefer a nice bright white wine rather than beer.
Click to expand...

Sav blanc it is

I hope this one looks a little healthier next season

This picture is from when I collected it months ago I only took a little bit of foliage off to balance out the loss of some root upon collection but I still probably shouldn't have touched it.. since then a couple little pads of foliage have died could be from me touching it or could also equally be from that root 2loss upon collection.. I couldn't really intimately remove it as I was working and kind of had to be quick about it so I didn't get any Guff for tree hunting on the job lol

whats your avatar pic? a maple?

HoneyHornet said:
Yes I think I even made a thread for it to show how gangly and ugly it was when I found it and then how nice and compact it's tiny canopy became but unfortunately I lost it over winter I should have took that little guy inside I really liked it
Click to expand...

hinmo24t said:
might have been the between-the-lines i needed to keep my norway in cold garage this winter or at least in the breezeway
Click to expand...

picture of them alive was September 24th of last year according to my photo gallery and was collected in early August.. come to think of it they weren't all three at the same time but right around the general time of year but the study is one was the first of that batch and by the time it was done for that year I had a couple little branches that hardened off around the crown
And my final non Juniper comment is that you can see how well it recovered LOL say yes take that little devil inside

Just sharing my others

These are the three that I took from the Cape May point inland of the Beach..any idea of identification are they some sort of cedar

I may not always juniper, but when i do, i try to make it count 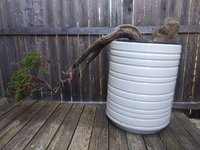 Had this tall heavy-duty pot so I just flipped a 5 gallon Nursery pots inside of it and this on top of it since I don't have anywhere to make a pedestal at the moment or anything like that and it was in the way going down the back steps
You must log in or register to reply here.