Purchased for $12, labeled as a Green Mound Dwarf Juniper

Slip potted into a 3-gallon pot with soil at an approximate ratio of 2 parts diatomaceous earth, 1 part medium pine bark, and 1 part pumice. Fed with Osmocote 14-14-14.

I moved this into a ceramic pot for better root health and a slightly taller pot to take it further off the ground. (I should have gone big for a $150 super tall pot.) Weeks layer this was lightly pruned to thin out the canopy and to reduce branching down to two forks.

I wired the trailing leader upwards as an initial step in changing this toward an informal upright form. This was an early, cautionary set of bends; later I’ll go the full route of wrapping and snapping some wood. The wire wrapped around the pot is providing an anchor that supports the upward bending.

I would change the planting angle so the leader stands up somewhat. Then poke a stake into the pot right next to the trunk. Poke it all of the way to the bottom of the pot. Then bend the leader up the rest of 5he way upright and wire it loosely to the stake. Much easier and quicker than wiring the trunk and trying to bend it. Doing this also changes the angle of the base of the trunk coming out of the ground from straight up to coming out at an angle. Gives you movement low down.

parhamr said:
This was an early, cautionary set of bends; later I’ll go the full route of wrapping and snapping some wood. The wire wrapped around the pot is providing an anchor that supports the upward bending.
Click to expand...

I agree with the slow and go process - stand it up slowly if that is your goal resting 1 year after a repotting. Looks good and healthy and it will remain so that way - nice!

I have 2 of these I got last summer and didn't really know what to do with them... one I cut back a bit the other I didn't do any thing...

My question is that if I wanted to turn it into an up right all I need to do is slowly start bending the leader branch up and maby tilt the position it's planted?

@Nwaite generally, yes. Please read up on techniques to figure out how to do that.

Hey thanks for the links.

Good luck on the tree!
Can't wait to see an update.

This size of juniper I crank up at one time. They actually take bending when they are small. And like I said,if you repot so the trunk is at an angle it's already pointing up a little.
Started out with a 1/2"trunk 3 years ago. No quite 1" and about 20 " tall. Can't see the trunk for the foliage but it was a one gallon plant.

The tree was wanting to be a semi cascade so I decided to stop fighting it. I'll get more nursery stock if I want an upright procumbens. 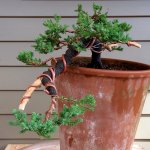 It still needs a fair amount of work and development. That'll come in later years. I’ll aim to tilt it 30 degrees counterclockwise in its next repotting.
Last edited: Oct 25, 2016

Why fight it? I agree. And it's looking good and healthy too.

That is a cute Ass little tree.
Minus Big honking Ass jin.

You seem to be able to keep it alive that small.
Says do it.

Cut that SC tail off and build that little park tree.

The lowest foliage died from a harsh winter and the aggressive styling I did last fall.

The remaining foliage makes this a low, squat tree. It is no longer a cascade.

Well, okay, this is still a semi cascade.

That filled in nicely

Oh! This tree has its own thread.

The deadwood needs work. The tree will greatly benefit from wire this fall.