I really had no intentions of getting anymore trees but a friend invited me to his house to give him some advice on some he had recently bought. After seeing what he had I just had to have a few so he sold me two. Below are the before and after pics of the styling I did on them. Pay no attention to the pots they are now in since I didn't have anything suitable at the last minute. The trees will stay in these pots now until next repotting and by then I will have had plenty of time to get the perfect pots.

I had intended to make at least one of these a cascade but after looking closer I saw something better than that in each of these. I really dislike when people especially beginners see a juniper with a long whip and think they have found the ultimate cascade, and most yet when they leave both whips hanging and the tree looks like a Mohawk haircut, a new bonsai design I guess. :-(
Note: Not sure why that last pic is coming up, can't see how to delete it. 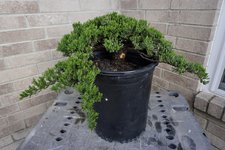 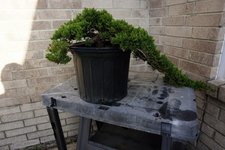 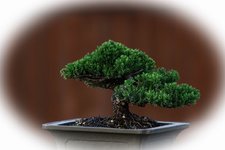 Could these also be classified as prunings? Did you put any wire on them?

bwaynef said:
Could these also be classified as prunings? Did you put any wire on them?
Click to expand...

No no wire, just removed unwanted branches for the design.
You must log in or register to reply here.