Keeping a sacrificial branch for the winter or cut now?

Good morning all! I have a wisteria bonsai (chinese, gonna be gorgeous and flowering either this coming year or next) that I'm training to be a semi cascade eventually. I'm brand new to bonsai, and this was actually my first tree purchase early this year! I bought it right before Texas got hit with Ice Storm Uri actually, haha, and they kept trying to deliver it to the completely iced over mailbox, which... is hilarious to me. Anyway! I had been reading and watching Herons Bonsai (love him) on how to thicken Wisteria trunks, and to train them up, as it can be a long process, and how they're quite wild during their growing period and it's important to keep them in check but also to allow them to branch so that the trunk thickens as well. My question is this:

I established a sacrificial branch on a larch as I had done so with one of my Japanese Maples-before chopping that off when I realized it was at the same height of another, eventually more appealing branch-and it has actually fattened up the base of the trunk quite nice. But, I'm now reading about how you don't want to disturb the vascular system of the tree between the leader and branches you actually want too much, and having this sacrificial branch at the base could end up doing that in the long run (as well as causing a knot, which, Wisteria are known for looking gnarly, so I'm okay with this, but wanted opinions).

TLR should I cut this branch now to save the vascular system and potential knotting, or should I leave it and have it help to thicken it some more for another year? I know it doesn't look like much, but the tree is planted deeper than in the first attempt picture as the root ball wasn't covered as deeply, because again, I was utterly new to trees lmao. 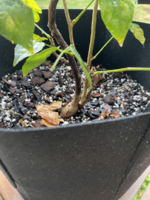 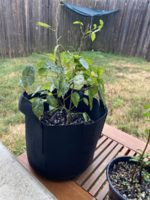 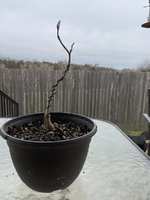 I'll attach a picture of when I first got it to show the growth in the last about... ten months or so. (please ignore my awful attempt at wiring, it was my first time)

There seems to be some question on that and it seems to be preference - I'm interested to hear how people chime in.

Andrew Robson seems to indicate that cutting leaders now helps strengthen the branching below for the coming winter, but I suspect in this instance you want to cut nitrogen in your feeding to avoid a a flush

I opted for the latter this year mainly because I'm a newbie who saw an excuse to play with his trees, but next year when I'm trying to be more strict I'm thinking I won't and will use it in the spring to kick off that first flush of growth in the year.

I'm no expert but I don't prune in late Autumn. Something about having open wound in the winter doesn't feel right to me.
That said, your wisteria is very small. Let it grow. I have one a little bit bigger than yours and I cut practically nothing. For deciduous or pine I've read a lot from here about selective pruning to force the trunk to grow etc.. However, for vine, I see the best way to get the vine grow big is to let everything grow and create demand on the roots. That means the nutrition highway has to grow quick to accommodate the traffic.

I advocate for only pruning before growth in spring and fall, everything out of that natural rhythm wreaks havoc on both hort and design.

There is a time in fall where you should be aware of new growth. I'm beyond that time. But still, I would only cut large branches off now that won't spur but maybe some good want to bud lower in spring.

I believe your swelling from leaving it will be better aesthetically than the results of a new wound left over winter and the subsequent healing.

Leave it cuz if a varmint chews one off through winter, you still have another.

sorce said:
I advocate for only pruning before growth in spring and fall, everything out of that natural rhythm wreaks havoc on both hort and design.

There is a time in fall where you should be aware of new growth. I'm beyond that time. But still, I would only cut large branches off now that won't spur but maybe some good want to bud lower in spring.

I believe your swelling from leaving it will be better aesthetically than the results of a new wound left over winter and the subsequent healing.

Leave it cuz if a varmint chews one off through winter, you still have another.

Cool beans! Thanks so much! I do believe you're also the person that replied to me about the rust that was on my willows a while back, so thanks a lot for saving the rest of my bonsai (which now includes two quinces).

I'll leave it in that case. I was inclined to leave it, but wanted to reach out to folks that would know better just in case. Herons also talked about leaving them on until you get the desired effect, but then I read on some facebook pages, and got confused haha, but I always say that this forum and youtube videos are probably better sources of info (and books tbh).

alivation said:
TLR should I cut this branch now to save the vascular system and potential knotting
Click to expand...

I am not sure what you mean here. How would cutting save the vascular system?
If anything, leaving it will get the tree stronger.

If you are after taper: Have you considered clipping the old branch, instead of the sacrifice?

It could be Bonsai that made me so aware of this simple, "cause and effect".

We've banned the G word, whatever, words are always only as powerful as the strength we give them.

Our actions though, always have effects.

Growing seasons around the world vary widely and it is difficult to get a perspective on what someone says when we don't know where in the world they are. If you go to the upper right hand corner and click on your Icon, you can add your location and people will be able to customize advice for you, and you might connect with another local.

You will need to have patience for flowering.

alivation said:
(please ignore my awful attempt at wiring, it was my first time)
Click to expand...

Astounding. Could have been worse. Unless just wanting big base would suggest growing one farther up and remove both these during dormancy. Sacrifices generally allowed to grow at least a couple years then cut and grow new one to develop some taper in trunk. 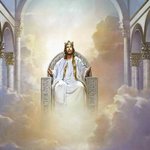 (1) I try to avoid doing any work on deciduous as they are shutting down for fall. If you want to prune, wait until after the leaves fully drop, but prior to deep winter. Otherwise wait for spring. There may be some special nuances specific to wisteria and whether or not you want it to flower the following year, but generally speaking if you prune too early in the fall you may trigger the plant into trying to push new buds just as it should be dropping leaves. In SoCal I could do this with Chinese elm and cause the tree to skip fall entirely - and push new growth that would last through the winter. But we didn't have freezing temps.