This is a progression post for my Lacebark pine. Here is a brief history up until now:

Purchased 2008
Repotted from 3 gallon in nursery soil to bonsai mix 2009
All branches shortened close to trunk Spring 2010
Tree given to friend from Fall 2009 to Winter 2012 (shoved in ground and neglected)
-Deer fully defoliated at least once
Back into bonsai mix 2013 in 3 gal nursery pot (Akadama, lava, and pumice)
Start styling work Fall 2016

The dense canopy has prevented exfoliation until this year. In my opinion, this is one of the coolest species of pine not commonly used for bonsai. The species is incredibly resilient, can produce short needles, back buds, is tolerant of root stress, etc. Those are ideal qualities to me. I've seen about 10 trained as bonsai in America thus far, and bet there are many more out there.

The art formed, large, Pinus bungeana 'Silver Ghost' in my front yard has been the subject of unscientific experiments. I've cut branches back to nubs and had buds pop on bare branches. Other branches decandled with varied regrowth of buds.

The tree for this thread is not currently a show-stopper, but can definitely be made into something nice in the coming years.

I acquired this one from a garden center and opened up the canopy to see if it sped up exfoliation. Again, as a not so scientific experiment, the results seem promising as there was very little exfoliation last year. This tree will not be a bonsai long-term, but will try air layers eventually to see what happens.

Almost kind of looks like a sycamore type of bark.
Pretty cool actually.
Is it 3 needles per fascile ?

M. Frary said:
Is it 3 needles per fascile
Click to expand...

Yes.
And the needles are very straight.

That is great news that it back buds on bare wood. I have maybe 10 seedlings that just finished their 3rd summer, still pretty small, but picking up speed.

Because ''the books'' put them in the Strobus sub-genus of Pinus, I had assumed they would be strictly a single flush pine and reluctant to back bud. I had also expected them to have 5 needles. Glad I'm wrong on the first two counts, too bad their needles are not the glaucous blue of many of the white pine species. I do love the bark, can't wait until mine are developed more. Right now mine are stll unbranched whips, maybe 1/4 inch in diameter and 6 to 10 inches tall.

Good news, at least for seedlings in an Anderson flat, they survived a few nights of -17 F, by simply being under my bench and under 4 or so inches of snow. Minimal protection in USDA Zone 5b. Don't know if this level of hardiness will persist when older and in a bonsai pot, but so far, so good.

Thank you for sharing your observations, now I am more excited about this species, at first I was skeptical as mature landscape specimens seemed to have an open habit, with more distance between needle bundles and long internodes, but your photos show fairly tight needle spacing and back budding will cure the long internode issue. I am a little disappointed mine are not fast growers. They are maybe 1/4 the size of the Pinus rigida seedlings I started the same year.
O

All photos from last week.

First photo is after I thinned some branches with three shoots down to two (I did not decandle earlier last year).

Second is a sample of needle sizes. I've seen needles as long as 5" on trees in gardens.

Third pic is after needle thinning; most three and some two year old needles.

Forth pic is after wiring with aluminum. This is the first styling (if you don't count occasional pruning), so I focused on opening up specific areas to more light and encourage exfoliation on trunk and primary branches.

This tree will have major root work done this Spring, then potted into an oversized mica pot. Final planting angle will be different than now, so for now runners will thicken trunk. Right side will be rebooted in 2-3 years. 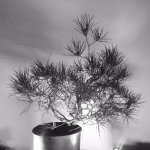 Nice progression and work on a unique species Owen. Thanks for sharing and stepping out on a limb with a not so common Bonsai subject. I look forward to the continued updates on this tree.

M. Frary said:
Almost kind of looks like a sycamore type of bark.
Pretty cool actually.
Is it 3 needles per fascile ?
Click to expand...

I believe it is what is called an exfoliating bark. Very interesting. It appears to back bud fairly well. I would be curious to see if the tree develops any kind of interesting bark.

Vance Wood said:
I believe it is what is called an exfoliating bark. Very interesting. It appears to back bud fairly well. I would be curious to see if the tree develops any kind of interesting bark.
Click to expand...

I'd like to try one just for the budding factor. I wonder how cold hardy it is?

10 years old before the bark starts to exfoliate. Longer for it to turn all white. Zones 4 to 8.
I just Googled it Vance.

M. Frary said:
10 years old before the bark starts to exfoliate. Longer for it to turn all white. Zones 4 to 8.
I just Googled it Vance.
Click to expand...

So the bark turns white like a Birch? Wow! that's interesting.

That's what it said.
O

The oldest ones I've seen in person are at the Brooklyn Botanical Garden and Morton Arboretum at Harvard (the latter likely the oldest in America). Bark was white with more vibrant, small metallic patches. There are some photos online of the "nine dragon pine" or something to that effect. A famous lacebark pine in China.

Cool. You don't see these too often. I ordered some seeds from Italy but they where confiscated.
O

Here's a quick photo I took on the way out the door. Next year, fertilizer program will me more aggressive and the baby adventitious buds will fill in nicely.

The species has a tendency to "run" on the new growth, so I'm using a slow and steady approach.

My seedlings are slow, but steady. Repotted this year into individual pots.

Keep us posted on your trees. Thanks

Here’s an update for the thread. Repotted the tree yesterday after two years in a relatively small bonsai pot. My goal was to slow the tree down a little. Mycorrhizae filled much of the root ball, and the roots looked good.