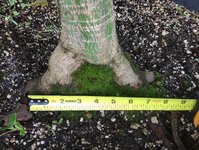 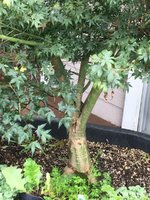 These are pictures of the Maple large bonsai I am working on. please send comments

looking good! What is your vision for the final tree?
R

I think you need to put it in a bonsai substrate and work aggressively on nebari improvement. A shallow box might be helpful instead of a plastic nursery pot, though a larger diameter one cut down would be okay. Either way, you need to repot every spring, combing out the roots radially and pruning them back (about and inch smaller radius), especially the big heavy ones. It is a much safer strategy that 'ground layering it'. The key is to develop those fine roots close to the trunk which is what root pruning will cause - the more your tree has of those, the more aggressive you can be with cutting back those big ones each repot.

Your tree has lots of close nodes low on the trunk. It may not matter, but if you want lower branches, there is a good chance of getting buds to pop just about anywhere you might want them. If it doesn't work, thread grafting is always possible. I'm just saying that your tree could likely be made into a powerful little sumo broom, if you want. It doesn't have to be, though.

I don't think you want that stem inside the low crotch. It is a problem IMHO and likely to present some difficulties in eliminating.it. IOW, think twice about it before you act. The tree's branches are straight and taperless. I think you likely will need to cut them back and grow ones with more movement and taper. A little wire on young stems is the easy way to affect movement you want. As for producing taper, the branch below won't thicken much until the stem from it is nearly as thick.

The final thought I have for you is that roots grow according to the amount of carbohydrate and auxin coming down the tree above them --> keep the canopy balanced around the tree, to make the nicest nebari.

It is a long journey to get to what you may aspire to make. You've got the trunk = that is about half of the development time. Make a 5 year plan and begin executing it next spring. Then, just as in business, modify your 5 year plan in response to what reality is giving you.

And last, but most importantly, have fun with it.