A few weeks ago I was at a befriended bonsai growers' field. I saw 2 pseudocydonia's in a corner that suffered lots of dead branches. So even though I have wanted one for a bit, I was not willing to get these at full price. However, as I was leaving, he told me those 2 were probably no good anymore, having been dug up and planted in pots just before the -15c cold that we had last winter. That is what caused the die-back. We discussed prices getting a decent offer for the state of these trees, and I said I would think it over and get back to him in spring.

A few days ago a friend of mine went back to the grower, and I asked him to collect the two quinces. On Tuesday I got them and yesterday I cleaned them up. Both pots were covered in liverworth and old peeling bark, which I proceeded to clean off. Then I trimmed off all branches that were clearly dead. Hiding under the dead bark were some critters that made me happy that I got them now: Munching away at the living bark were several larvea.

A left-right comparison of the two, before and after initial cleanup.. 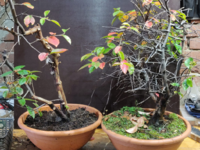 The one on the right was treated as the one on the left. As it looked pretty healthy (WAY less dead branches, and lots of white roots in the moss) I decdided to look at the rootball. This plant was potted in soaking wet substrate, which for me is an indication of the real problems these plants faced early spring. So I proceeded with a quick repot: 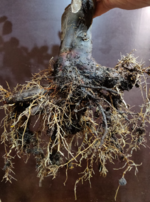 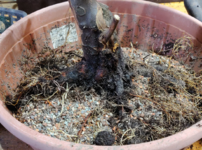 Is it now in he greenhouse, protected from random frost and, more importantly, wind. Once we get to real winter weather I will make a call whether they go into a shed or stay outside. But for now, the added warmth will help settling in.

Chinese Quince is a great bonsai subject, although they aren’t the fastest growers. I would not allow the roots to freeze this winter if you did all that root work. They start growing very early in the spring; when it is above 45f, they will bud. I suspect the best chances of survival after November root pruning would be to keep them in the greenhouse and allow them to start growing as soon as they’re inclined. Mine is prone to aphids in spring and rust in early summer.
You must log in or register to reply here.