The Lemon Cypress has been one of the few trees I've really just piled on since getting back in to the hobby around 2016.
For a while, I was living in a condo, so keeping local species wasn't really in the cards. In the mean while, I decided I would make a go at styling one of these, and see how far I could take it with whatever conditions I could give it... (in a condo with no balcony access, and north-easterly aspect on the Northern Hemisphere, not ideal, by any means)./

I bought it cheap on a whim in December of - I think I spent maybe CA$9? I did some simple cleaning up and very loose wiring, attempting to avoid any major damage to branches that were still unlignified. It also got put in a colander pretty quickly. I want to say this is probably a pumice/DE/fir bark mix? 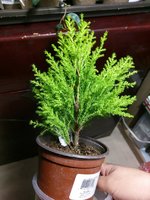 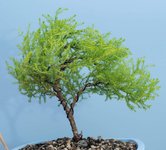 It lived under north-easterly window and grow lights for a while - at least 9 months? It also got rewired a bunch of times and bounced back from all of it rather quickly (which shouldn't have been a surprise given its rate of growth and strong apical habit). This continued until at least October 2018. Wire, wait a few months, de-wire, repeat. 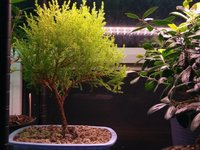 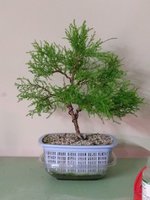 By October of 2018, I had moved to my current living situation, which is a detached home with small backyard. While I felt there wasn't a lot of progress overall, it did certainly seem like the trunk had grown significantly (even though I have never found the roots incredibly vigorous when I repot). This species bounces back and grows strongly upward at the slightest opportunity. Which is just as well, because my early wiring was really terrible and I'm still learning now. The tree got a repot near the end of spring that year, and it's been in a slightly bigger basket ever since. 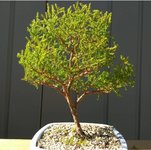 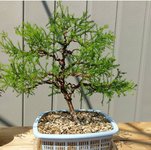 I think I've seen the biggest gains this past year. Here is a shot from May of 2020. Over the previous fall and winter, it really seemed like my pinching and pruning really forced it to grow a lot more densely and strongly. 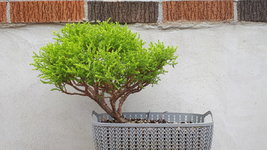 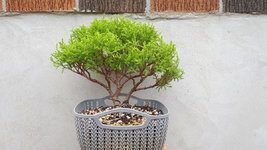 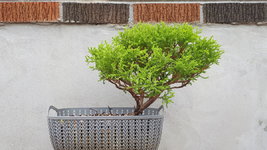 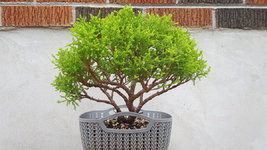 It's funny how you can tend to a tree every day and feel like it's not making any progress... yet compare pictures between even just two months and just be bowled over by how vigorous it has actually been... 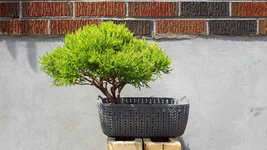 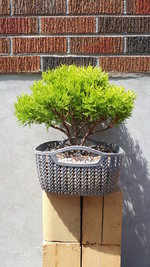 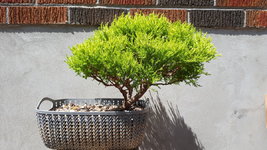 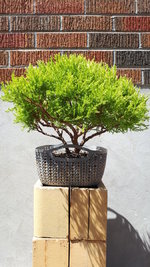 This is more or less where I left it by fall of last year - I did some foliar reductions and wiring just prior to bringing it in to overwinter, but still ended up with just about the same profile by spring. 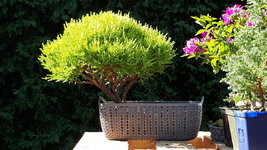 Today, I spent a few hours dewiring and rewiring, plus doing some spring foliar reductions, trying to reestablish some pads and make some room for lower growth to backbud. My wiring to this stage has mostly just to pull branches down and help with light exposure. I haven't settled on a front yet, although the pic directly below is probably the strongest contender. I am not sure, but I think I may upgrade it to an actual pot next year? We'll see. Trunk width is now easily 3-4 times as wide as when I got it. 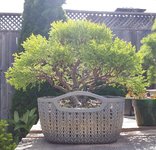 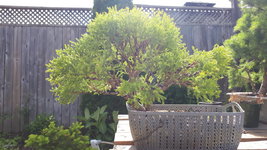 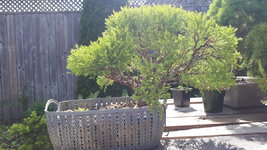 Really nice growth, the trunk its getting thick, I like the naturalistic style

Each time I go to Home Depot I see those and wonder if anything could be done with them. Nice job!
You must log in or register to reply here.