I recently jumped back into Bonsai (Bonsai-ing ?). With a new passion.
It started with a nice Gengsing graft Ficus Retusa from Lowes (Costa Farms) that was lingering on a mobile plant stand getting ready to be displayed somewhere. Oddly they "don't" carry Bonsais in stock in the Kansas Lowes - just direct ship. They had four and I got the best of the bunch. I never payed anything so high for any plant - even bonsai. It was $57. Of course my wonderful had that "what now ?" look but was encouraging. Even though she just does not do plants Kills everything she ever gets from the kids on Mother's day etc. Gee Grandma i- did you ever water it???

Well this bonsai took off like a race horse at the Churchill Downs. It was putting out new leaves almost every day. So I got some other bonsais thru Lowes direct and Amazon. For the most part I have been real lucky. Only bad experience was a two for one on Satsuki Azaleas. When they arrived one was doing real good. The other was sick and a lot smaller than the other. Within the first 10 days - it quit growing buds while the other was fine. Thankfully Amazon adjusted my purchase price.

One of the other Bonsai I wanted to start with was the Fukien Tea. I got a nice one thru Brussels/Amazon that was the 6 year 6" to 10". When I got it it was a full 10" - healthy - beautiful - and those great shiny leaves. It looked just like the promotion photo on the Amazon website with a nice trunk shape and great pre pruning. Beautiful leaves.
Very happy.

While moving some things on our bookcase wall (old house - 135 yr) I glance up at the top shelf where my wife stores (hides) her "bric a brack".

Here is a upright white vase with beautiful bas relief of flowers on a tree on all four sides. Hand painted. Showing branches twisted like a dream bonsai. She doesn't even remember where she got it. There was a receipt for some kind of hardware purchase in Ohio back in 1986. So it has been around since then when we lived near Cleveland 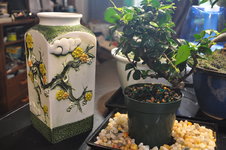 anyway. We live in Kansas now.

So my brain went into "pot it" mode. And I ordered another Fukien Tea (Amazon/Brussels) hoping to get a tall specimen that would fit into the pot and have a vertical branch to the side - just like the other. It was cheaper as it was for a plastic grower pot. I did not want to chance messing up the first one if I could not get it into the decorative pot without harming it. side and then droopsAnd the first already had the nice porcelain pot.

Well Fukien # 2 arrived Wednesday. It barely made a 6" height. The trunk was around 5 1/2 tall. It was a dense with foliage. Hard to figure out what to do with all the leaves.... I have not done any pruning while acclimating the new trees.

I got a LEMON - just after expecting this stand up straight Fukien with a lateral bend half was on the trunk like # 1. My plan was shot.

A day later it started to throw flowers. #1 Fukien has yet to show one.

Then it struck me - is does not have to be vertical. It has an immediate bend to the side and then droops down. Just maybe I can make it work. A lateral Cascade?

Now I have to decide what the "front is". It may be on one of the corners so the two sides will show?

I am going to need a lot of advice on pruning. Hope long should I wait until after this potting today?

Thanks for sharing. I'm having a LOT OF FUN!!! 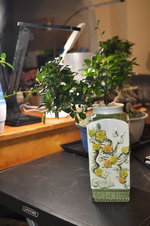 If it does manage survival in there, you may have a helluva time getting it back out. Then you may have to decide between the tree and the vase. In that position I'd pick the vase, but I'd rather you prevent it in the first place, which kinda leaves you pickling the lemon juice.

It's a nice vase, but unfortunately without a drainage hole that Fukien won't survive for long. I recommend finding something else...

I agree with both above, it will be impossible to take the tree out once roots has grown for couple of years and no drainage hole=death for most of the trees.
If you really want to use it, i would find quite deep pot that will fit into the opening on the top and plant the tree in it, that way you can control the watering etc
P

Much agreement with above negative comments. First MUST drill holes in vase bottom. Then will have problem of getting tree out of vase for repotting. Then is problem of narrow neck soil likely to stay wet and hard to check moisture with narrow opening. Please save interesting vase, develop tree to have decent trunk in growing container then in some years find real Bonsai pot for it. Nice idea but slightly off base.
P

Potawatomi13 said:
Much agreement with above negative comments.
Click to expand...

I believe they were positive comments about a negative situation.

https://en.wikipedia.org/wiki/County_Donegal Irish County of donegal it think the crest is

Potawatomi13 said:
Much agreement with above negative comments. First MUST drill holes in vase bottom. Then will have problem of getting tree out of vase for repotting. Then is problem of narrow neck soil likely to stay wet and hard to check moisture with narrow opening. Please save interesting vase, develop tree to have decent trunk in growing container then in some years find real Bonsai pot for it. Nice idea but slightly off base.
Click to expand...

Yes I realize the gamble I am taking. My wife loved the pot - at least I am going to give it a try for her added interest if nothing else..

But I thank you all for that observation . I kind of expected controversy.

Yes - drilling hole. Need to get a correct style bit that will not crack it today - ceramic type that will not have too aggressive of a bit face. Going to take some time with a Dremel tool to reduce heat and vibration that may stress the bottom. Another gamble.

I planted starting with a lower layer of large stones - about two inches. Next a layer of sphagnum moss. Leaving about 3 1/2 for the potting soil with plenty of space for the tree. was able to manipulate the soil mass to get it into the neck and then backfilled. I did not have to cut any of the existing roots. There were only two large main roots. The others were the fine type. I left them alone so there is hopefully less shock.
I added perlite to the soil from the growers pot and added more soil mix to lift the plant above the neck. The lateral trunk line is just above that height allowing the beginning of a cascade.

The "HoldAll" meter I am using does not list the Carmona/Fukien on the moisture list on the card. Anyone able to give me an idea of level number to target? (Like 6 for Ficus ? - I'm sure Carmona is different)
The probes fit perfectly into the pot without disturbing the trunk for now.

Thanks again for your observations. You were all very nice about it. It will be a real learning experience. Next challenge is to prune to expose the trunk line better.

Irish Gaelic. My mother was a Doyle. Her ancestors lived around Counties Carlow and Waterford and Wicklow.
The "Clan Badge" was designed by a modern Doyle - I believe from Australia. it reads "Clann O' dubh Ghaill -meaning Dark Foreigners. Changed to Doyle for pronunciation I guess.
They were part of the Viking (raider parties) largely from Denmark - the closest by boat. They had darker hair I think.
Dubh meaning dark or black is also how the city of Dublin was named - settled by Vikings next to a dark pool of water. Also the Blackbird is named Lon Dubh in Irish Gaelic.
This is at least the info I have been able to trace.

I see you moniker is Potawatomi. I live in central Kansas (Abilene) but there is a beautiful Potawatomi reservation in Mayetta Kansas. Used to go there to hunt Quail. I don't anymore - don't want to kill anything anymore. Still beautiful I hear.

No pardoning necessary. Irish heritage - ancestry is a very broad and difficult subject to understand. Doyle was a very common name for instance.
Birth Certificates (Baptisim) were hidden in the Catholic churches away from the English. Hard to properly trace ancestors.
You must log in or register to reply here.