Desmodium unifoliatium: also known as blue bell, tick weed, begger's lice...ok, the last two are more for the desmodium species that are truly weeds. Unifoliatium can at least gain some thickness and eventually look like a tree! Maybe the others can too? I'd love an orange variety if so

I bought 4 of these last fall. 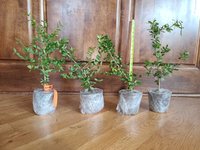 They even came with some bonus seed! 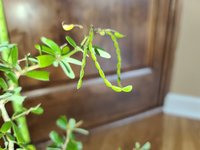 I did not try to plant the seed. In fact, as soon as I saw the seed I about went into convulsions! At the time I did NOT realize what desmodium meant! I spent most of my childhood with socks that looked like this:

which is where the common names "tick weed" and "begger's lice" come from!

But the flowers are so cute and well scaled for bonsai and purple!

Which is what sold me...purple...smells like "grapes and large thorns". I wasn't sure what "large thorns" smelled like, but a few weeks later, I learned! 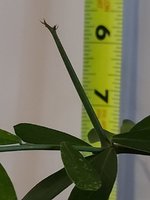 I still don't know what a large thorn smells like...but any thorn large enough to have it's own thorns deserves some respect! The first round of new growth since I purchased these guys was full of 3" thorns! 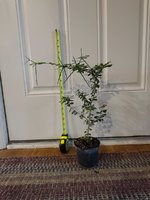 I've never intentionally grown this flavor of weed before...which is why I got 4 of them...to play

I immediately transplanted one into a small pot. It died after a few months. I had to butcher to roots to get it to fit into the pot. I don't have any pictures of that process

Another one I chopped...but not a harsh chop. That one is back budding nicely now. Sorry...not good before pictures But here it is today. All that low trunk growth is new. 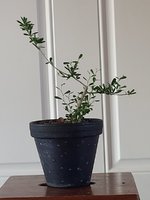 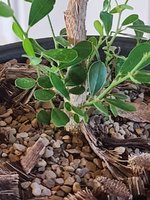 The 3rd I put into a 3 gallon grow bag to see if that would speed growth. 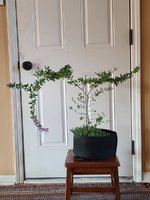 It's too early to tell if the large bag will speed the growth of the desmodium...but it has certainly done wonders for that sedum! I received a "freebie" spring of sedum about the size of my thump in a pot order about the same time I potted this into the bag...late October 2020. I chucked it into this pot thinking it would get a little water now and then while I figured out what to do with it. The sedum has since filled in most of the pot!

The forth one was turned over to the care of my daughter because she wanted something non-succulent to care for. She put it in a slightly nicer but only slightly larger pot than it came in...and it has since fallen back into mostly my care. 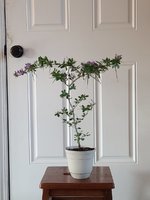 And that's where we are today! I've done a poor job documenting their care...I'm hoping having a thread now will fix that. I've had them less than a year now...they sat under lights all winter. They sit in full sun dawn til ~2PM on my deck now. Other than a first repot out of the nursery soil...and a chop on one to experiment...no work has been done on them yet.

The do have pretty purple flowers though 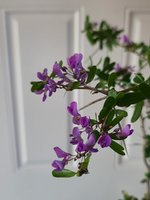 In a more serious tone:

If anyone has experience with these, I'd love to hear it! I worry that they might grow viney for a number of years before they ever start to thicken. I'm not convinced the normal "grow a long sacrifice branch" is the way to go to thicken them. I could be wrong...but the natives I'm used to mostly grow long, ground hugging vine-like branches. So far, these seem to grow somewhat similar. I'm wondering if, instead, they need lots of branches to thicken?

If anyone has experience, tips, tricks, examples of theirs, please post! Thank you

Potted up my Desmodium today I got from Wigerts ($25 + shipping). Creating Penjing is my thing. I did prune her back hard then wired her. She was potted into Wigerts premium bonsai soil.
Also use Wigerts 6 month slow release bonsai fertilizer (24-5-10). I feel save to still pot her up now since we still have about 3 - 3 1/2 month of growing season left. She will stay outside even in Winter and only come in if we get a frost warning.

This is after. The rocks are only there to keep the Tree stable, once rooted in I will remove them

bonsai418 said:
This is after. The rocks are only there to keep the Tree stable, once rooted in I will remove them
Click to expand...

I love the turkey and the little vegetable garden

We're hoping to move closer to grandkids next spring. I'm looking forward to hiding a fairy garden in the landscape for them! I've been looking at tiny houses and accessories lately!

I have a quercus subor 3 tree "forest" that I just made a wooden bench for. I recently put in a path and planted a couple different kinds of thyme for groundcover and small bushes along a path. Not nearly as cool as what you have there though! I haven't put a lot of time into it yet...just starting to think through and feel out where I might want it to go. I know there's some terra-scapping I want done before I get too "permanent". I also need my ground cover to thicken up enough that I can break it apart and spread it around a little more naturally.

Anyway, I do really enjoy Penjing...thanks for sharing yours @bonsai418
You must log in or register to reply here.