Beginning a progression thread for my first JWP. Forgot to take a picture before starting to work on it. It was straight and basically Christmas-tree-shaped when bought from the nursery.

After some branch selection, wiring, and first bending: 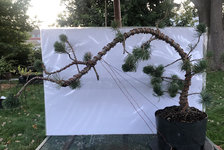 After working on that bend a bit more and adjusting the positions of the branches today: 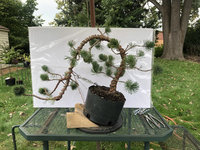 What is the vision for final design here?
you may wish to get some more wiggle in the lowest 5-6 branches As they appear relatively straight from the pics.
L

Nybonsai12 said:
What is the vision for final design here?
you may wish to get some more wiggle in the lowest 5-6 branches As they appear relatively straight from the pics.
Click to expand...

I don't truly have an overarching vision for it. I tend to be more of a "make individual decisions in the moment and build upon them little by little until a structural pattern begins to emerge and I eventually 'see it'" sort of artist. I agree with your assessment that those lower branches are too straight. I thought that I had put some bends in them, but it's possible that I missed or the bends are perpendicular to the plane of the photo or that I bumped them while doing the bend or didn't use thick enough wire and they sprung back to being straight when I wasn't looking. Will have to take a second look.

The closest thing I have to a design plan at the moment is the intention to put a bit of curvature in the trunk while it's still flexible enough to do it. Right now, of course, with the guy wires I can only pull it toward itself. The trunk still all exists in one plane. I'd like to put a bit of a twist in it at some point, but that will have to wait a bit. My priority is to repot it in the spring to get it out of that nursery soil and into bonsai substrate. Once it's been repotted and had a chance to establish itself well, recover, and push new growth, then I will place some rebar in the soil/rootball off-axis relative to the trunk's current plane and do additional bending to give the trunk more 3D curvature. At some point in the future, I will likely try to air layer some of the top off of it to propagate as well as add some more dramatic twists and turns to the trunk line and, in the proces, develop more taper. That's about as far into the future as I can see from my current vantage point.
L

I changed my mind and decided to proceed with adding some lateral twisting to the trunk now. 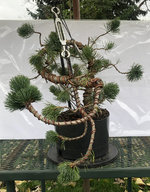 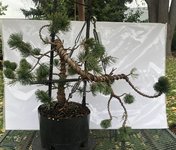