Hi folks,
Inspired by my small tree efforts, my wife bought herself a small chinese elm (my assumption based on the leaves?) bonsai at a local mall, which very quickly succumbed to what turned out to be a bad case of root rot.
The bonsai itself had a decent trunk, but was ended with a club like end - the sort of thing you'd get by pruning repeatedly in the same location. I carefully cut into the bark in a few locations, found the top to be completely dead, and decided to just cut/break it all off, with the idea of figuring it out later - could be an interesting carving project somewhere down the line. Tracking down along the trunk I did find what seems to be a live vein - a lot of the bottom part of the tree is dead, but there are areas where scoring the bark shows living green underneath. So I completely bare rooted the poor thing, cut out the mushy roots and then pruned some, repotted it into a completely anorganic mix and set it into my "hospital", which is what I call my plastic sheeting box I use to maintain humidity for seeds, seedlings and weaker trees.
A couple weeks later I started fertilizing and within another week the little survivor has sprouted new growth. Now my worry is that it all seems to be coming out of the same spot on the trunk, at the base of where an old branch used to be. I had hoped to get at least some budding in the places where I previously scarred the cambium when looking for the live vein, but that did not happen.
Any thoughts, ideas or recommendations, please? 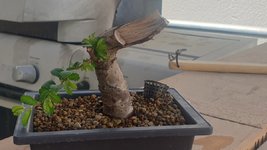 Leave it alone to grow for a year. It needs to build strength.

I like a good resurrection! Yes it needs to recover, but then if it does only sprout from where it has then you have two usable limbs to make a tree from. Lots of people use the fakery of a tree dying back to account for a large chop. Well, yours really did so capture that and use what it gives you in recovery to tell the story of the tree.
S

you are correct with the ID. Almost certainly a Chinese elm which is great because they are tough and can recover well

Most trees will activate the easiest buds first to stay alive. The ones located at branch collars are quicker to grow than those deeper in old bark so they usually activate quickest. There is still a possibility of some more from the trunk but the tree may be satisfied it has enough now.
Chinese elms can also produce buds from exposed cambium. When we chop a trunk we often get a whole ring of new buds and shoots around the cut. I can only assume you did not cut back to live cambium when you chopped this one.

Given the tree was close to death I would be happy with this result. It will take time to rebuild branches and trunk but it can be done. Keep 2 of the new shoots. 1 will become the extension of the trunk. The other will be a branch. Remove others to prevent over thickening. A larger container would allow more quicker growth but you can develop a good bonsai in a small pot. It just takes more time.

I think it's great that you inspired her to get a tree!

Thanks everyone for those positive replies and advice!


Shibui said:
I can only assume you did not cut back to live cambium when you chopped this one.
Click to expand...

That's right. Intentionally - I was worried at the time that introducing a wound to the live part would weaken it even further.

In retrospect I wish I potted it in a larger nursery pot, but it was a quick emergency job so I just went with what I had at hand at the time.

I've removed the third sprout and will now give the little trooper some TLC and rest - here's hoping he survives the summer. Should I move him indoors for those hot & humid months we're about to get? All the rest I have are tropicals and those survive alright (as in, they generally get stressed but survive), but never tried an elm in this heat!

Pff. Now that is a question. I wrote some advice, but I am not really one to offer it for your location so I have rescinded most of it. You may want to look up grow tents and fans, if you’re really keen, though your hospital seems to be doing well for it. How that will play out longer term, time will tell because although these are famously sold as indoor trees, that they are not.
S

I cannot see why Chinese elm should not manage outside in your summer. I know that they leave them outside all year round in Queensland which is tropical heat and humidity in summer. Possibly some shade if it gets hot and dry so the pots does not dry out but hot and humid should be OK provided you manage watering properly.
A 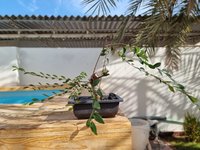 Look at this little trooper!

He survived the summer but got maybe a little too lanky on the top in the process. There's also a small bud about halfway down the trunk now.

I was away for a couple months and the person looking after my garden was a little careless with water pressure so looks like a lot of the soil got displaced from the top. I am planning on just top dressing it and wait another year or so to repot and check on the root situation. 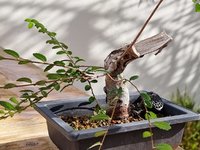 Looking good. I think if you do not wire that leader for movement now, you may miss the opportunity to do so over the next growing season.
You must log in or register to reply here.

What do you do with mallsai gifts?