I am sort of new to bonsai - well, not really since I have managed to kill off two specimens of Fukien Tea in the past. After these two embarrassing encounters I gave it up for a good while. A few years back I rescued a maple from the garden since ol' mother-in-law wanted to get rid of it ("weeds, pfah!"). Not knowing anything at all about yama- or yardadori, I just took a spade and dug it up while in-leaf, on the insistence of my wife. Potted it in a plastic pot and let it sit outside. After two years, it started going southwards, getting issues with the leaves. getting potbound, moss and weeds growing in there.

Still not knowing what I was doing, last autumn I took it out of the pot, cleaned the soil off, did some root pruning (as much as I dared) and put it into a new pot (too small), and cut the leader (don't know what I was thinking, actually). This spring I realized that it wouldn't better off sitting in a too-small pot, so replanted it while still dormant into something a bit larger.

In beforehand, it should be noted - I know this is never going to be a top notch bonsai to swoon over. But I would like to get a few pointers on how to make it at least a bit better. I am thinking going for a slender tree, 50-60 cm. I would need to thicken the trunk a bit (no need for a Bronco bonsai trunk), and I am not sure of the branch going upwards left - should I keep it? Get rid of some of the larger leaves or just leave it to grow as it is?

A few more photos ... from above, back and a closer view of the main upper trunk.

I do not belive that to be campestre field maple

At any rate a good season of unimpeded growth will be beneficial.......perhaps regular topping after strong growth to a basic triangle will build density and girth .....and proceed next season with branch selection if not concerned of size

Yes for a start it is a sycamore, acer pseudoplatanus, not a field maple. Not a species regarded as suitable for bonsai because of its large leaf size, but a nice species nonetheless. They make big, imposing trees when mature.

if you want a half way convincing bonsai it would need to be big so your original plan may need a rethink. However, if you are happy with a tree in a pot then multi trunked, broom like sycamores are par for the course. I’d keep both leaders and work from there, personally. If you want to persist with your original plan, that is.

cmeg1 said:
I do not belive that to be campestre field maple
Click to expand...

I think I'm seeing what you are. The campestre leaf is not serrated on the edges like this. Almost smoothe edges with one or two bulges along the fingers, but not serrated with fine teeth, and a bit more deeply divided fingers.

Aha - thank you for your answers! Live and learn - hopefully what I think is oaklings won't turn out to be Saguaro cacti ...

I'll just keep growing it to have something to work on with the basics, as I am rather fond of it. Edited the tags (can't change the title) to reflect the correct specimen.

It appears to be a maple as it has opposite leaves, not the alternate leaves of a sycamore. Also, sycamore leaves do not normally have indents as deep as this. I say normally, but I will rephrase and say I have never seen sycamores with leaves indented this deeply, and I see sycamore every day, as I do maples. Besides there is the factor of the opposite rather than alternate leaves. I suspect it is either a red maple, A rubrum, or a hybrid maple.

cmeg1 said:
I do not belive that to be campestre field maple
Click to expand...

Woocash said:
Yes for a start it is a sycamore, acer pseudoplatanus, not a field maple. Not a species regarded as suitable for bonsai because of its large leaf size, but a nice species nonetheless.
Click to expand...

Right. And if you're really interested in bonsai and improve your skills, it can be a good beginner's experience.

I'm sure that you can find cheap nursery material like field maple (Acer campestre) or others near where you live.


penumbra said:
It appears to be a maple as it has opposite leaves, not the alternate leaves of a sycamore.
Click to expand...

Er... ALL maples have opposed leaves, including Acer pseudoplatanus, the sycamore tree.

I know where the mother tree is standing (neighbour property), so I could make a photo or two of it. It's in bloom at the moment.

SevenOaks said:
I know where the mother tree is standing (neighbour property), so I could make a photo or two of it. It's in bloom at the moment.
Click to expand...

SevenOaks said:
I could make a photo or two of it. It's in bloom at the moment.
Click to expand...

Yes, it is most likely an Acer Pseudoplatanus, since I am living in Europe (Germany). I don't think it is put there on purpose, it grows in the corner behind an old shed, so I would be surprised if it was an Occidentalis. I'll see if I can get some decent photos of it, the weather is no good (grey and rainy) at the moment.

here is a comparison, we have sycamore growing like weeds here 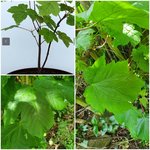 ive never seen a good bonsai one, even the full size ones are ugly

Life got in the way but since I wrote that I was going to post a few photos of the mother tree - here goes ...