My “nearly dead” JBP is recovering!

Ok, folks, here is one for educational purposes!

My beautiful Formal Upright JBP nearly died. It was out in California for two summers where it experienced two summers of extreme heat and fungus.

I was able to get it home last fall. But when I got it, most of the needles were “burnt”. Many were brown, some had some green, but were also yellow and brown. Some were red tipped! The tree literally looked as if it were in a fire!

My theory is it was damaged by
A combination of bad water, high heat, and needle blight brought on by excess w
After in an attempt to overcome the heat!

So, when it came home I treated it with copper fungicide, and Bonide Infuse Systemic Granular Fungicide.

Over the winter, it didn’t “improve”, but it kept what little foliage it had. In spring, it started weakly sending out new shoots. I removed the totally brown needles.

Then, in April, we got hit with a late hard frost! That zapped the new shoots!

I was afraid I was going to lose the tree.

I fertilized with my normal fertilizer in spring, but at a lower than usual dose. The tree is weak, I don’t want to give it a heavy dose.

I gave it another treatment of fungicide.

The old needles have been slowly dying off. It looks horrible. 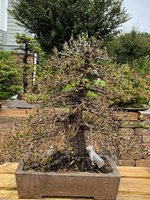 This tree used to be fabulous! In fact, a couple of years ago, I was planning to take it to the Nationals this year!

Here’s a picture of what it used to look like: 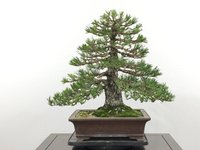 And that picture was taken just after decandling, so it would be much fuller!

It has been back budding! I think it’s going to recover.

Here, you can see some of how it’s back budding: 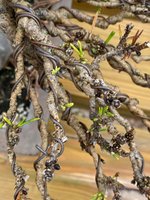 It’s doing that all over. Tons of little weak buds all over the tree. If it survives, (and it’s still an “if”), it will be better than ever since it will have all these little branches closer to the trunk!

This JBP is about 100 years old. It’s an import. Imported about 30 years ago, I’ve owned it for about 6 years. It’s the best Formal Upright JBP I’ve ever seen, and I hope it pulls thru.

I bet it will, unfortunately, be at least two years more until it recovers its former vitality.

Damn, that is one of the best formal uprights Ive seen. Such a shame. Glad to see it on the mend. I love the taper!

I heard about Boon’s problems with the water. I believe i saw that Jonas had taken some trees to help recover last time I was over there.

I found out Boon’s place is 20 mins from my inlaws so I am going to try to make an appointment to go to his Garden soon.

Sending positive vibes to this tree. Look forward to seeing it restored to former glory!

I think you should apply for jpb covid relief fund! Of course I'm jk, I hope your beautiful tree recovers

I bet it will, unfortunately, be at least two years more until it recovers its former vitality.


So is this a result of Boon's relocation?
Click to expand...

Yes. He moved from Hayward, which has a very mild climate, to Valley Springs, out in the Central Valley.

Some of the trees made the move just fine, some didn’t. Most of the JBP did ok with it, but this one didn’t.

This one was hurt the most. Several others were also affected, and they’re recovering here, but I’m not going to decandle them this year.

That would be a devastating loss. Glad it looks like it's fighting to recover.

Carol 83 said:
That would be a devastating loss. Glad it looks like it's fighting to recover.
Click to expand...

Yes, it would. Right now, there are little buds all over the tree. I’m keeping my fingers crossed!

I’ve had a “similar” experience with a JBP I bought years ago, in the winter, from a grower in Oklahoma. He sent me pictures of several he had for sale, I I picked one. I asked about the nebari, and he replied with something like, “nebari! I suppose it has some, but I can’t tell, the soil is all frozen”!

I bought it anyway. He shipped it to me in February. It looked just fine. Well, that spring, it didn’t grow. At all. It didn’t die, or turn yellow or anything, it just didn’t grow. No new growth. The buds just sat there.

Until July. When I decandled all my OTHER JBPs. Naturally, I didn’t touch it. I just let it do it’s thing.

The following spring, it grew just like all the others, and I decandled it, and it’s been fine. 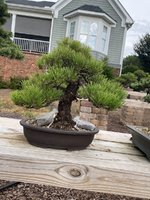 So, that one gave me a scare, but it’s recovered and done nicely.

I’m hoping I can repeat that with this one.

Sorry to hear and see what has happened to your tree. I too hope for a full recovery and hope those buds that you are putting your hope in do in fact save the tree. It is hard looking at the tree in the condition it is now compared to what it should be so let's see what the future holds for it, I'm sure you'll do the very best you can for its recovery.

Would it help at all to do some pruning on the longer branches or would that have a negative effect?

Well… there are a lot of dead tips that I will eventually have to remove. But cutting them off now would only increase the trauma the tree is experiencing. So, I’m going to wait until fall, when the tree should naturally start to reduce the sap flow, and do it then.

Right now, “Mother Nature” is letting this tree recover. I’m not going to do anything to stand in her way!

Side note, how do you find 70 year old JBP's to import? I want to train one that age for 30+ years myself!

Agriff said:
Nooo, I was just reading your thread with Anthony from 2014-2015 with this tree!!

Side note, how do you find 70 year old JBP's to import? I want to train one that age for 30+ years myself!
Click to expand...

This one was imported about 30 years ago. I didn’t do it. I bought it from the lady who imported it. It was easier to import trees back in that time.

I wonder what happened to Anthony?

Adair M said:
This one was imported about 30 years ago. I didn’t do it. I bought it from the lady who imported it. It was easier to import trees back in that time.
Click to expand...

Ah, that makes sense. It's true that I don't see many trees freshly imported from Japan these days. I want something with that girth/height so bad though! It must have been such a pleasure to develop it over these decades.

Wow good resuscitation work on this one, If when it pulls through I would name this tree Lazarus. Did all the main branches manage to bud out or do you think you may loose some?

Lutonian said:
Wow good resuscitation work on this one, If when it pulls through I would name this tree Lazarus. Did all the main branches manage to bud out or do you think you may loose some?
Click to expand...

So far, all the branches have new buds and needles, but it’s still extremely weak.

I will not let this one get in freezing weather this winter.

Adair M said:
So far, all the branches have new buds and needles, but it’s still extremely weak.

I will not let this one get in freezing weather this winter.
Click to expand...

How are you going to protect it?
You must log in or register to reply here.