I imagine a lot of people hang onto their first tree for sentimental reasons, even if (like this one) it is mostly crap. This "ginseng ficus," grafted by the grower with both standard microcarpa and green island foliage, has been grown out and severely cut back a number of times. Several years ago, I successfully approach grafted one of the standard branches onto the green island main "trunk," in a vertical orientation. What I did not realize is that the standard would grow much more rapidly - leading to the obvious reverse taper at the graft site. I have been attempting to fix that by approach grafting a standard branch onto the green island trunk below the graft site, and will graft another standard branch going in the opposite direction this summer. I have and probably will continue to see and remove green island foliage that buds out from this area. Just another odd quirk of this tree.

It also produces copious aerial roots whenever humidity is over about 70%. The heavy columnal roots you see were produced about 11 years ago, without much effort. Whatever magic gave me those has been difficult to repeat for some reason, but possibly in the next year I will add a humidifier to my grow tent setup, and attempt to create a mass of roots to cover the grotesque (Rubenesque?) form of the "ginseng" roots.

Long term, I hope to develop a spreading, banyan-type canopy. This should be easier now that I am growing under intense LED lights. 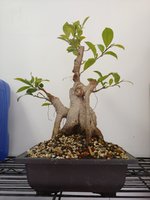 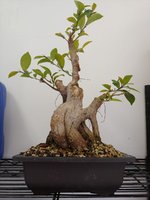 I have a hair shirt and a dead horse for sale, -just in case you're in the market?

Forsoothe! said:
I have a hair shirt and a dead horse for sale, -just in case you're in the market?
Click to expand...

Defoliated and partially wired. When it leafs back out, I plan to pack that gap in the base with sphagnum and wrap with plastic to grow roots and hopefully fill in the space. In the long run, after the next graft takes on the center trunk, I may cut off the top few inches and grow a crown from the grafted branches. 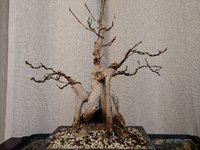