My name is Julian. I've been getting extensively into bonsai the past 6-8 months and I've been training several mostly pre-bonsai trees. I've been reading a lot of articles, pdfs, books, as well as many videos and attending several shows. Of recent though I've been frequenting this site a lot and its provided me with lots of information and interesting threads. That said its been overdue that I start posting and hopefully later contributing myself.

A few months back I acquired a small-mid sized foemina juniper from the San Diego Bonsai show for an affordable $30. There was a lot of dead branches on the lower tier as well as a lot of dead needles. I have since repotted it which it accepted quite well with new growth forming all over the plant. I have jinned, wired, and repositioned branches best I could to fix imbalances in its structure. That said I still am unsure of how to work with the apex with is just one skinny branch next to the jin with foliage on it. The upper tier branches need a lot of work too. For the time being I plant to let all the buds and growth extend before I do any further pruning for defining the foliage pads.

Please excuse the poor quality pictures and the sloppy wiring. With practice I should hopefully be doing cleaner work. Below is a before and a recently taken after picture: 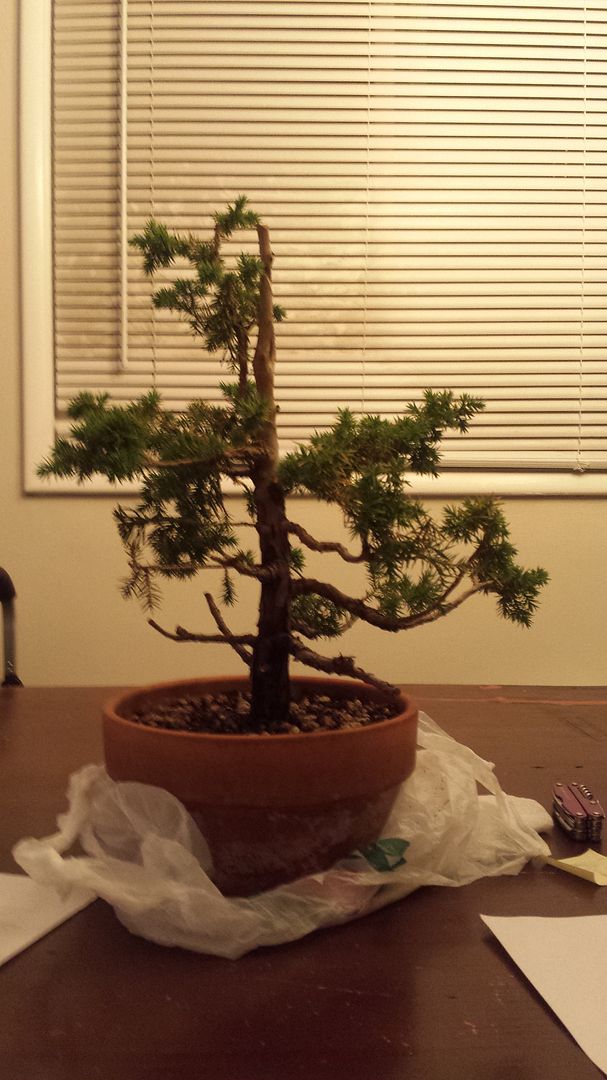 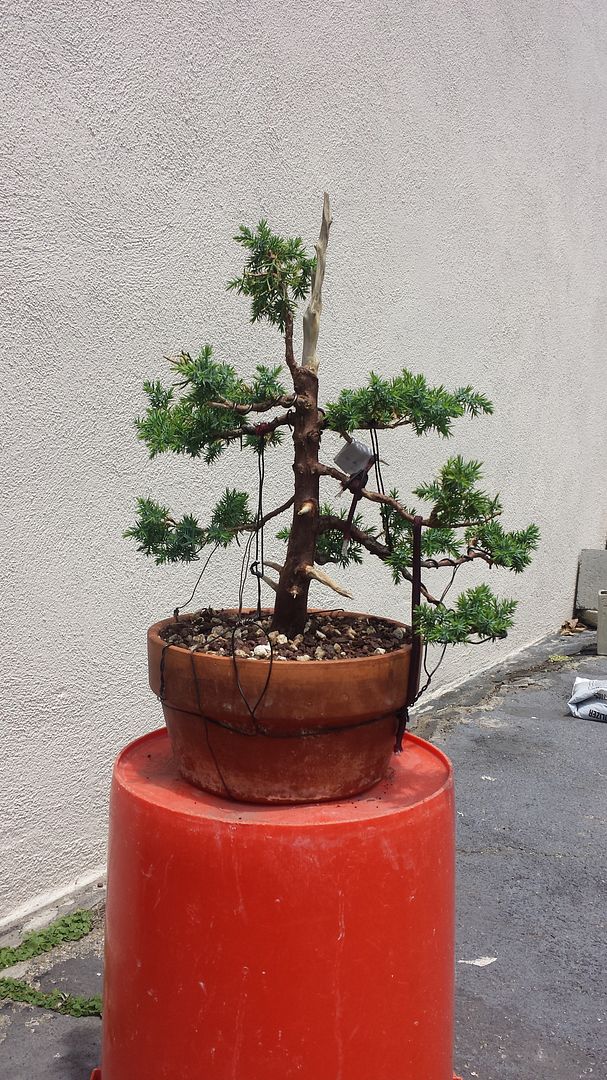 I would like a more compact design, but due to the lack of inner foliage and branches I don't think I can reduce it too much. Anyhow any comments, advice, or tips will be accepted.

Thanks for the links. I actually live in Arcadia in the San Gabriel area which is closer to LA. San Diego is a few hours from where I live. Though when I do visit San Diego I'll look out for the guy you mentioned. The club closest to where I live is the Santa Anita Bonsai club which I am joining.

Good for you. Put your general living area in your avatar area and people can give more specific directions. If you can seek out Ted Matson. he gets around to all of the SOCAL clubs. He is very good with foemina. here is a group that Ted did several years ago.

I would like a more compact design, but due to the lack of inner foliage and branches I don't think I can reduce it too much. Anyhow any comments, advice, or tips will be accepted.

Looks great so far. You won't have to worry about foliage on this one. within about a month you are going to be back here wondering how to slow it down. You can reduce each foliage cloud by half right now and it will back bud in old wood if that what you mean by more compact, (shorter branches?).

Here is a suggestion you may think about moving toward.

1. The right hand branch (arrow) is too long and the foliage is all out on the end. Keep it pinched/pruned in hopes it will backbud. Meanwhile develop several sharp side-to-side bands to help give it the impression of being a bit shorter.

2 The left hand branch (arrow) should be bent toward the back of the tree.

Otherwise, shorten the jin, and get the foliage back closer to the branches (and the trunk, if possible) as well as a bit neater looking (not necessary, but it will make you feel better about the tree). Get rid of some of those lower branches.

Then, LET IT BE for the rest of the year -- aside from routine pinching/pruning of foliage pads.

Good luck, and have fun..

Thanks for the feedback. I was under the impression that foeminas do not bud on old wood, so I'll prune accordingly now. All my foliage pads are too long and messy at the moment, but I'm waiting for them to grow out a bit to ensure the tree is established since I re-potted this season. I'll probably cut then back in a month or so. Hopefully that right branch backbuds. I am a bit unsure of removing the lower branch completely though. Most of the foliage is on the opposite side of the tree that I've brought around with wire to make the front look more balanced. There is a tuft of foliage at the fork of the lower right branch I can cut back too if needed. Anyhow I appreciate the visual aid and I'll work my tree accordingly.

Here I'd an update picture. I pruned the mid right branch back several times over the summer but could not get it to successfully back bud near the trunk. I will attempt to graft a branch there and probably will ask for advice from my local club. The lowest left branch will be reduced next growing season. Primary branch development has begun on some of the pads and will need refinement over the years. From the previous picture one of the lower branches and jins were removed. Pads have been reduced greatly but are left a little long to thicken the primary branching. Any comments or suggestions are welcome. 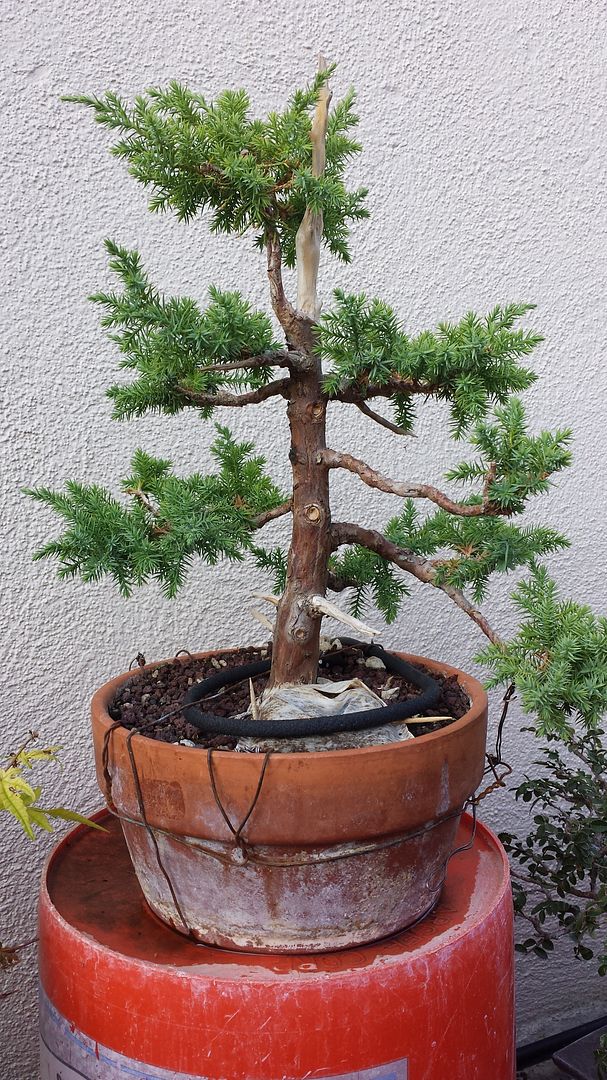 I bet if you let it go wild next year and cut it back hard as late as you can, you'll get it to backbud.

I bet if you let it go wild next year and cut it back hard as late as you can, you'll get it to backbud.

Maybe. I want to ask a few local club members if grafting that middle branch would be viable. If not I will do what you suggested. In any case that branch needs work.

I only know of Foemina the thread F perpetrator.

Please don't listen to me. It only sounds doable.

New front! Branches brought significantly lower and will be cut back again mid summer after growth extension. Also grabbed a large 3 inch trunk foemina with fantastic nebari today. Will get pictures when I can. Top growth jinned and cut at a slant. One large bottom branch was removed and a oversized top branch was given a little shari in hopes that it will make the branch look smaller.

I wanted to lower one of the top branches so I made a v cut under it and used guy wires to lower it down. Unfortunately the cut was too big and the branch split at the top. Foemina's grow fairly fast so I'm hoping both the bottom and top callouses over within 3 years or so. If it does the new position of the branch would have been well worth it. 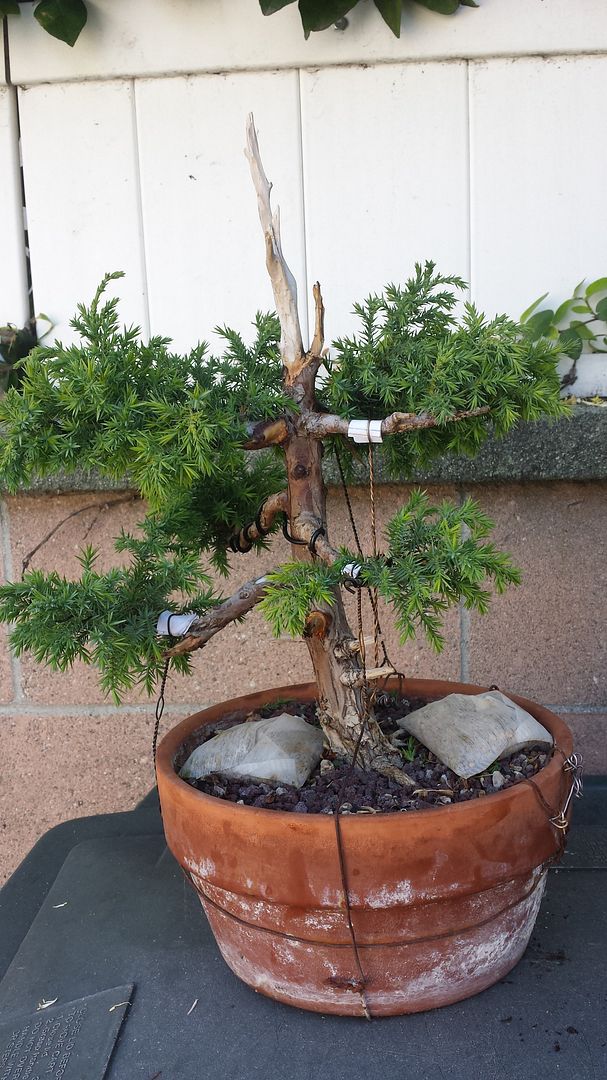 bleumeon said:
Maybe. I want to ask a few local club members if grafting that middle branch would be viable. If not I will do what you suggested. In any case that branch needs work.
Click to expand...

If I was you, I would graft shimpaku juniper on all of its branches. I hate the needle sharp leaves of Foemina!
Bonhe

bonhe said:
I hate the needle sharp leaves of Foemina!
Click to expand...

Understandable, but I think I'm developing something akin to 'Stockholm Syndrome' and rather like working them now

bleumeon said:
Also grabbed a large 3 inch trunk foemina with fantastic nebari today. Will get pictures when I can.
Click to expand...

The growth is still pretty new so I want to let it extend out before I cut it. I could cut it now but it might weaken the tree a little.

Also here are the new foemina pictures. I purchased it from San Gabriel Nursery. I had a 20% off bonsai-a-thon coupon so I was able to get the entire tree on par with pricing for say landscaping plants. Its 3 inches at the base with a slightly over 2 inch trunk. Root spread on all sides. I cut off some larger branches so I can begin exposing sun to the interior and started an airlayer on the largest branch. I'm hoping by fall I can remove the air layer and begin dedicated work to the main trunk. 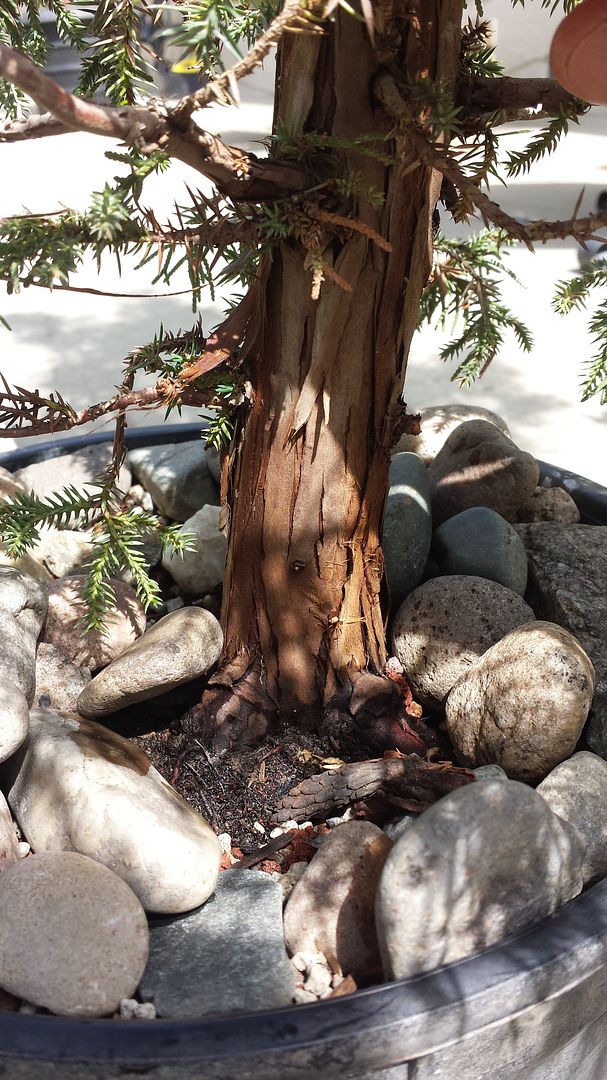 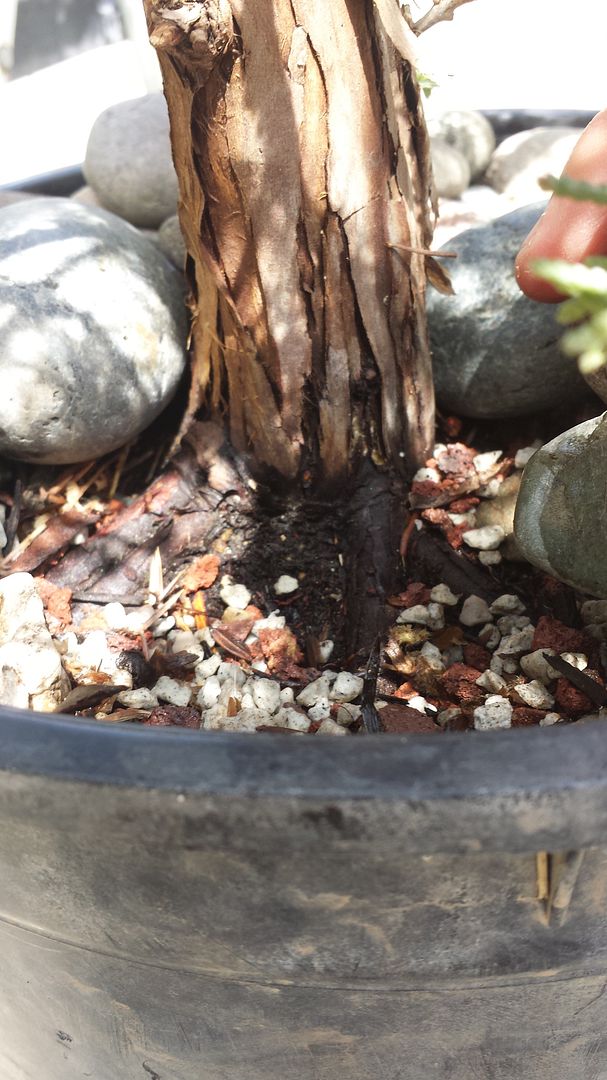 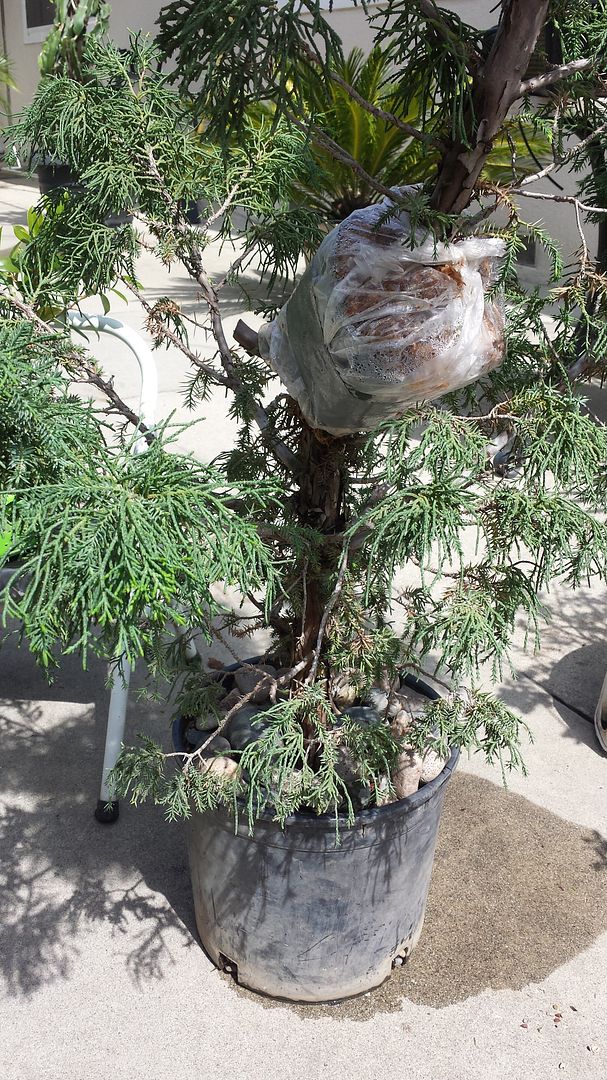 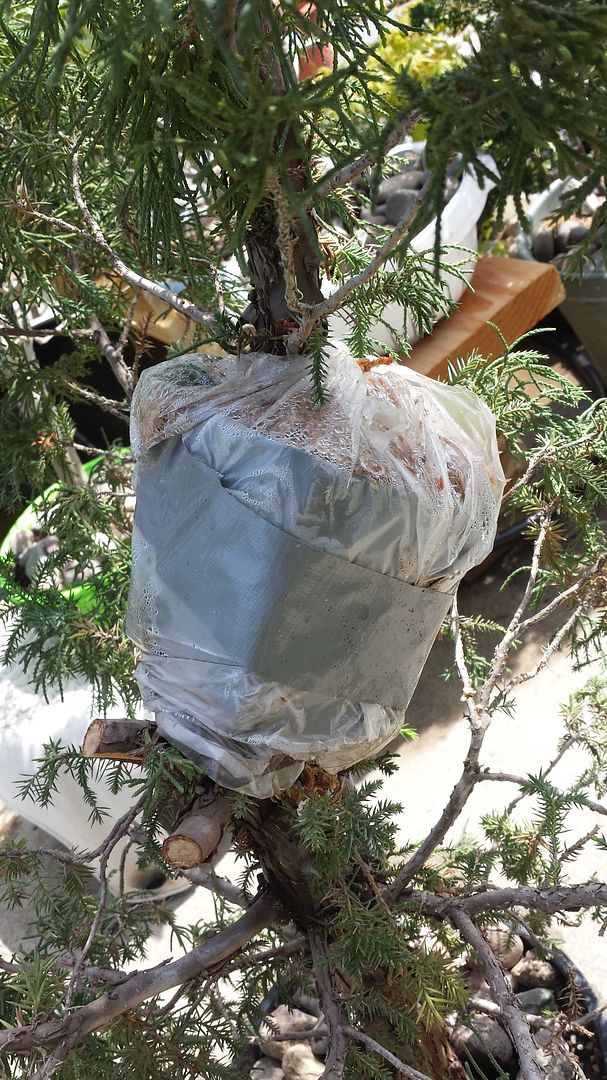 Not too much to photograph right now, but the tree is over 5 and a half feet tall.

bleumeon said:
the tree is over 5 and a half feet tall.
Click to expand...

Cool. How tall will the remaining base/trunk be after the air layer is removed?

ColinFraser said:
Cool. How tall will the remaining base/trunk be after the air layer is removed?
Click to expand...

About 13 inches. I feel a bit short for the image I want to make. These grow fast so I should be able to create a new leader though.