I have primarily pines. I have had none of these trees for more than a year. I have repotted, wired into beginning style. the Ponderosa'a are Yamadori. Most of the rest are nursery stock. All have a long way to go.

Seems normal, for around here.

Carol 83 said:
Seems normal, for around here.
Click to expand...

No one mentioned this action shot! I noticed the cute lil pup, but then the flying cat!

Of Toads and other Pets

Hopefully this will keep us going thru..... Oh hell no. Show your dogs, frogs, and snakes on a log. Tigers? Chimps!? Horses? Sheep? Sorce

sorce said:
No one mentioned this action shot! I noticed the cute lil pup, but then the flying cat!

Of Toads and other Pets

Hopefully this will keep us going thru..... Oh hell no. Show your dogs, frogs, and snakes on a log. Tigers? Chimps!? Horses? Sheep? Sorce

A little before and after. This is a crab apple I think, according to sorce? Trunk has about doubled in thickness in 6 months since I pulled it out of the ground. It has a big new branch which I threw a scrap piece of wire on to stop it going straight up.

There's got to be a million of you!

@Shibui already mentioned @Clorgan has a vibrant energy for this thing. I can see her leading a bunch of Newbs into a future greatness.

Even if you've posted em elsewhere. Throw em here too! It'll be a good place to check the progress of our Covid Newbs!

Cheers @Clorgan ! You make this a better place!

Well I guess I am a Covid Newb although I have always been interested but never dabbled until I suddenly had time on my hands thanks 2020.

Right now I have a number of seedlings which I am aware will take forever to become anything but I still enjoy taking care of them. And a small cluster of 5 various Acer Palmatum pre-bonsai material nursery stock. I absolutely love Japanese Maples if you could not tell from the user name and am currently letting them grow wild to work on trunk thickness.
M

I got my willow leaf ficus almost exactly a year ago, but I got a cheap grow light and started doing some research once pandemic hit. Big difference compared to my sad window!

Just this week I noticed some leaf loss... I think it got really thirsty recently, and me guessing the water level from the pot weight isn't so reliable. This forum will help me a lot, since I want to take care of this one and get more plants in the future. Glad I found y'all

I thought they'd be fine in the same pot for a year... underestimated their growth and tiny looks to be suffering. It looks like it's trying to get away from the big one.

Some young cork oaks I am training.

A few pictures of my (mostly pre-bonsai) trees.
A couple of pictures of my potted trees (in front of the shed). There's some Zelkovas, a golden larch, a bigger Japanese larch, a dawn redwood forest, a cotoneaster and a couple more. In front of them is a mixture of Lonicera, crab apple, goji berry, pomegranate.
Then there's a picture of my junipers, cryptomeria, small Scots pine and a big cotoneaster.
Then the last two pictures are of the trees on my gravel area. Some different acers (butterfly, katsura, atropurpureum), beech, a yew, a European larch, a bigger dawn redwood, a quercus robur, a field maple, a small Korean hornbeam, some Kojo no mai... And probably more I've forgotten.
I've actually started to plant some out in the garden as I realised I was collecting so many it was starting to look more like a nursery than a collection of pre-bonsai. And I've told myself I can't get any more until I get these ones started.
(Oh, and in the house are four or five ficus, and a load of portulacaria trees and cuttings).
Phew!

Here's one of mine, it's an ERC none of my trees are really nice, but they are still mine. I just spend the season learning the horticulture and trying to keep them alive.

hey everyone, I’m new here nice to meet you all.

I probably started doing and learning bonsai early this year. I live in a rural area. so here I don’t have a lot of access to a wide range of trees unfortunately, however there is this magnificent bonsai garden out near me and the man that runs it has a beautiful collection I believe he has been doing it for 40 years. Anyway he has taught me a lot and “taken me under his wing I guess”

i am loving bonsai and the whole community as I find bonsai super calming for me as I have anxiety. Anyway I don’t have as much mature trees as others I’m sure, but I am hoping one day to have a display in my backyard for decades. My favourite tree is probably a juniper shimpaku I believe I have two. Anyway tell me your thoughts or ways to improve or techniques. I’m always eager to learn something new. 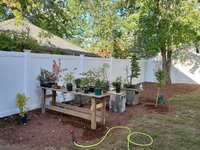 Developed a specific area for the trees this fall! Also built a bench from scratch with my teacher which was a fun project. Will refine the area in spring with more landscaping, a windbreak, probably a small greenhouse.
K

I've always been interested, and killed a mallsai about fifteen years ago during high school

I got really excited and picked up this Parson's juniper on Oct 2. I've since dug out some nibari and pruned it back some. I read somewhere that it's very hard to shrink the foliage on this variety, so I don't have too much hope for this one. It's still good practice, and it's looking a lot more dramatic now 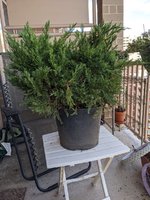 Today I took a trip out to Meehan's Miniatures, and picked up two more nursery stock to try and keep alive over the winter. First up is an American Hornbeam. I think my eventual goal for this is a general broom. The advice I was given today was to give it a trunk chop just above or below the lowest branch before spring, and it should sprout up quite a bit. 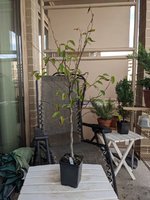 Second pickup is a Chamaecyparis 'Little Jamie', for which I'm planning on a formal upright 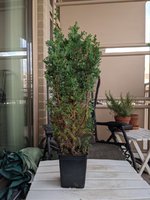 There's some excellent nibari already on this one 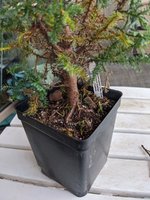 Both of these are going to go into bigger nursery pots for quite a while to let them trunk up for a while. I'm plannig on potting soil with horticultural charcoal added to increase drainage and prevent overwatering. The Chamaecyparis's interior definitely needs to be cleaned out, and I'm going to prune back the side trunks and wire them out to open it up some. Any advice or insight?

I started bonsai about 1 year ago. Here’s a tree I collected last year, did initial wiring yesterday. Here’s a before/after 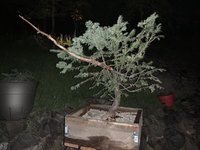 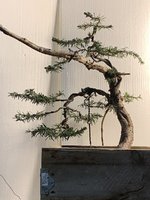 Thank you for the warning! I have learned about that and intended to only completely remove entirely dead branches. Reducing the long non-trunk leaders is the only other pruning I'm planning on right now. Cleaning out is probably the wrong term. Just wanted to acknowledge the amount of yellow/brown needles around the trunk. Not much to do for those now

I am planning on keeping pretty much everything else, including the lowest tiny branches. If I understand the concept, those should be sacrificial branches that'll help thicken the trunk relatively quicky, right?
You must log in or register to reply here.